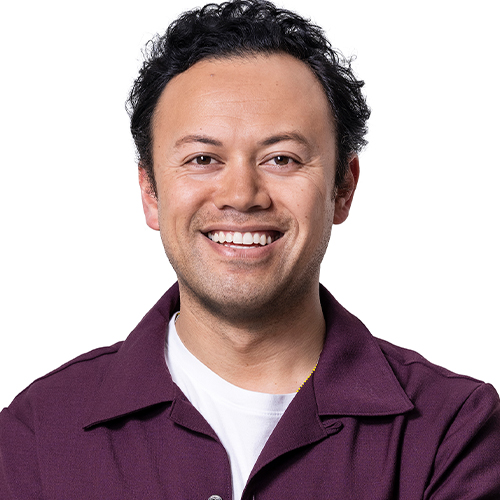 There's more to Rarotonga than pristine beaches and tranquil lagoons. As Dan Ahwa discovers, it's also an ideal gastronomic destination for food lovers, changing the way food is being enjoyed and experienced in the Pacific.

"Cook Islanders are born knowing how to sing pitch perfect," laughs my boat mate Memory, guzzling punch from a tin cup before offering me some of her homemade concoction.

It's 10am on a Sunday, and while most Cook Islanders are singing hymns at Mass, I'm on a glass-bottom boat with about two dozen people, a mix of tourists and "Cookies" as the locals are sometimes affectionately called.

Ten minutes into our journey, the captain and his crew break out into a chorus of songs, accompanied by the melodious sound of ukuleles and beating drums. Memory, a local survey planner and a woman who would have no problem drinking me under the table, is already on to her third cup of punch. "I don't know what I put in this, but I wanted something tropical!" she laughs. "There's white wine, Malibu, some gin and some orange juice. Oh and some fresh watermelon. Try some of my punch, honey, you need it!"

A group of Cook Island women seated nearby break out in howls of laughter. I blush and do as I'm told, taking a swill of Memory's punch.

We're part of a group heading out with Koka Lagoon cruise for a half-day excursion of snorkelling, coconut husking and traditional weaving before anchoring at the Tikioki marine site for a delicious barbecue and a swim in its surrounding clear waters.

Like Memory's two-litre cooler of punch, the barbecue and much of Rarotonga's wider gastronomic offering is an intoxicating mix of flavour and variety. As I discover during my visit, food is best presented as a smorgasbord of options, and for our lagoon lunch we are treated to an open barbecue of fresh fish, beautifully seasoned meat and salads made from sweet local papaya and mangoes.

So far Rarotonga is making my mouth water. As the Cook Island's largest island out of 15, Rarotonga is changing the perception of its food scene and influencing how food experiences have become an important part of enjoying the Cook Islands and even across the Pacific.

At the end of the rainbow: Fiji away from the crowds

Two engagements, a wedding and a baby: Why Lorna Subritzky loves Rarotonga

Curse of Vaimaanga: Inside the Cook Islands ghost resort

Several eateries and cafes pandering to tourists are also seeing the value in promoting cafe-style food, but with an emphasis now on local ingredients, more than ever before.

There are the usual visitors from Australia and New Zealand (the New Zealand dollar is used here), but there's also a large number of Americans and Scandinavian tourists too, and catering to those taste buds requires little effort when most of the food on the island highlights fresh fish and seafood.

It makes sense for the locals to put their best foot forward when it comes to providing visitors with interactive experiences connected to its food. After my day swimming in the lagoon and feasting on a barbecue at the beach, I say farewell to Memory who's already dozed off, as I head back to my resort for an entirely different food experience. The progressive dinner, hosted by Cook Island Tours has proved to be a popular activity for visitors yearning for an authentic food experience.

I clamber onto a bus with about half a dozen strangers heading to three local homes for three progressive courses: entree, main and dessert.

The first couple hosting for the night take us on a tour of their taro patch across the street, showing traditional growing methods, before we return to their home to sample fresh Ika Mata — raw fish mixed with chopped tomatoes, cucumbers, lemon juice, coconut cream and, of course, thinly sliced taro.

The main course, hosted by a Tongan woman married to a Cook Island man is a riotous hour and a half as the matriarch regales us with stories of their courtship; her husband sitting quietly in the background with a ukulele in his arms, nodding and smiling at his wife's comedic tales. Apparently, after she had repeatedly turned down his advances, she finally decided to marry him because she "felt sorry for him".

Another smorgasbord features vegetarian chop suey, taro and traditional Cook Island mayonnaise potato salad, the latter proving a hit with my table mate, a woman from Arizona in her 50s who makes multiple trips back to the buffet table for more. "I just lurrrrve mayonnaise!" she says every time she sits back down.

My tip for experiencing Cook Island hospitality: enjoy the banter with the locals over good food - their tongue-and-cheek humour is part of their charm — and make sure to visit with the ability to laugh at yourself and, most importantly, an empty stomach.

Our third home for the night showcases what the hosts can do with the season's abundance of mangoes — a mango key lime pie with fresh mango ice cream and mango fruit salad. Not fun if you don't love mangoes, but what's not to love when they taste so damn good?

"There are almost too many mangoes that we don't know what to do with them all!" laughs our host, who has already gathered her superfluous bounty ready to be sold at the market the next day.

"We've been doing the progressive dinner for about six years," she says, "and we love it because we get to showcase what Cook islanders do well — food and music. We also do this to make some money. Everybody needs to eat. Food is such a big part of our culture and to share how we make our food with visitors from another country in our own home is special."

It always pays to temper a gluttonous itinerary with physical activity, so the very next morning I head out to try the Storytellers Eco-cycle tour, discovering Rarotonga's rich cultural heritage along the ancient Coral Rd Ara Metu. Meandering through the tranquil villages, our knowledgeable guide David has a decent business going as one of the more popular activities on the Island.

Our group of seven gets the chance to stop along the way and sample fruit picked fresh from the trees including mangoes, passionfruit, soursop, bananas and Kaika, a Malaysian apple.

After a refreshing dip in a fresh water cave, we head back to the main road after riding for about 12km, and end with a delicious lunch of more fresh fish and salads prepared by Dave's team, followed by a dip in the ocean to cool off.

There's plenty of local food and fresh produce to try, but several eateries have recently opened, serving modern food with an island twist. Beluga, on the main drag in Arorangi is a stylish addition to the cafe scene. Husband and wife owners Nathan Haywoad and Lou Christy left the hustle and bustle of Sydney's cafe and restaurant scene to set up shop in Rarotonga.

The menu focuses on local produce, fresh fish and artisan breads made by a local baker. The back half of the cafe functions as a gift shop and showcases the creative talent of Cook Island artists and makers.

For a small island that takes about an hour to drive around, you're pretty much spoiled for choice when it comes to food options, something other Pacific Islands such as Samoa or Tonga could learn from in terms of its variety. What the locals can do with imported meat balanced with its homegrown produce and fresh local fish is exceptional, whether it's resort fine dining (the degustation dinner at Manuia Beach Resort is a highlight); a buffet feast at Te Vara Nui for a night of cultural entertainment; or something more intimate at a local home.

Rarotonga's food scene is embracing its love of food with plenty of gusto — all just a short flight away.

Stay hydrated with fresh sugar cane juice: Make a pit stop to Stevie Wunder Juice, the first of its kind in the Cook Islands where Steve makes fresh sugar cane juice grown on a nearby patch. Steve uses a special juicer to create his drinks and talks you through the health benefits of drinking all natural sugar can juice.

Try non-traditional food at Antipodes: Opening last year, this al fresco restaurant focuses on Mediterranean cuisine. The Mediterranean-style villa functions as an event space and also offers accommodation, but its menu of shared plates usesfresh local produce with a Latin flavour unique on the island.

Eat at the local icon Mooring Fish cafe: Plastered on the walls are photos of famous faces who've visited here — Carol Hirschfeld, Temuera Morrison, Stan Walker and Tim Shadbolt to name a few. This Rarotongan institution is a must for the best fresh fish dishes in town.

For the best burgers head to Vili's Burger joint: This cheap and cheerful establishment is perfect when you're after a quick, easy meal. Its hearty burgers are a favourite among locals. Try the vegie burger or the Muri burger — beef, cheese, bacon, pineapple, lettuce and secret sauce.

Don't be afraid to eat low-brow: The locals highly recommend Palace takeaways, the McDonald's of Rarotonga or RFC — Rarotonga Fried Chicken. I tried both and can safely say they are worth it, if only to experience what guilty food pleasure the locals like to indulge in. Also perfect after a night out at the Island's notorious nightclub Rehab, or if you want to see where Zac Guildford got into that infamous kerfuffle, try Trader Jacks, conveniently located next door to RFC.

Take a food tour with Tik-e-Tours: Earth friendly e-limo tuk-tuk or e-bike is a great way to explore the Island. The team here are well versed on the culture and history of the Island, tailoring a day long excursion around the best food spots to try.