Whether you’re looking to buy or rent, OneRoof.co.nz has everything you need to find your dream home.
© Copyright 2020
NZME. Publishing Limited
test test test
2014: The hottest year on record
17 Jan, 2015 11:22am 4 minutes to read

It is the race that is not actually a race. Yet. The announcement, late last week, that twice failed Republican presidential contender Mitt Romney is contemplating a third run at the White House in 2016 has sent a frisson through conservative ranks, as a large Grand Old Party field - at least 15 possible candidates - eyes the prize while negotiating the "invisible primary".

Also known as the money primary, the process refers to pre-race jockeying, as candidates seek traction by lining up support from wealthy donors, party fixers and key campaign team operatives, before the official primaries begin in 2016.

The aim of such behind-the-scenes politicking - well advanced in both parties - is to pre-empt rivals before the whole shebang goes public.

Before news leaked that Romney, 67, was schmoozing with potential donors - or as one insider told Politico "keeping his options open" - it was assumed the GOP establishment's champion would be Jeb Bush, 61, ex-governor of Florida and scion of a dynasty that boasts two Presidents; brother George Walker Bush (2001-2009) and father George Herbert Bush (1989-1993).

Bush signalled he was "actively exploring" a presidential run in a December Facebook post. He quit corporate boards, abandoned the lucrative lecture circuit, hinted he would release a decade's tax returns and launched a super PAC, Right to Rise (political action committees can raise unlimited money but cannot coordinate spending with a candidate's campaign), that praises "merit, hard work and earned success" - all signs of White House hopes.

His connections suggest Bush would bring serious money to any campaign.

"The Bush family has been a force in fundraising," says Bob Biersack, a senior fellow at the Centre for Responsive Politics. "When Jeb's father made his first presidential run in 1980 he didn't have a national reputation, but he raised a stunning amount of money.

"Largely out of the Texas oil patch. And George W. just cleared the field in 2000.

"He raised so much money in the early stages of the race that he did scare off some potential candidates."

Coups save face for Obama

Tommy Wilson: A new year and another new era

A tsunami of money has flowed into political coffers, channelled through more than 1200 super PACs. The other approach involves collecting small sums from tens of millions of grassroots donors.

Both sources would likely be necessary for a successful campaign. Barack Obama - often credited with kick-starting the mass-funding approach - needed initial backing from wealthy supporters in Illinois to create his campaign apparatus, before he went out on to the road in 2008, when his charismatic style fired up tens of millions of Democratic supporters.

Nothing is certain in presidential politics. Hillary Clinton looked to have it made in 2008, until Obama streaked past to the finish line. Nonetheless, a strong push in the invisible primary could help Jeb Bush vanquish any mainstream rivals, such as Chris Christie and Marco Rubio, the respective governors of New Jersey and Florida. Romney's move complicates matters.

Many expect to see blood on the floor.

"We're seeing the first shots of the war between clan Romney and clan Bush," Alex Castellanos, a GOP operative who has worked for both, told the Washington Post. "Both bring to the battle incredibly powerful fan clubs as well as wounds they have to heal. How ugly could it get? You're only competing to lead the free world."

Others predict a Bush-Romney slugfest in the 2016 primaries would be brutal because, absent big ideological differences (which Bush would have with Texas senator and Tea Party icon Ted Cruz, or libertarian senator Rand Paul - tipped as contenders) they would focus on personalities. 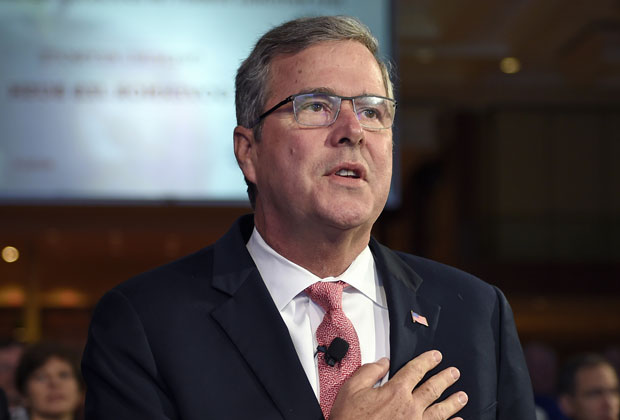 According to Politico, "the two men are on a potential collision course", a scenario that foreshadows brutal negative campaigning if both run. Bush's brother is widely unpopular for presiding over the 2008 global financial crisis and the disastrous, open-ended military adventures in Iraq and Afghanistan.

Romney ran a lacklustre campaign against Obama in 2012 and was vilified as a rich man out of touch with average Americans. His Mormon faith also alienates evangelicals, dominant on the GOP right.

Bundlers, or top fundraisers, predict both men can find enough money to fuel their bids. But other rivals will likely be starved of oxygen. Bush has his family network and Florida contacts. Romney has connections dating from his profitable career as a Wall Street equity manager.

Biersack thinks Romney may have acted to prevent "his supporters, his people, from committing to someone else". Like Bush. After Romney, the GOP deluge.

Hopefuls include a slimmed down Christie, buffing his reputation after being tarred by 2013's Bridgegate political scandal. Christie's image as a working-class bruiser may woo ordinary folks. Ray Washburne, the Republican National Committee's top fundraiser, is reportedly preparing to join a Christie campaign, fuelling speculation the governor will declare. "Why rush?" Washburne said when evangelical favourite and 2008 presidential candidate Mike Huckabee quit his Fox TV show to test the waters.

But Christie may need to move fast before Bush and Romney stripmine mainstream donors.

Besides Cruz, Paul and Rubio, the wider GOP field includes Texas governor Rick Perry, who has made multiple trips to key primary states since his 2012 White House run; Louisiana's governor, Bobby Jindal, who is "thinking and praying" about a run; and Wisconsin's governor Scott Walker, a wildcard outsider with evangelical and anti-union credits.

And in a party acutely aware of its shrinking white demographic base, Rubio is a bridge to the growing constituency of Latino voters - a Democratic bailiwick. Bush, a Catholic convert with a Mexican wife, will hope he has an edge, bolstered by his support for immigration reform.

This stance, plus support for education standards, alienates the GOP right. Instead of tacking right, then clawing back to the centre, as Romney failed to do in 2012, Bush says he would "lose the primary to win the general", standing on principle. "That is not an easy task." The trick would be to win enough primaries to stay in contention, a bold - and likely costly - strategy.

On the Democratic side, Clinton is regarded by many as the de facto candidate and a formidable opponent. She is believed to have used the invisible primary to see off challengers. Senator Elizabeth Warren, admired as someone ordinary Americans can relate to, says she will not run. Because the election is an open seat - Obama cannot stand - the potential field is growing. Those to watch include Virginia's ex-senator Jim Webb and Maryland senator Martin O'Malley.

The Federal Electoral Commission says 153 people have filed paperwork to run for the White House in 2016 but the majority cannot be considered serious contenders.

Looming over the invisible primary is a conundrum with huge implications for the deeply divided - some say dysfunctional - GOP. Can any one candidate unite the party's disparate elements after years of internecine conflict? Failure to do so could mean at least four more years locked out of the White House.

For a party that has a pachyderm as its emblem, that is the elephant in the room for any Republican candidate.

Main contenders
Mitt Romney, 67
Republican Party's nominee for the 2012 presidential election.
Lost the Republican presidential nomination in 2008 to Senator John McCain.
Governor of Massachusetts from 2003 to 2007.
A fifth-generation member of the Church of Jesus Christ of Latter-Day Saints, or Mormon church.
Born into a well-off family and raised near Detroit, Romney was exposed to politics early. His father, George, was chairman of American Motors and governor of Michigan from 1963 to 1969. George Romney lost a bid for the Republican presidential nomination in 1968 and served in President Richard Nixon's Cabinet.

Jeb Bush, 61
A son of former President George H.W. Bush (1989-1993) and younger brother of former President George W. Bush (2001-2009).
Governor of Florida from 1999 to 2007, the only Republican to serve two full four-year terms as Governor of the state.
A fluent Spanish speaker whose wife, Columba, was born in Mexico, and whose three children were raised bilingual.
In 1995, Bush converted from Anglicanism to Catholicism.

Auckland City Mission has some high profile support for its centenary.