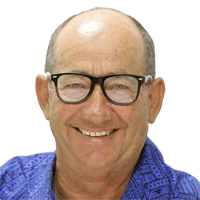 Everything about One Love is magical as if woven together like a fine feathered korowai of aroha. The kai was fit for a king, while the atmosphere was orchestrated to look organically put together, but it ran like a finely tuned watch from first act on Saturday morning to the final show on Sunday night.

The true colours of the One Love korowai was for me the line-up of excellent bands, masterly chosen by Alvarez himself. You had to be the cream of the global reggae crop to make it on to his main stage and many who may have thought themselves a shoe in were left standing and watching from the crowd.

After two sun soaked days and 20 groups later, in my opinion the master put the pick of the crop on as the very first act on the first day, a relatively unknown band called Common Unity, and that is saying something given the last band was UB40.

I first saw UB40 in Sacramento California in the mid 80s and back then they were fresh and funky and full of Uncle Bob's soul. They still are, even though they are more UB60 than 40 — but for me the new face of the One Love Festival was and will again, be Common Unity.

Lead vocalist Kayz Lucas says they made plans three years ago to make the line-up.

"To have this dream come true and come to fruition has elevated our thinking in terms as to what we're actually capable of. So we're real excited for this and real humbled for this as well so, bless."

The genesis of Common Unity's Ruapehu Reggae started out as a bunch of boys, brought up on the scriptures at their Maungarongo Marae in Ohakune, where they started out jamming with Jah together. Ten years down their road to redemption from marae to main stage at One Love, their Ruapehu Reggae sound is on fire — and as fresh as a spring dumping of Turoa snow.

What was pleasing with this ten-piece roots reggae band from Ohakune is the message within the music of Common Unity. They haven't fallen into the trap of cut and pasting the culture of another continent to capitalise on their fan base. Nor do they compromise their Māori heritage.

"Personally I don't want to be repatriated to Ethiopia in Africa, the birthplace of Haile Selassie who is recognised as the founding father of the Rastafarian movement. For us as Māori our Zion is Hawaiiki, not The Caribbean."

That message comes through loud and clear in Common Unity's music.

They have managed to string both cultures into a tight and very strong reggae rope, one that will hold on to their Māoritanga, while at the same time stay fresh for an organically grown fan base who will surely grow as they do into an internationally recognised act.

Uncle Bob will be beaming after last weekend's One Love Festival, as were the faces of 20,000 who paid homage to the legacy of his music, by making the hikoi to hear the message of Rastafari Reggae bands at Ko Tahi Aroha in Tauranga Moana.

If One Love is all about honouring and celebrating the legacy of a legend in Bob Marley — then its longevity, under the 1000 strong team captained by Pilot Alvarez, is gilt edged guaranteed.

And if the man they called Pato keeps giving new talent the chance to strut their stuff on a celebrity laden stage — as he did with Common Unity, then the flight path for this first class festival will have many more generations making their annual One Love hikoi.

'That is ridiculous': The most incredible bowls shot you will see

This might be the most incredible shot in the history of bowls.
BUSINESS

Rents rise at fastest pace in a decade: Stats NZ

Strong demand and new standards for landlords pushes rents up by more than 3 per cent.
ENTERTAINMENT

Larry David's back and taking on MAGA, #MeToo, Weinstein and, worst of all, tepid coffee.