Whether you’re looking to buy or rent, OneRoof.co.nz has everything you need to find your dream home.
© Copyright 2020
NZME. Publishing Limited
Kiwisaver "Which fund?" - Bank of New Zealand: Conservative Fund
29 Oct, 2014 4:59am Quick Read

A $100m retrofit has begun in Air New Zealand's 777 fleet. Grant Bradley takes a look inside.

It's one of the biggest do-ups in town.

Air New Zealand is ripping the interiors out of eight of its widebody Boeing 777-200s and refitting them with new seats, new cabin furniture and the very latest inflight entertainment systems.

The work, which will cost around $100 million, is aimed at bringing the older planes up to the standard of newer ones and has given more than 100 engineers who faced being laid off work for up to 18 months.

The project is a combination of Kiwi-can do - relying on company design expertise and modifying some of the seats and furniture that's stripped out of the planes - to buying in United States-built seats that come ready loaded with seat back entertainment systems. Thirty-four year Air New Zealand veteran, Viv de Beus is the general manager of aircraft maintenance who heads the project at the airline's engineering base at Auckland Airport.

He says the refit is aimed at meeting the expectations of increasingly well informed passengers and standardising interiors across airline's the long-haul fleet. 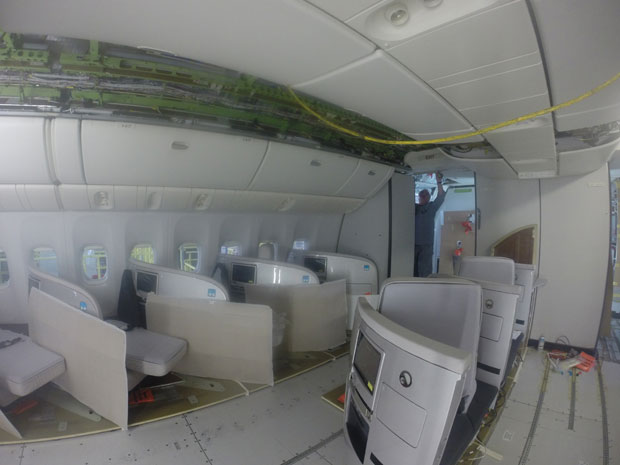 The first 777-200 refit was completed in August and the workers are part way through the second, ZK-OKE, which last week had a handful of business class seats fitted but otherwise the interior was an empty shell with the look of a tidy building site. One of the first challenges is determining which aircraft can be pulled out of service for up to 10 weeks. The refit can be timed around heavy "D checks" when parts of the plane are stripped back, fuel tanks emptied and engines examined thoroughly.

For the refit de Beus says the cabin panels are taken out to reveal the airframe in places, all the seats are taken out, the carpets and flooring taken up and some stowage bins are taken out.

Some bar units are also taken out of the plane for a complete overhaul, including the installation of touch screens for cabin crew to monitor passenger requests and a paint job in the fleet-wide taupe and ink colour scheme. Galleys are modified to enable all bins and trolleys for food, drink and other supplies to be interchangeable across the fleet of 777-200s, 777-300s and 787-9 Dreamliners. This saves crew the problem of having to figure out the intricacies of different planes.

De Beus said the aim was consistency across the entire fleet for crew and passengers.

The stripped out plane is given the ultimate spring clean and checked for corrosion and defects. There is then modification to wiring to accommodate the new IFE (a Panasonic eXlite touch screen that passengers swipe like a tablet), wall units strengthened, wall coverings altered (most noticeably in toilets) and then the seats installed, starting first in the business premier cabin. More oxygen masks, lifejackets and personal lighting has to be installed for the extra seats.

While the entire entertainment system is half a tonne lighter than the old ones, the extra seats and seat design mean the plane is slightly heavier, he said.

Changes on the flight deck are modest; new floor and seat coverings. De Beus says the work must meet new safety regulations as type certificate for the plane is changed by putting in a new interior.

It can take two to three weeks to test the systems and have the work certified by the Civil Aviation Authority.

The entire eight-plane project will take 27,000 "hands on" staff hours.

Old economy and business class seats have been sold in as-is condition to a US company that specialises in rejuvenating and on-selling them but Air New Zealand staff are modifying the business class seats themselves. In the spotless paint and composites workshop they are repainting bulkheads that curve around the seat and in another room re-covering the seats themselves.

Modifying the business class seats was cheaper than buying new ones and the finished product was better than that bought off the rack, he said.

Before the project was started, more than 100 engineers had faced the axe as heavy maintenance requirements of our newer aircraft meant they spend less time in the hangar undergoing maintenance.

The airline says it is working with the unions and staff to ensure the "best outcome" at the end of this programme for those involved.

The Engineering Printing and Manufacturing Union represents engineers (and now flight crew) working for the airline and organiser Strachan Crang said the decision to keep the refit here was welcome and had given workers important breathing space.

The union hoped the refit would attract work from overseas, although the high New Zealand dollar continued to be a deterrent.

"We still feel there's other work out there - we're still looking at anything that comes up in the next 12 months so we can get a bit of niche work out there in the hangar." 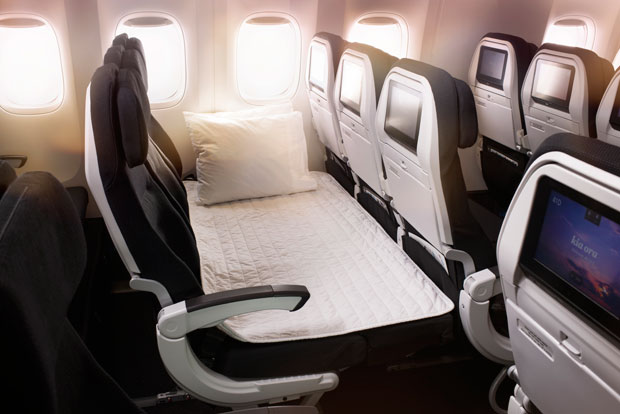 To make its interiors more consistent across the fleet by installing new seats with state of the art entertainment systems.

The airline's strong balance sheet is now allowing it to invest in new planes and products. The 777-200s are close to a decade old and the cabins were starting to date.

Are there more seats?

Yes, eight more than previously - four in economy and four in premium economy. There are now 312 seats.

Where do they come from?

Business premier seats are being rebuilt in Auckland but the others come from the United States.

Who's doing the work?

Air NZ engineers who had been facing the axe with the decline in heavy maintenance work.

Liam Dann: Don't panic, this will not sink our economy

In the grand scope of the Covid downturn the impact of this lockdown is not catastrophic.
BUSINESS

Is your Airbnb rental the secret to helping NZ tourism rebound?

But hotels which have invested billions of dollars say they want a level playing field.
BUSINESS