CaseLoad is confident his public interest mission to reveal New Zealand's best and worst judges will come up trumps.

There are plenty of anecdotes spouted by lawyers about those said to be good judges and those who appear on occasions to have dreamily shambled into court through a back door left ajar.

Lawyers are always free with their opinions on which judge is good, bad or indifferent - opinions influenced by how clients have faired before a particular judge.

For example, whether Pete the Paedo got ten years or skipped freely from the court, will always influence a lawyer's view of a judge.

Lawyers - some of whom themselves aspire to become judges - are happy to vilely gossip behind their backs, but will never publicly name drongo judges.

So how does the public know if a judge is doing a good, bad or indifferent job, is effectively meting out justice or is a muddling golden-super time-server?

How their decisions fair on appeal is a great leveller and a good sounding board.

CaseLoad has asked Chief High Court judge Helen Winkelmann and Chief District judge Jan-Marie Doogue for the names of the ten judges whose decisions have been most successfully appealed in the last 12 months.

To show this is a balanced exercise and without prejudice to the judiciary, Justice Winkelmann and Judge Doogue have also been asked for the names of the ten judges whose decisions have been mostly upheld on appeal.

Ladies & Escorts Loungers reckon this is a first step to finding out which judges give value for money and which don't.

Legal insiders say the chief judges should have this information at their fingertips because it's part of their job as chief judges to make sure other judges are up to scratch and kept on their toes.

It's another aspect of an open and transparent publicly-funded justice system, which is why no delay is expected in giving CaseLoad what he asked for.

(Negative, unhelpful and disrespectful remarks by The Scunner and others of that ilk have been deleted from this item.)

Those privileged to attend, voted the launch of

Judges past and present, lawyers, academics, distinguished entertainers and performers of varying hues joined CaseLoad in packing Old Government House (now the Auckland University staff club) for a well-lubricated event the other night.

Fearing the Kynge - unlucky for some - is Bernard's little book of 13 verses (there's actually 17) for Henry V111, illustrated by geothermal scientist Brian Lovelock, and a steal at $20.

Bernard's chums did his latest work proud with a rollicking gleeful turnout. 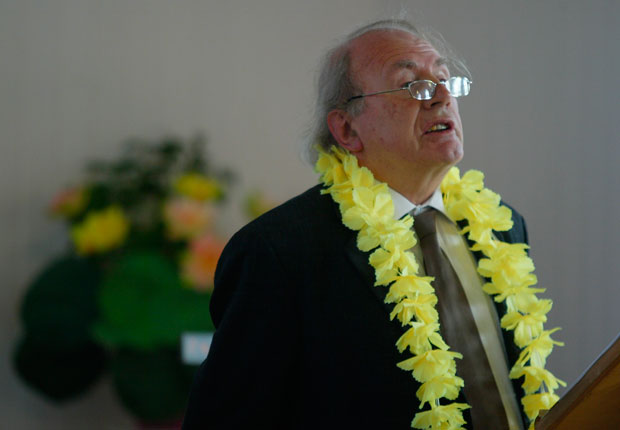 Actor Peter Bland read what Bernard (80) reckoned was the "obscenest one" - which he wrote on an English school bus in 1948 between Polstead and Little Throbbing... "just before I was expelled..."

It's set to the traditional Mr Whippy air Greensleeves, said to have been written by King Henry himself.

"I love thee Maistresse Bullen.
I love thy great white thighs
yet danged if I do e'er recall
The colour of thine eyes.
Thy hair is raven black
'tis said. I'd quite forgotten that
but cannot ban from my mind's eye
thy thighs so white and fat."

Bernard's own delivery to the adoring crowd was laced with wit.

How about this from Ann Boleyn's lover Thomas Wyatt, upon sending a back-handed gift to King Henry in 1536:

Bernard confesses a weakness for cuckolds.

"Cuckolds are to me what daffodils were to William Wordsworth," he confided.

"History suggests that the clock, like Wyatt, was not dispatched - though Ann Boleyn was."

In his closing words Bernard said what many would agree with.

"Like newspapers and quality journals there will always be a place for beautifully designed and produced artefacts called books."

"Books that people will want to sit down with and look at - page by crisp page: pages smelling like new buns or (like the Grey River Argus) like old crumpet and to pass them on to people they care about."

"My friends - I trust this little printed book will meet that test, even in 480 years time - making it has been fun."

News from a small town

The following correction appeared in

, the monthly organ of the Canterbury-Westland branch of the New Zealand law society:

"The song Miranda Rout sang to honour Justice Graham Panckhurst at the Law Dinner in August was I'd Rather Go Blind, not Cry Me A River, as reported in last month's Canterbury Tales. The error is regretted."

The earlier c*cked up report said Cry Me A River had been given word changes to personalise its message for the judge.

Miranda Rout (formerly Black) is a well-known Christchurch singing lawyer, whose throaty talents have tickled the fancy of district court judge Bob Murfitt - who recently confessed to being blown away by her smokey tones and gutsy rendition.

But that's a tale for another time...

2. Meredith Connell director of litigation Brian Dickey (47), who prosecuted his first High Court criminal case at 23 and has more than 20 years prosecuting experience under his belt, is new acting Crown solicitor for the Auckland region.

He replaces Christine Gordon QC, who filled the acting role when long-time Crown solicitor Simon Moore was made a High Court judge earlier this year.

Born in the Waikato, the sociable Mr Dickey was admitted in 1990, joined Meredith Connell in 1994 after a year in London and was made partner in 2000.

(A Crown law office review of how the Crown solicitor's warrant in Auckland - held by Meredith Connell since 1922 - will operate in future will divide prosecution work between Auckland and Manukau courts).

He graduated with LLB (Hons) from Auckland University and was admitted to the bar in 1981, later graduating LLM from Virginia University in 1984.

A former solicitor and partner with Holmden Horrock & Co he joined the partnership of Buddle Findlay in 1988, specializing in commercial and bank litigation.

He went to the independent bar in 1994 and was appointed Queen's Counsel in 2013.

Government pressed to assess whether the $3 billion Provincial Growth Fund was worth it.
ENTERTAINMENT