Whether you’re looking to buy or rent, OneRoof.co.nz has everything you need to find your dream home.
© Copyright 2020
NZME. Publishing Limited
test test test
Man punched partner and her mother
19 Jan, 2015 6:20pm 2 minutes to read

The commanding officer of the navy ship that was outlasted by three ageing fishing vessels in the Southern Ocean has responded to critics who labelled the operation a public relations disaster.

HMNZS Wellington docked in Dunedin yesterday to refuel after eight weeks patrolling the seas around Antarctica.

The last two weeks of the patrol were spent pursuing three vessels, the Songhua, Kunlun and Yongding, that were fishing illegally. The standoff ended when the navy was unable to board the foreign-flagged ships and began running low on fuel.

Opposition MPs described the operation as ineffective and demanded answers from the Government about how three apparently run-down fishing boats outlasted the navy's offshore patrol vessel.

"I'm very determined to counter those opinions," he told the Herald.

"Not only did we find three IUUs [illegal, unreported and unregulated vessels] operating in an area of Antarctica which is the size of Australia, we caught them in the act of fishing using the element of surprise and tenacious tactics to then exploit a whole heap of evidence which is now being analysed ... to bring these guys to justice."

Commander MacLean defended the decision to abandon attempts to board the ships, saying enough evidence of illegal activity had been collected and conditions had become too challenging.

Navigating in the icy Southern Ocean was at times "like having to dodge boulders on a motorway every 100 yards", he said.

Navy in standoff with fishing boats

Calls to up ante with fish pirates

"It becomes a four-dimensional exercise because overlaid on top of that you've got 50-knot winds that really make it a challenging environment to do business."

Commander MacLean said calls by some MPs to use force against the fishers was "ill informed". 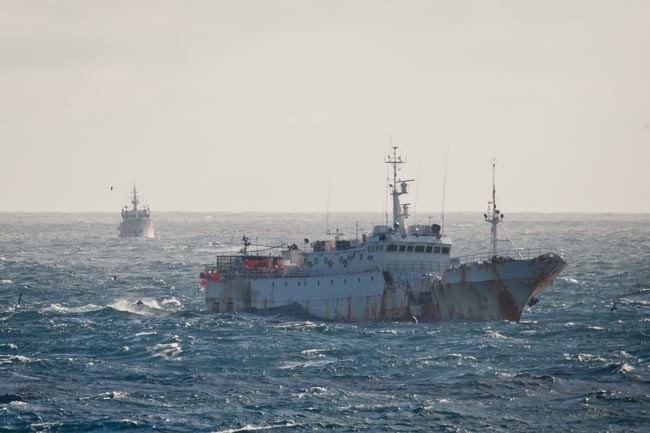 The Yongding and Kunlun vessels in the same area.

"It was a peace-time operation and we abide by a strict set of rules of engagement which are laid down by the Government. It certainly wasn't necessary for this mission."

Commander MacLean also gave more detail about how the poachers were caught. Once the fishing vessels were detected near the Ross Sea, the Wellington remained out of sight over the horizon and sent its smaller sea boats ahead. The boats hid behind icebergs and in the line of the sun to get closer to the fishing vessels undetected and take photographs and video footage of their illegal activities.

A working group led by the Ministry of Foreign Affairs and Trade is now analysing the evidence gathered to see whether legal action can be taken.

Photographs released by the Defence Force showed fishermen hauling in toothfish using gillnets, which are banned in the region.

Murder trial: My uncle was 'screaming for his life'

The piece is not going to be everyone's cup of tea, the artist said.