As David Keys lay cold, paralysed and face down with a broken neck in a dark sinkhole in Waihi, his 12-month-old dog Bailey sat loyally by his side.

For seven long hours, she barked constantly - her distress eventually alerting a council worker to the plight of the injured 52-year-old, who had been drifting in and out of consciousness, with rapidly deteriorating vital signs.

Mr Keys now faces life as a quadriplegic, after an ordeal which began on Wednesday night as he was cycling to the Waihi rugby ground, with Bailey running alongside him.

As he rode from a path to the field, he hit the 75cm-deep sinkhole, breaking his neck as he fell face down.

Unable to move, use his arms to grab his cellphone from his pocket or even yell, he was forced to lie there throughout the night. "There was a bare open hole ... I guess in the dim light he didn't even see it," his brother Ian Keys said last night. "He just rode into it. It was out of the blue. The next second, he was going over the handle bars. He landed and heard his neck break."

The hole was only about 50m from netball courts where training sessions were under way.

"There were people there, but he couldn't breathe and he couldn't call out for help. When he did, it was barely audible," Ian Keys said his brother told him from his bed in Middlemore Hospital, Otahuhu.

"He was lying there and he watched the lights at the netball courts go out and everyone go home.

Sinkhole accident: Mining not to blame

Bailey stayed with her owner, barking to try to attract attention.

"About 4.15am, the council worker came to do the rubbish and spotted Bailey sitting there ... The dog is what gave him away," Ian Keys said.

His brother had a very low body temperature when emergency services got to him. He had been drifting in and out of consciousness all night. He was rushed to Paeroa by ambulance and then airlifted to Auckland City Hospital. His vital statistics were "crashing" and he was close to death, Ian Keys said.

He was later transferred to Middlemore, and underwent a three-hour operation to stabilise his neck so doctors could remove the brace.

"He's a hardy character," Ian Keys said. "He has been a hunter, a bushman, his whole life. But his temperature was pretty low ... That would have been the death of him."

Ian Keys was there when his brother was told he would be quadriplegic for the rest of his life. 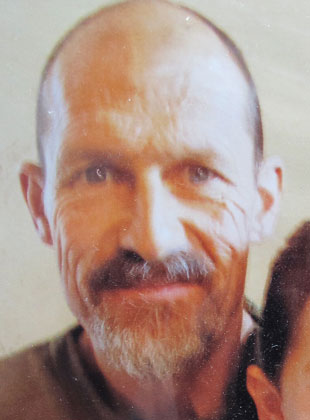 "At the moment, he says it's a blessing that he's still alive. I guess in a few weeks or so when his predicament really sinks in he might not think it's so much of a blessing."

Ian Keys said that while the park was generally well maintained, the sinkhole had been there for some time. "It seems like a good three weeks ... and I feel that's an adequate time to put some cones on it."

He said the path had lighting but the sinkhole - which was in the middle of the path - was in shadow. "It's such a hazard and should have been identified as such."

The Hauraki District Council has now cordoned off the sinkhole. Chief executive Langley Cavers said the council hadn't been aware of it. The only maintenance carried out at the park was mowing, which occurred every two or three weeks, he said.

"It's just a tragic accident and obviously we feel for the family. It's a terrible time."

David Keys' daughter, Diana Healy, and 3-year-old grandson, Lucus, were both at his bedside last night.

His sister Fiona, who visited him from Katikati, said Bailey was devoted to her master. Ms Keys is now caring for the hunting dog in his absence.

"She is used to coming here because David often comes to stay here. He has been very helpful to me and stays a week or two out of every month."

Ms Keys said her brother could only blink and talk at present.

She said the accident would now change their lives.

"Hunting is his thing. I face the Kaimais and he walks the Kaimais every weekend for fun - that's his playground. How could he now be trapped in that body, forever? The prospect is just wicked. Once he comes out of shock, he's just going to be appalled at his situation."

• Sinkholes, known in New Zealand as tomos, can appear when ancient lava tubes were uncovered, when cave roofs collapsed, when water eroded buried sediment deposits, and possibly where old rubbish dumps were sealed over.

• Sinkholes could not usually be predicted but in Florida, authorities used ground-penetrating radar and electrical imaging to guess where sinkholes were likely to form.

• Famous sinkholes include the Great Blue Hole, a submarine sinkhole off coastal Belize. It is a popular tourist attraction and diving spot.

Tonight's win makes it the fifth time Powerball has been struck in September alone.
NEW ZEALAND

New poll: Kiwis back euthanasia, support for legalising cannabis going up in smoke

It's a far cry from poll results in March, when more Kiwis were in favour of the bill.
NEW ZEALAND

Advance NZ: 'We should be at all of these televised debates'

Advance NZ believes it has a 'good prospect' of winning the Te Tai Tokerau electorate.