Jay Scott, a proud wahine who wears a moko kāuae (a form of facial tattoo), kept her cool when she was asked to leave a playground. Photo / Paul Taylor 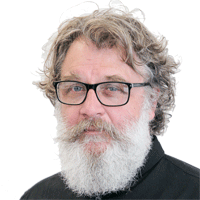 It's frustrating and often indicative of racism.

Jay Scott, a proud wahine who wears a moko kāuae (a form of facial tattoo), did well to not respond to racist queries from a couple of fellow mothers in a Havelock North park.

Scott was there with her children, when, she says, she was asked where she was from by the women.

The tone of the korero wasn't leading to an invitation for Scott to pop around for a cup of tea.

The women's line of questioning reeked of racism, what they meant was "You're brown and you shouldn't be here''.

And their request that Scott cover her face because she was apparently frightening children also reeked of ignorance in the truest sense of the word.

Let's say a child was scared - a moko kāuae is nothing to be afraid of.

What is scary is that the mothers of the apparently frightened children weren't able to communicate this with their children.

They saw a brown woman with a facial tattoo, and verbally reinforced a negative stereotype. That's racism.

And, worryingly, it's racism evolved directly from the colonialism that hangs over New Zealand like a bad smell, each time someone tried to evoke 'Why can't we all be one' and 'My best friend's a Maori, but ....'' sentiments.

"I'm not surprised at all. I think the message that needs to be put out in the public is 'Don't fear the moko, don't fear Maori, and don't fear what we have to offer'."

Through a moko kāuae, Māori women proudly represent their hapū, iwi, whakapapa and mana. The decision to embark on the journey that results in a moko kāuae is not a light one.

You don't walk into a tattoo parlour and ask for one - any self respecting tattoo artist (and there are plenty) would refuse.

Scott made the same observation as Skipworth - if you wear moko kāuae, looks and stares are common.

Scott displayed mana in the way she ignored the Havelock North mums' racism.

It is a little sad that this happened in a playground, because it's not just children who forge friendships in local parks. Parents do too.

Ask someone, if the opportunity arises, about their moko kāuae. If you are polite and respectful, the wearer will likely be happy to share with you.

Your country will be the better for it.

Spy's rising stars: Meet the young wāhine and tane who are shining

Deputy PM reacts to US abortion ruling, reveals he was targeted by homophobic threat at meeting