Kris, we don't need to do a Don Draper pitch to the readers because there is no need to sell

. It's up there with the greatest television shows of our generation. So let's get straight into it and break down the best scene. I couldn't just pick one so I've gone with my top three.

Pete Campbell and Lane Pryce having a punch-up during a partners meeting which was preceded by the line, "Because he was caught with chewing gum on his pubis".

And, in contrast, a scene as simple as it was hilarious (RIP Dot Campbell):

Cam: Speaking of Bob Benson - he's the greatest minor character on the show who we lost too soon, with a five-way tie for second between Sal, Kinsey, Abe, the second Bobby Draper and of course Ms Blankenship. Bob Benson always brought something to a scene, and that doesn't include a spare cup of coffee. The stunt he pulled on Pete to start the Chevy in the main lobby in Detroit should be taught in all business schools. 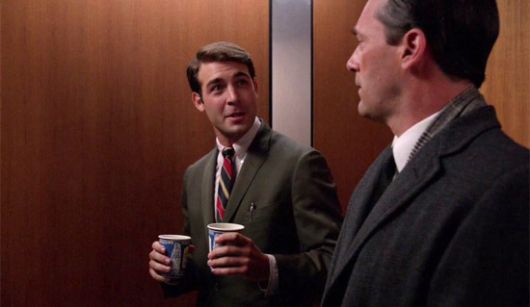 Also when it comes to recurring minor characters I was always happy when Alison Brie's name appeared in the opening credits because once she joined Community you never knew how much time she had to shoot Mad Men episodes. She just nailed the '60s housewife plus it meant more Pete Campbell which is always a good thing. It was pleasing to see a whole plotline dedicated to them in the penultimate episode.

Kris: Pete Campbell became my favourite character as the series progressed, which was rather unexpected considering he was ostensibly the villain in season one. From falling down the stairs to carrying skis, Pete had a knack for making the most mundane task gif-worthy.

Despite his bumbling around the office, Pete was very good at his job. The ultimate accounts man, Pete's abundant abilities as a schmoozer were evident in how quickly he fitted in at McCann-Erickson while his former SC&P colleagues floundered.

Vincent Kartheiser's performance, artificially-receding hairline and impeccable delivery means Pete is my pick for a spin-off - not that Matthew Weiner will ever stoop to such levels - but even I struggle to call Pete the Mad Men MVP, not on a show graced by Peggy, Roger and Creepy Glen.

Cam: My pick for the spin-off is Scout's Honour. Creepy Glen (played by Marten Weiner) is the worst character and up with the worst pieces of nepotism since Darren Ferguson played 27 matches for Manchester United. How can we have almost half an episode in this final season dedicated to a character played by the creator's son but we've seen Don Draper's eldest son very briefly?

I can't pick an MVP between Peggy, Don, Roger and Pete. Not just yet. So let's move onto best pitch. It's hard to go past Kodak. I think after that episode aired the share price of Kodak jumped 32 per cent, despite the fact no one buys film anymore.

Kris: Don's carousel speech was the series' early high point and it was nicely bookended, I think, by the Burger Chef pitch Peggy gave the day after the moon landing. It was the moment Don truly passed the torch to his protege and saw Peggy brilliantly mix subject matter and timing - 'I have to talk to people who just touched the face of God about hamburgers!'

That pair's relationship was always at the core of the show, producing the consensus pick for the finest episode. But since silly concepts like 'consensus' are no fun, what was your favourite hour not named The Suitcase? I'm opting for season five's Far Away Places, featuring three vignettes occurring simultaneously: Peggy's rough day, Don taking Megan for orange sherbert, and the immortal combination of Roger Sterling and LSD...

Cam: For me the best episode is between Shut the Door. Have a Seat and For Immediate Release. Two similar episodes where Don and the crew pull a fast one and move the company. The season three finale had the juxtaposition of Don successfully shifting the agency away from the Brits (always fun to see the English lose) to start a new chapter but at the same time his marriage officially ending. Even though For Immediate Release was pretty much the same storyline, it happened midway through season five and was unexpected. The scene with Don firing Jaguar was superb and the episode also brought Peggy back to the main office and led to more Peggy-Don and Peggy-Stan scenes which is always a good thing. But Shut the Door. Have a Seat is my favourite.

Honourable mention to the The Chrysanthemum and the Sword. The episode in which Draper and Teddy Chaough were battling it out for the Honda account and Peggy got to test drive the product.

The great thing about Mad Men is obviously that it's a period piece and the way Matthew Weiner handled historic events - either by building an episode around them or just a wink or nod. The JFK assassination and Lee Harvey Oswald shooting, the moon landing, Martin Luther King assassination, the Beatles, '66 World Cup, Vietnam and the 1969 Mets all feature. I also will miss episode descriptions ending with 'Don takes Bobby to Planet of the Apes'. Anything you felt was overdone or not covered off well in terms of historic events?

Also, another historical detail ignored until the penultimate episode: all of these people dying from their more-is-more approach to drinking and smoking. Bert was old and Lane was a Mets fan, meaning no main character shuffled off the mortal coil due to their horrendous health. Poor Betty. At least in death she'll be more likable.

Although, I never fully subscribed to all the ill feeling towards Betty. Don was a pretty shitty husband, she was forced to contend with that awful fat suit, and her first son kept shape-shifting between seasons. Plus, Betty gave us this:

But she was, of course, some distance behind Stan and Joan and Sally, among others. You ready to play favourites yet?

Cam: It has to be Roger. Don may have enjoyed the swinging part of the 60s but he has never moved past 1959. The only '60s' thing he did was attend the Beatles at Shea Stadium and that was only to impress Sally. Meanwhile Roger embraced the decade. From LSD, to sharing beds with hippies and their boyfriends to that awesome moustache and sideburns, he's also kept up with the fashion. I know he's an accounts man but Roger epitomises the '60s ad man. Heavy drinker and smoker, sleeps with countless women and always has a roll of cash in his pocket.

But it was the one-liners that always did it for me with Roger which were even better delivered in the New York Athletic Club Sauna room.

But despite that he didn't have the best line of the series. That goes to a young arrogant Don with this gem from Smoke Gets in Your Eyes - the first ever episode: "What you call love was invented by guys like me to sell nylons." Brilliant.

And this monologue is up there. But of course a final one-liner from Roger wins the scene.

What's your best line? And it can't be Zou Bisou Bisou.

Kris: I'm tempted to head back to the bottomless well that is Pete Campbell to select a favourite line - still dropping all-timers like, "The king ordered it!" late in the last season - but I will turn to poetry rather than comedy and opt for Bert's memorable eulogy of Ida Blankenship, Queen of Perversions:

Just beautiful writing - something that always set Mad Men apart. But! That hardly means we can't try to one-up Weiner and Co. Here's my prediction for the finale:

Don heads back to New York, with little more than a couple of dollars and a glint of inspiration in his eye. He talks his way into McCann-Erickson and calls in a few favours to set up a meeting with Coca-Cola. Taking his accustomed position at the head of the boardroom, with a Coke in his hand, Don smiles, twists the lid and says simply: "Coca-Cola. Open Happiness." He's laughed out of the room. Picking up Sally and Bobby (forgetting, like everyone else, about Gene), Don leaves the advertising game for good. Or so he thinks.

We next see Don sitting in an armchair with a cigarette in one hand and a Scotch in the other. A few wrinkles have appeared at the corners of his eyes and flecks of grey dot his hair. He's still devastatingly handsome. A title card reads: 1999.

The door opens and Bobby bursts through, now played by John C Reilly. A struggling ad man, Bobby still lives with his pops, unable to capture the emotional resonance of a classic Don Draper pitch. But Bobby is beaming, waving a DVD above his head, telling Don he finally did it, finally came up with a campaign to make his dad proud. He puts the disc in the machine and presses play.

The final image of the series is familiar. Don, shot from behind, arm dangling over the side of the chair. The cigarette falls from his lifeless fingers just as we hear the first few chords of Bob Dylan's The Times They Are A-Changin'. The screen cuts to black.

Cam: Okay, I can't top that. I like the idea of Weiner ending with a song by a big name, just to spend some big AMC cash one last time.

I've got a feeling the last scene will be Don introducing himself to someone as Dick Whitman - ending the chapter of his life as one Don Draper.

Also I don't think Don walks into another agency again. So working backwards, there was a hint in a previous trip to Los Angeles when he did a runner on Pete and felt at ease having a good old chinwag to another man about fixing cars. He's obviously a handyman, can fix Coke machines or a leaky tap owned by Pete Campbell at ease (with the exception of slider doors in modern highrise apartments that is).

I think he takes back the Dick Whitman name, opens his own car shop called Whitman and Sons in Pennsylvania, just down the road from the old whore house he grew up in. Maybe even moves to London in the '80s after feeling guilty over Lane Pryce's death.

Despite being an average mechanic, he has a rule to never work on Jaguars and often skips out during the day to see a movie, the ads for his shop are awesome and keep a steady flow of customers.

It finishes with either Al Green's Tired Of Being Alone or George Harrison's All Things Must Pass.

* The Mad Men finale screens on Soho on Tuesday at 7.30pm.

Crusaders too good for fast-starting Hurricanes

The Crusaders have kicked their pre-season off with a win in Ashburton.
BUSINESS

The council will negotiate with creditors to get the debt passed onto them instead.
ENTERTAINMENT