Whether you’re looking to buy or rent, OneRoof.co.nz has everything you need to find your dream home.
© Copyright 2020
NZME. Publishing Limited
test test test
Hobbit: World premiere to be in London
31 Oct, 2014 4:00am Quick Read

Feathers were flying this week over a small pocket of Coatesville, and the fowl mood may linger as the country's most high-profile estranged couple exchange a war of texts over their pets.

Neighbourly relations between Kim and Mona Dotcom, who live next door to each other in the wealthy semi-rural community, took a turn for the worse when her rescue dog mauled two of Kim's pet chickens.

And it's not a poultry, er, paltry matter.

Said Mona: "It was a tragic event and I feel terrible, but my dog went into Kim's property and killed two of his chickens.

"She brought them home to my place, like a trophy. One was still alive - just - so I took it back to the mansion because I thought that would be the best thing to do. It was so sad. I felt terrible.

"Kim was really good about it, but he sent me a text later saying I should do something about Rocco. It wasn't Rocco, it was Dottie [the 12-month-old blue heeler cross].

"But I didn't want to put her down. I called a dog trainer immediately. Dottie is in heat and she's such a lovely, good-natured dog.

"I got both Dottie and Rocco [a Staffordshire bull terrier pup] from the SPCA for the children after Kim and I broke up. I felt they would be good companions for the children. They are members of our family, the kids adore them."

The Dotcoms split this year. Mona moved out of the Coatesville compound she shared with her husband and the five children and into a neighbouring four-bedroom townhouse. The pair share custody.

Kim Dotcom could not be reached for comment. It's unclear if he will add more backyard chooks to his coop.

Top photographer lends a hand for children in need

He's helped raise hundreds of thousands of dollars for charitable causes in the United States, New Zealand and his native Greece, and now internationally acclaimed photographer Spiros Poros has turned his attention to a Hamilton charity for kids in need. Spiros Poros with his daughters Lito, Dione and Danae.

Poros, who split this year from his former model wife, Kylie Bax, with whom he has three young daughters, has donated a fine art photographic work to the McKenzie Centre Trust for special needs children for its 30th anniversary gala tomorrow night.

Arts patron Sir James Wallace is an avid fan of Poros' work. So, too, are actors Harvey Keitel and Keira Knightley and superstar Jennifer Lopez, whom Poros photographed at the sacred rocks of the Acropolis in Greece six years ago.

Poros, who is an ambassador for Greek women's refuge WIN Helias, has donated several works to various New Zealand charities over the years, including the Breast Cancer Foundation.

"I've had a wonderful photography career working with some of the biggest names in the world, but it's great to be able to give back and support causes that are close to my heart," Poros told The Diary. "Working with athletes from the Special Olympics was particularly poignant. But as a devoted dad, it's nice to be able to help children in need."

Bax and Poros, who wed in Greece, split in June after nine years of marriage. Poros lives in Auckland, Bax in Matamata.

Paul Henry appeared to promote his new breakfast show at TV3's new-season launch last night, but the company went into lockdown earlier in the day, refusing to share information under embargo, including with this column on an early deadline.

The fear, apparently, was that it might tip off arch-rival Mike Hosking and the radio arm of NZME., parent company of the Herald, before the launch and info might be leaked in the public domain. A MediaWorks rep said "it's not a trust issue", but rather a concern about competitive advantage.

Congrats to music engineer extraordinaire Joel Little, who has wed his longtime partner, Gemma Robinson. That's them pictured at right when they got engaged. Little's collaborator, pop star Lorde, sent a shout-out on Twitter yesterday: "Almost forgot to congratulate Joel Little who finally got married to his partner/baby mama Gemma (she's way cooler than him) CNGRTZ GUYS."

2. Kiwi racing driver Matt Halliday and his American wife, Jessica Meisels, made a baby. They've named him Alexander Dylan. The tiny tot is already a regular at trendy Malibu eatery Nobu. Will he race cars like his old man when he grows up?

3. What prompted Seeby Woodhouse to celebrate his stag do at the Playboy Mansion?

4. Which TV star got loved up on a cuddle-class flight to San Francisco?

5. The ABs had a day off in Chicago yesterday, so what did they get up to? The Franks brothers (Ben and Owen) got weightlifting tips from the Chicago Bears strength coach Clyde Emrich, while Ryan Crotty and Aaron Smith got kitted up for a hockey game.

6. Konrad 'Koni' Hurrell went to hospital this week to have surgery for a wrist fracture and posed in a fetching johnny gown and surgical cap. Surely a cameo patient role on Shorty St beckons, no?

7. Air NZ put out an epic safety video featuring elves, hobbits and Peter Jackson. But is it time for New Zealand to end its infatuation with Middle-earth?

8. Need a plus-one Halloween costume? Two Lorde fans dressed up as the singer and her boyfriend, James Lowe, for Halloween.

9. MKR winners Neena Truscott and Belinda MacDonald toasted their victory at Sweat Shop Brew Bar on Wednesday afternoon BEFORE the big announcement was officially made on the telly that night. And who was the high-profile mumpreneur they asked to have a piccie with?

10. Did David Seymour and Jami-Lee Ross take the sartorial twin set too far in the House? 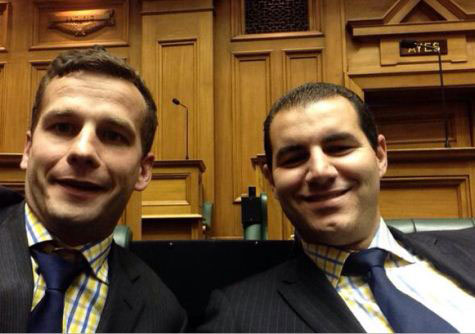 12. How does John Key feel about being snubbed by Her Maj? The Queen's official Twitter account follows the PMs of Britain, Canada and France. Not the Keyster, alas.