Rivers Cuomo and co have been talking the talk ahead of the release of their ninth studio album, promising a return to the guitar crunch of their first, and best, album, the Blue one.

If you enjoy the heavier end of Weezer's spectrum, Everything has plenty to please you: the hash pipe-style rawk of Back to the Shack, the rowdy hooks and fast-paced gallop of Lonely Girl, the air guitar riffage of Foolish Father and the opening beers-in-the-air party starter Ain't Got Nobody.

But Weezer struggle to keep that pace up for a full album, with the dodgy pop-rock of I've Had It Up to Here sounding like a Fall Out Boy ripoff, and The British Are Coming and Da Vinci delivering nothing more than mid-album filler.

It doesn't help that Cuomo is still mining the same lyrical themes of 20 years ago: isolation and abandonment ("ain't got no one to really love me") and problems with the opposite sex ("cold hearted girl / don't hurt me like this anymore") despite the fact he's a happily married father-of-two. Even with its complete ignorance of current musical trends, and tongue-in-cheek predictions of rock's downfall on Eulogy for a Rock Band, Weezer never quite come through with the edge needed here to make this a fully fledged return to form.

One thing's for sure: 20 years from now Weezer fans won't be demanding an Everything full album tour. 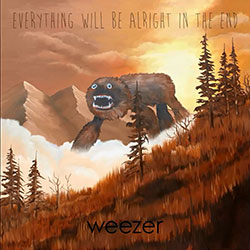 The scenario is likely to present some tough questions for the Warriors players.
BUSINESS

Tune in now to have a drink with Kiwi celebs including All Black Beauden Barrett.