Whether you’re looking to buy or rent, OneRoof.co.nz has everything you need to find your dream home.
© Copyright 2020
NZME. Publishing Limited
Farewell to Air NZ's 747- Queen of the Skies
27 Aug, 2014 4:00am Quick Read

The figures aren't adding up for Boeing's "Queen of the Skies". Go to any airport in the world and count the engines on planes. With the exception of the A340, and the even larger but importantly new and efficient Airbus A380, the trend is just two engines for widebody aircraft.

Boeing's long-haul workhorse the 777, the Dreamliner, the Airbus A330 and soon-to-be-launched A350 have two engines, cutting maintenance, and with advances in engine technology and lightweight airframe construction are far more fuel-efficient.

In its heyday, the Boeing 747 was hailed for its fuel efficiency but comparatively now is a gas guzzler, consuming fuel at the rate of 10 tonnes an hour.

And while Boeing is trying, with some success, to keep a good thing going with an advanced and even bigger 747 for cargo, the economics aren't working for the older aircraft. They're being sold on to second or third-tier carriers, converted into freighters, sold for parts or parked up in desert "boneyards" in the southwestern United States. In these dry environments they don't corrode and are further stripped for parts or sit idle.

There have been more than 1500 jumbos built and they've been an enormous commercial success but the 747 was one of Boeing's biggest gambles.

Spurred by losing a contract for the US military's next giant transport aircraft, Boeing turned to its civil division to revive its fortunes. Encouraged by a growing appetite for long-haul travel and sealed with a commitment by Pan Am to buy 25 planes, Boeing executives bet their future on what was to become the most recognised plane in the world.

They committed more than the value of the company to developing the 747 and a factory big enough to build it in. Work on clearing wooded hill country at Everett, north of Seattle, began in 1966 and just two years later the first prototype was wheeled out of what was the biggest building in the world. Engineers working on the jumbo wore hard hats for protection as the factory was built around them.

Boeing said the tens of thousands of construction workers, mechanics, engineers, secretaries and administrators who made aviation history were known as The Incredibles.

Pan Am made the first commercial flight between New York and London in January 1970 and began a revolution in air travel. The plane could fly more people further and at a lower seat cost which translated to lower fares and a boom in long-haul travel.

A350 v Dreamliner: How they stack up

In the early days, when fuel was cheap and international flying still had plenty of glamour, airlines piled on the extras. The spiral staircase leading to the upper deck took them to lounges with grand pianos, bars and dining rooms.

P. J. Scherer, the Herald's man aboard Air New Zealand's 1981 jumbo delivery flight, noted one Southeast Asian carrier considered fitting out a massage parlour upstairs but ditched the idea "when some such establishments began to acquire an insalubrious reputation".

On the distinctive hump, at the time there was attention on high flight-crew pay with "wiseacres insisting the bulge was designed so that pilots could sit on their wallets".

Besides flying an estimated 3.5 billion passengers around the globe, one of the most famous uses for the plane is transporting the US President around as Air Force One. The US military has fitted out another 747 as the "doomsday plane" bristling with classified defensive systems including a skin able to withstand radiation from a nuclear blast.

Others have been built specifically for freight with a hinged nose, and in 1977 a specially equipped 747 carried the US space shuttle for the first time.

Air New Zealand staff were tearful when the airline's first Boeing 747 touched down at Auckland.

Long-time airline executive Norm Thompson said there were strong emotions on May 29, 1981.

For the airline it was a watershed moment following the Erebus disaster two years earlier. Jumbo jets put the airline's operations into the major league and would help repair its damaged psyche.

"We had tears in our eyes with the arrival of that aircraft. It was like being reborn," said Thompson before he retired. "We were getting big in the game with these monster aircraft. It was a significant lift to the airline."

Guests on the delivery flight from Seattle applauded the aircrew on touchdown and cabin staff called out "you beauty" and "you little ripper", the Herald reported.

Air New Zealand's initial fleet of five 747-200s were forecast to save the airline $30 million a year in fuel, compared to the DC10s they replaced.

But 33 years after the arrival of Air New Zealand's first jumbo, the last of 13 operated by the airline is about to make its final flight.

It will fly to San Francisco on September 10, returning to Auckland two days later.

He said the final flight would mark a sad day for jumbo fans but was inevitable as Air New Zealand looks to the future. 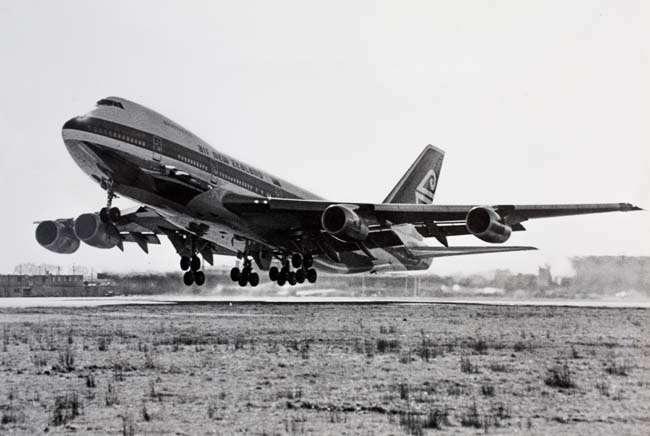 On cue, the airline's newest widebody, a fuel-sipping carbon fibre-construction Boeing 787, taxies out on to the runway and slips away on another flight across the Tasman.

"As unhappy or as sad as a lot of us will be to see the aircraft go we've got to focus on the future and the rationalisation of the fleets down to 787s, 777s and A320 will help the business."

Woodward's been flying the jumbo on and off for the past nine years and will be in the cockpit for the last flight.

"It's been the backbone of the fleet and deserved to earn its name Queen of the Skies. It's still a very pretty aircraft and certainly one of the most distinctive."

He said the big plane had "no vices", was a tough plane and even the loss of an engine was not necessarily considered an emergency. "It's a big aircraft with lots of sub-systems, a lot of redundancy, a lot of backup, so there are multiple systems to monitor and manage."

The cockpit is almost 10m above the tarmac and that took some getting used to, said Woodward.

"The Erebus disaster had brought Air New Zealand right to the edge. They ordered the 747s and they got them very quickly [and] they were great, made the airline a lot of money and rebuilt the reputation," he said.

"I suppose it's time for them to go - they've lasted a very long time and they were a great ship."

Life of a legend

Pan Am announces US$525 million order for 25 Boeing 747s, effectively starting the programme

1985
520 people die after a Japan Air Lines 747 has catastrophic mechanical failure and hits a mountain. It is the worst single aircraft accident death toll

Next trending article: A350 vs 787 Dreamliner: How they stack up

Investors are banking on better times returning. But the big question is when.
BUSINESS

TikTok and the politicisation of American business

Financial Times: Tik Tok will be banned in the US due to its ability to collect data.
BUSINESS

'There's no one else, there's just me': Man behind $400m fund awaits SFO probe

How Penrich went from being a niche darling of financial world to a nine-figure fraud.