Whether you’re looking to buy or rent, OneRoof.co.nz has everything you need to find your dream home.
© Copyright 2020
NZME. Publishing Limited
What to expect from the next generation of Windows
11 Jul, 2014 5:24pm 5 minutes to read

Four years later than originally hoped, the plane landed around its scheduled arrival time at 4.22pm.

Around 45 Air New Zealand staff greeted the plane at the airline's engineering base.

Engineer Stu Rentoul said "it's great to have it finally have it here."

"It's a lot different. It's a flying computer."

Flight NZ6789 was to have circled the city but had to abandon the plan because of bad weather and to keep close to schedule.

The 787 Dreamliner will be the first of 10 delivered to the airline and will replace aircraft that are no longer as fuel efficient. In its present configuration the plane will seat 302 passengers and be used initially to fly to Australia. While the airline has fixed an October date for flights from Auckland to Perth, it may put on earlier services to Sydney.

Three planes are due for delivery before the end of the year and they will also be used to fly to Shanghai and Tokyo.

A 50-strong group of airline executives, Boeing staff, VIPs and journalists from around the world made the 14-hour delivery flight which took off from Paine Field at Boeing's Everett factory north of Seattle.

Demand for pilots takes off

2 minutes to read
This is what Air New Zealand had to say about its Boeing 787 Dreamliner before it made its debut.

The airline first ordered the Dreamliner a decade ago. Its initial order was for the earlier model 787-8 but when it changed to the next model 9-series - which is 6m longer and has new features - it hoped to have it by 2010.

However, production delays caused largely by outsourcing to suppliers around the world, design problems and labour disputes pushed the whole programme back. It struck problems again soon after coming into service when overheating batteries forced the global fleet to be grounded for three months. The lithium ion battery system has undergone extensive modifications.

The plane uses technology designed for the military by Boeing, most notably extensive use of carbon fibre in the fuselage and parts of the wings.

This makes it lighter, providing improved fuel economy of 20 per cent on the 767 aircraft it is replacing.

New technology on the tail, first used in the military, allows air to flow more easily and reduce drag. 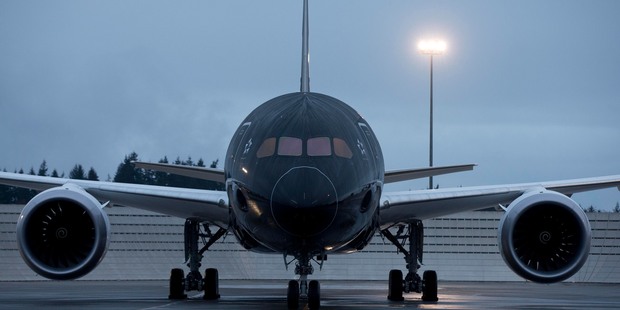 It also has new cabin features - bigger windows, more optimal pressure and levels of humidity and revolutionary lighting - which is aimed at making long-haul journeys more comfortable. Fuel savings and cabin comfort are particularly important to airlines such as Air New Zealand which flies many ultra-long haul routes where fuel can make up nearly half the cost.

While the plane will be more economical to run, the airline has said it will keep "downward pressure" on fares rather than necessarily leading to reductions in ticket prices.

Boeing commercial airlines senior vice president of global sales and marketing John Wojick said this week the delivery was a tribute to the hard work and dedication of Boeing staff, suppliers and Air New Zealand.

"Air New Zealand was a perfect partner for us in developing the 787-9, given its innovative spirit, unique mission requirements and geography."

Air New Zealand was the second airline to order the Dreamliner at a time when Boeing was struggling to sell planes and was able to negotiate big discounts.

While it won't reveal what it paid, it will be substantially less than the US$249 million list price of a Boeing 787-9.

Air New Zealand is considering its next fleet move to replace its 777 aircraft with the Boeing 777X and Airbus A350 in the mix.

Before taking off for New Zealand chief financial officer Rob McDonald told journalists there "this will be a big contest" between the Boeing 777X - which is under development - and the Airbus A350 - now flying - although they would be many years away.

A second order for the Boeing 787-9, with Air New Zealand holding options to buy eight more of the Dreamliners was an option.

Twenty-six customers from around the world have ordered 409 787-9s, accounting for 40 percent of all 787 orders.

Financial Times: Putin has made it clear he still has many options to retain power.
BUSINESS

Wayne Scott: Getting the fundamentals right with infrastructure spending

Looming announcements on infrastructure spending need to be part of a coherent strategy.