Threats, intimidation and abuse: the dark side of the Yes campaign has been exposed as Scotland decides today on whether to go it alone or stay part of the United Kingdom.

Business leaders and campaigners are being intimidated because of their pro-Union views.

Dozens of Scottish businesses have been subjected to bullying, threats and abuse after publicly questioning independence.

Several company directors said that they had received messages threatening to attack their families or boycott their business.

"My wife was upset by what people were saying on the internet [after they came out in support of the Union]," said Alistair Macmillan, a signatory to a pro-Union letter and managing director at White House Productions Ltd.

"They were threatening to boycott the business, attack me, attack us".

"No" campaigners have also faced abuse while they have been canvassing.

A partially sighted pensioner, who asked not to be named, said he was punched in the face by a Yes supporter as he handed out leaflets for Better Together in Glasgow.

"I was standing at a No station when two young men, aged in their 20s came up to me," said the 75-year-old man.

"I was talking to one of them normally, but then absolutely out of the blue the other just swung a punch at my head.

"I was a bit shocked and fell slightly backwards. I carry a white stick because I am half blind - they would have seen that."

Another Better Together campaigner who spoke to the Telegraph said that pro-independence campaigners had surrounded him in a Glasgow suburb and asked questions such as "where do you live?" and "are you Scottish?"

At the end of August, 133 company executives signed a letter backing the Union. Among the signatures was Keith Cochrane, Weir Group chief executive, Audrey Baxter, executive chairman of Baxters Food Group and Boyd Tunnock CBE and Ian Curle, the chief executive of Eddington, which owns the whisky brands The Macallan and The Famous Grouse. 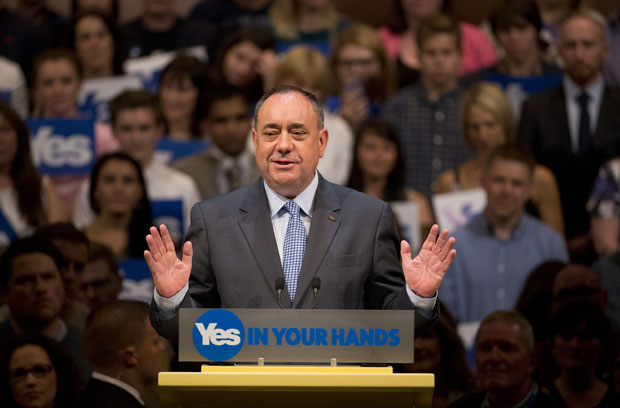 The letter was seen as one of the most significant interventions by the business community in the referendum campaign, with industries as diverse as publishing, banking, hairdressing, engineering and art dealing represented among the signatories.

"As job creators, we have looked carefully at the arguments made by both sides of the debate. Our conclusion is that the business case for independence has not been made," the letter read.

The Telegraph contacted all the signatories to find out how they felt their stance on independence had affected their business or position in the community.

Out of the 47 people who responded, just over half (51 percent) said that they had felt intimidated or pressurised by SNP or the Yes campaign as a result of their views.

Drew McKenzie Smith, managing director at The Lindores Distillery Company, said that supporters of independence had threatened to boycott his products as a "direct consequence" of him signing the letter.

Another two signatories, who did not wish to give their names, said they received sinister phone calls following the publication of the letter.

Other respondents said that they have felt generally intimidated because of their concerns about independence.

Another businessman who signed the letter told how a senior director at his company received "very vicious emails" while another said he had been called a "f***ing English b*****d" and told to "get back to England".

Jim McFarlane, who owns Endura, one of the largest manufacturersof cycle clothing in the UK, said that as well as receiving "online abuse"after coming out in support of the Union, he had a received a telephone call from someone who said they were from the Scottish government. The Daily Telegraph quotes Robert Burns for its front page The Union flag dominates the front page of The Times

"After the media coverage about my position, someone who said they were from the Scottish government called me at 8.20 in the morning", said Mr McFarlane.

"I was at home feeding my children, so my partner told them to call me at work. I'm ex-directory, so I am pretty sure it was not a joke".

Some people that responded to the Telegraph's questions told of the reluctance of their colleagues to speak out against independence due to their concern that it will jeopardise their interests.

Mr Lithgow, chairman at Lithgows Ltd, a family-owned shipbuilding company, said he approached several Scottish business colleagues asking them to sign the letter, but most were concerned about the consequences.

"They all expressed their full support for the sentiment of the letter...but declined to sign publicly as their business was wholly or in part reliant on the patronage or support of the Scottish Government or local government customers", he said.

"There is a very real fear of retribution against those that speak up in favour of the United Kingdom, driven by both the now politicised public officials and their SNP masters."

Another signatory who responded to the Telegraph's questions, who did not wish to give his name, said: "I know of suppliers to the Scottish government who have expressed publicly their support for the union, to be told they won't receive future work if they continue in this way."

Almost a third (30 per cent) of respondents said they were deeply concerned about "No" posters being defaced on their property or on other properties nearby.

Mr McKenzie Smith said: "I have seen plenty of evidence of 'No' signs being torn down, cars scratched to the point that a local potential Tory MSP will not put a 'No' sticker on his car as he fully expects it to then be scratched."

John Michie, managing director at Charles Michie Pharmacy, said that after he put up 'No' signs in his shop window in central Aberdeen, the glass had been spat at.

"The spits have run down the glass and look very unsightly. It is reprehensible. But I wasn't in the least bit surprised," he said.

Charles Ritchie, who runs Score Group in Aberdeenshire, said that men in balaclavas had recently entered his premises to destroy "No" posters.

"We have recently put up signs on our property supporting the no campaign", said Mr Ritchie.

"Since last Friday they have been trashed by for example three people wearing balaclavas and carrying sledge hammers in the wee hours of the morning".

The police are now investigating.

Stephanie Fraser, the head of a Glasgow-based cerebral palsy charity said the "No" sign outside her home was vandalised numerous times, before being set on fire on Tuesday evening.

"You don't know what is going to happen next," she said. "You feel vulnerable in your own home. I've got video of a man climbing over our fence with a knife to cut it down.

"I have four children at home and it is not nice to see somebody climb onto your property holding a knife. It's been very threatening."

She said she had also been attacked on social media by pro-independence campaigners for posting images of the sign on fire.

Holly Harvey, who coordinates the Better Together poster campaign in Aberdeenshire, said that around two thirds of the posters across the shire have been destroyed, some within 24 hours of going up.

"It has been horrific," she said. "They have not just been torn down but they have been destroyed, stolen, or someone has cut out the no thanks with a Stanley knife."

Amanda Harvie, one of the organisers of the letter and a former chief executive of Scottish Financial Enterprise said: "These intimidating acts, some of which are apparently criminal, are stifling free speech and undermining our democracy. I hold the first minister fully accountable.

"Throughout the referendum campaign, Alex Salmond has refused to publicly condemn threats made against people who don't share his views.

"His silence implicitly gives approval to those who seek to damage the many business people and others who want Scotland to stay in the UK.

"Any intimidation, threat or attack towards business people is an attack on jobs since these people are the job creators who invest in Scotland.

"I want assurances from the First Minister that he will now take personal responsibility for protecting the right of everyone in Scotland to speak out without fear of negative repercussions, and ensuring the perpetrators of criminal acts carried out during the referendum campaign are brought to justice."

Accidental leak: Is this the All Blacks' real schedule?

The All Blacks' Bledisloe Cup schedule may have just been accidentally released.
BUSINESS

Plans progress for Kiwirail freight hub. Made with funding from NZ On Air.
ENTERTAINMENT

Hollie Smith and the NZSO had a little helping hand from Neve today.