The spaceflight company backed by billionaire Jeff Bezos will team up with a Boeing-Lockheed Martin venture to develop a US alternative to Russian-made rocket engines.

The announcement pits Amazon.com founder Bezos, 50, against fellow billionaire Elon Musk, the Tesla Motors founder who is developing a rocket and capsule through his Space Exploration Technologies business.

The partnership between United Launch Alliance and Bezos's Blue Origin has set a four-year development schedule, with full testing to begin in 2016 and a first flight in 2019, according to a statement today from the companies. The Boeing-Lockheed venture currently handles all US military satellite launches.

The competition has been brewing for years and has intensified as availability of the Russian-made RD-180 engines commonly used in US space launches is being threatened by diplomatic tensions over Russia's conflict with Ukraine.

"It's time for a 21st Century booster engine," Bezos, the founder of retailer Amazon.com, said at a news conference on Wednesday in Washington. The engine will be 100 per cent built and tested in the United States, he said.

Blue Origin's BE-4 engine has been under development for three years, and is high-performing while being low-cost, Bezos said. 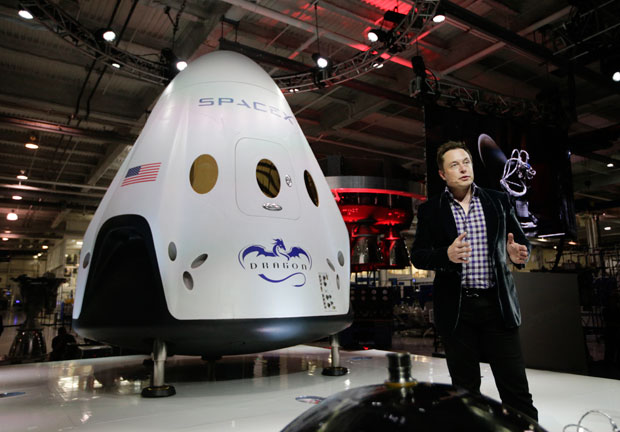 The competition is bigger than launching satellites. The National Aeronautics and Space Administration on Tuesday said Boeing and SpaceX would split $6.8 billion in federal funding to build the first US manned craft since NASA retired the shuttle fleet in 2011. In 2017, the Boeing-SpaceX craft would replace NASA's sole use of Russia's Soyuz rockets to get people to the station, an arrangement that costs about $70 million a seat.

United Launch Alliance uses in some of its flights Atlas V rockets, which rely on the RD-180 engine. US dependence on a Russian-made engine has prompted criticism in Congress since Russia annexed Ukraine's Crimea region earlier this year.

The US and the European Union have imposed economic sanctions on Russia in an attempt to get President Vladimir Putin to back down. Russian Deputy Prime Minister Dmitry Rogozin hinted in May that his country would cut off the supply of the engines to the US in retaliation for the diplomatic tensions.

What in the world would we do without satellites?

Elon Musk: The man who sold ideas to the world

In April he suggested via Twitter that the US consider sending crews to space "with a trampoline."

The NASA contract to ferry astronauts to the International Space Station will pay a maximum of $4.2 billion to Boeing and $2.6 billion to closely held SpaceX. Boeing and SpaceX may each conduct as many as six missions as part of the Commercial Crew Transportation Capability contract, NASA said.

NASA said on Tuesday it will continue to work with Blue Origin and another spaceflight company, Sierra Nevada, as they refine spacecraft designs.

Boeing was a crucial partner in NASA's Apollo and shuttle programs, and the United Launch Alliance has an exclusive contract to carry US military payloads.

Last month, the US Air Force issued a "request for information" from industry on potential options to replace the RD-180 engine.

For now, Russian and American astronauts continue to train together for Soyuz missions amid strained ties between the two countries.

US astronauts are slated to blast off for the space station in Russian launch vehicles on September 25 and November 23, according to a schedule posted on NASA's website.

Bezos, who is also the new owner of the Washington Post, is No. 21 on the Bloomberg Billionaires Index, a ranking of the world's wealthiest people, with an estimated net worth of $30 billion. Musk, 43, is ranked at No. 93 with a net worth of about $12.3 billion.

'Dropped it my a***': Family's stunning trophy claims against Crusaders

The Crusaders have denied accusations the Super Rugby trophy was 'left by the rubbish'.
BUSINESS

Covid-19: Morgan says Govt could, and should, roll out txt service within days

PLUS: The tech bro's surprisingly hostile take on the Govt's trial of his Covid Card.
ENTERTAINMENT