Disturbing video footage has emerged from West Africa showing an Ebola victim who escaped from hospital walking through a busy market, sending hundreds of people fleeing in fear.

In scenes which show both the terror felt by residents in the disease zone and the struggle the authorities face containing the virus, the man can be seen lashing out angrily at anyone who tries to confront him.

Read more:
• What's scary about Ebola, reasons not to fear it

Wearing a red shirt and marked with a tag telling people he has tested positive for Ebola, the patient is eventually surrounded by health workers wearing protective clothing and bundled into a waiting ambulance. 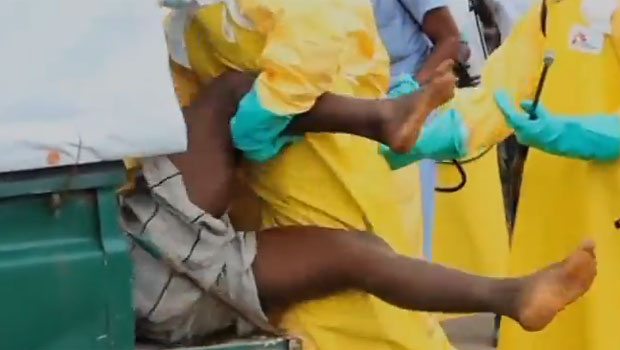 The man was eventually bundled into a truck by medical staff.

The incident took place in Monrovia, Liberia on Monday after the victim fled from doctors at the extremely overstretched Elwa hospital, whose Ebola unit is run by the international agency Medicins Sans Frontieres (MSF).

Last month, it was reported that Elwa doctors were forced to turn away suspected Ebola victims because of overcrowding, while locals told reporters yesterday that victims complained they were not being fed.

The man walking through the market in the video can be seen picking up bread, and was described by witnesses as simply being in search of food.

Liberia is the worst-affected country at the heart of what is the worst Ebola outbreak ever recorded, accounting for almost 700 of the total 1,552 deaths.

Read more:
• Explainer: What is the Ebola virus?

There is no suggestion that things are going to get better soon, with the latest World Health Organisation update indicating that the outbreak is actually accelerating, despite international aid efforts.

Ebola: A whole country in quarantine

In Liberia, food shortages and price inflation have been reported in areas where farmers are banned from tending to their crops for fear of the disease spreading further.

The shocking video from Monrovia comes as experts warn that Ebola is moving from West Africa's remoter towns to its teeming cities. Last week, the WHO warned that the number of cases could hit 20,000 if the situation is not brought under control soon.

The face of the TAB Mark Stafford has revealed that he was recently made redundant.
BUSINESS

After a confused start, some progress on poster usability.
ENTERTAINMENT

Revealed: How Golden Girls star is handling the Covid-19 pandemic

The 98-year-old star has kept strict restrictions while keeping herself busy at home.