Whether you’re looking to buy or rent, OneRoof.co.nz has everything you need to find your dream home.
© Copyright 2020
NZME. Publishing Limited
test test test
Swiss homes where mobiles and perfume are banned
7 Apr, 2014 5:40pm 3 minutes to read

The nitrogen pollution contributing to Britain's smog poses the biggest threat to wildlife that the public has never heard of with the potential to wipe out everything from clover to butterflies in eco-systems across the country, experts have warned.

Nitrogen stored in the soil as a result of soaring emissions from agriculture, power stations and cars has reached critical levels in the majority of non-agricultural land, according to Clare Whitfield, an air pollution consultant at the Government's statutory conservation adviser.

Nitrogen-rich soil reduces biodiversity because it causes species which thrive on nitrates to flourish at the expense of those that don't.

"Nitrogen represents a major threat to biodiversity in the UK and across Europe. It is an under-acknowledged and very big issue that has slowly crept up on us," said Ms Whitfield.

The rapid accumulation of nitrogen in the soil has already damaged eco-systems across the country as thick outcrops of beneficiaries such as grass, heather, thistles and nettles "swamp out" a wide range of species such as flowers, bees, beetles, lizards, snakes and spiders by depriving them of water, space, light and the other essentials.

High levels of nitrogen also cause problems by leaching into groundwater which can impair the blood's oxygen-carrying capacity in small infants causing "blue baby syndrome" and can be toxic for ruminants such as cattle and sheep.

The problem has got worse in recent years and, with the majority of eco-systems outside agriculture above the 'critical load' for nitrogen, that trend is set to continue, Ms Whitfield said. The critical load is the point beyond which the rate of nitrogen deposited from the air to the ground poses an increasing risk of habitat damage. 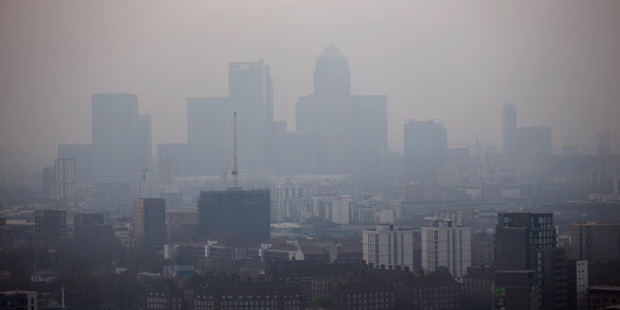 The skyscrapers of the Canary Wharf business district in London are shrouded in smog. Photo / AP

Once in the ground, nitrogen can remain for hundreds or even thousands of years. "The nitrogen level is building up all the time as we continue to add to the pot and increase the cumulative impact," Ms Whitfield added.

Her comments will increase pressure on the government to get nitrogen levels under control. Two months ago the European Commission launched legal proceedings against the UK for failing to reduce excessive levels of nitrogen dioxide air pollution from traffic.

Other European countries have also failed to meet the air-quality directive, which should have been adopted in 2008 but the EU Environment Commissioner, Janez Potocnik, has singled out Britain for its persistent breaches of the air quality directive. The Government has been sent formal notice of the intention to take Britain to court and has until 18 April to respond.

Living with disaster: Unshakable courage after a deadly quake

Unlike so-called natural and semi-natural habitats, which are generally harmed by rising nitrogen levels, farmland is benefitting from the increase - and fuelling it - because crops benefit enormously from nitrogen-rich fertilisers. Ammonia, a pungent colourless compound of nitrogen and hydrogen released by livestock exacerbates the problem.

Matt Shardlow, the head of the insect charity Buglife, said: "This is the biggest threat to biodiversity that the public is not aware of. For wildlife it really is a pernicious and pertinent cause of decline in very many species as the burning of fossil fuels turns the volume of nitrate falling on to habitats from a drizzle to a downpour."

A spokesman for the Department for Environment, Food and Agriculture (Defra) said: "Air quality has improved significantly in recent decades. Just like for other [EU] member states, meeting the NO2 (nitrogen dioxide) limit alongside busy roads has been a challenge."

Watch: Is this the worst blunder in league history?

A rugby league match from 2015 has recently gone viral for a 'ridiculous' reason.
BUSINESS

Many hurdles yet to be overcome for NZME to buy Stuff.
ENTERTAINMENT