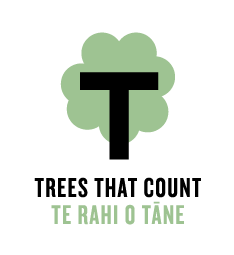 A surge in the number of native trees donated to charity Trees That Count for planting in the wake of the Covid-19 pandemic shows Kiwis are keen to "look after their big backyard", a leading environmentalist says.

Adele Fitzpatrick who runs the charity, says when New Zealand "went indoors (for level 4 lockdown) it gave nature a chance to come out and for us all to appreciate the beauty on our back doorstep. We'd love to see this appreciation of, and support for, our environment continue."

She says since Trees That Count started in 2016 a "massive" effort by businesses large and small helped them reach a significant milestone in early July: over 500,000 native trees funded and gifted through the charity's marketplace.

Now the charity is launching a campaign running to the end of September to build off this momentum; it is calling on business owners and decision-makers to fund tree planting as a way to help meet sustainability objectives – and to help New Zealand's threatened biodiversity.

The marketplace trees have helped close to 500 planting groups around the country who have applied to the charity for free trees. It works by businesses and individuals funding or gifting native trees which are then planted on their behalf by schools, iwi, farmers and community groups.

Fitzpatrick says the marketplace makes it really easy for businesses wanting a transparent way to do the right thing for the environment.

"We are working with around 450 businesses at the moment ranging from the local family-run fish and chip shop to three of the country's major banks," she says. "The businesses supporting us are really proud of the difference they're making and ultimately I would love to see every business in New Zealand taking part."

Fitzpatrick says a business donating to the charity has the opportunity to show its customers it is not only addressing sustainability challenges, but is "doing the right thing for New Zealand. Native trees provide habitat for native birds, bees, insects and invertebrates and the more of them we plant, the stronger our ecosystems will be."

The campaign comes as debate over the carbon-reducing merits of pine and native forests is occupying the minds of many businesses looking to reduce their carbon footprint.

In a recent Newsroom online report Euan Mason, a professor at the University of Canterbury's School of Forestry, said pine sequesters carbon at a rate at least double the average rate of native forest – although he also said he personally preferred native forest because "it's my heritage."

In the same report David Hall, a climate and forestry policy researcher at the Auckland University of Technology (AUT), said there is a lot less research on indigenous species, so sweeping comparisons may be unfair.

He said valuing natives solely for their carbon was "incredibly narrow" as there were also questions of biodiversity, resilience to climate change and cultural values to consider.

Ministry for the Environment figures show that New Zealand's forests removed 24 million tonnes of carbon dioxide from the atmosphere in 2017 and although Fitzpatrick agrees pines may, in the short-term, soak up carbon faster, she says natives also store and absorb carbon as they grow. And unlike pine, which needs to be clear-felled and replanted, they can live for thousands of years.

"Eighty per cent of our native trees, ferns and flowering plants are only found in New Zealand," she says. "Our unique species are something we're proud of and are part of our identity as New Zealanders.

Fitzpatrick says the charity works with planting groups who are passionate about planting native trees – and experienced in their care and maintenance.

"We only support permanent native forest projects with trees capable of growing to at least five metres in height and those that will provide significant biodiversity outcomes or enhance community wellbeing.

"We monitor the various plantings annually to ensure the trees have the best possible chance of thriving and each group has to prove to us they know what they are doing," she says. "We also have a team of regional advisors who are experienced ecologists. They do site visits and provide advice for any of our newer planters."

Head to treesthatcount.co.nz/businesses to see how you or your business can help.

A staff member received minor injuries in the incident.
LIFESTYLE

Can luxury fashion ever regain its lustre?

'That sort of typifies the type of leader he is,' says proud Warriors coach.