The Greens have accused New Zealand First leader Winston Peters of launching an "incoherent" attack on them during a positioning statement in which he suggested a Labour-New Zealand First coalition was being overlooked as a possibility post-election.

Greens co-leader Russel Norman said: "Winston is desperate for media attention in the last days of the campaign, so he plays games. He always does that."

Mr Peters said in the formal statement that the Greens had twice made an "assault" on Labour in the campaign: suggesting that its alternative Budget prepared by David Parker needed to be audited and suggesting they would like another co-operation agreement with National if it were in Government.

He expressed respect for both Mr Parker and for Finance Minister Bill English and said: "I see both of them as capable of being Ministers of Finance.

"This is not indicating a choice," Mr Peters said, "but the media seem to have overlooked one option entirely, a Labour-New Zealand First combination on coalition or confidence and supply.

"Voters need to be disabused of the view promoted by the Greens that we in New Zealand First would stand by whilst they promote extremist policies in Government."

Dr Norman said Mr Peters' statement was hard to work out from that "muddle of words", but if he was trying to say the Greens had not been sufficiently loyal to Labour, "this is from a guy who isn't clear about whether he will support a Labour-led Government or a National-led Government. It's totally incoherent.

"Anyone who plans to vote for Winston, well they're going to get games, endless games."

The statement by Mr Peters, whose party may hold the balance of power after Saturday's election, is the most definitive from him yet on post-election options.

It suggests Mr Peters could again keep the Green Party away from the Cabinet table in any Labour-Led Government, as he did in 2005.

The next Government: Finding a match

Old allies at odds in crucial seat for Maori

Your Views on GCSB spying allegations

In 2005, Helen Clark led a minority government with the support of NZ First, United Future, and the Greens on confidence and supply, but at the behest of Mr Peters restricted ministerial posts to only himself and United Future leader Peter Dunne.

The Greens have warmed their relations with Mr Peters and New Zealand First in the past three years in Opposition but clearly not enough for his liking - although he did not explicitly rule out working with them.

With the ruling National Party so far ahead in the polls, but probably still requiring support partners, much of the speculation about future governments has centred on a National-New Zealand First Government. 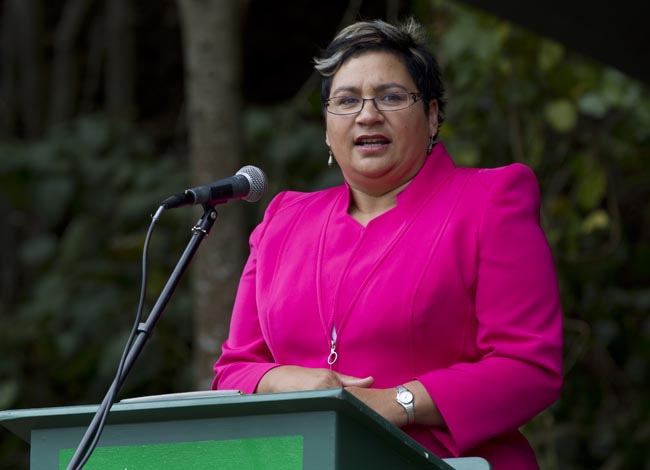 The Greens have warmed their relations with Mr Peters and New Zealand First in the past three years.

Mr Peters' speech is sending National a message that there may well be alternatives. The Greens' strong preference as determined by their AGM is to work with Labour in government and they have said it is strongly unlikely they would ever support a National-led Government.

Greens top for policies on poverty

The Greens have edged out Labour and Mana in a star ranking of party policies on what polls show is New Zealand's biggest problem - the gap between rich and poor.

An analysis by 19 groups including the Council of Christian Social Services gives the Greens an average of three stars out of four across six policy areas: getting people into skilled jobs, closing the wage gap, taxes and benefits, education, health and housing, and democracy.

Labour and Mana are rated half a point behind with an average of 2.5 stars each, followed by NZ First and the Maori Party both with 1.5 stars.

National, United Future and the Internet Party are all rated on one star each, the Conservatives rate half a star and Act is rated zero.

"The stars indicate efforts towards reducing inequality, so a zero means no effort or they don't have a policy," said spokesman Peter Malcolm, who co-founded Income Equality Aotearoa NZ Inc three years ago.

Mr Malcolm, 75, is the father of actor Robyn Malcolm, a well-known Green supporter, but said he had never belonged to a party.

Mr Malcolm's group joined with the Council of Christian Social Services and other groups to create the Equality Network coalition.

A Roy Morgan poll last month that asked people what was "the most important problem facing New Zealand" found that 18 per cent cited poverty or the gap between rich and poor, double the next-highest polling issue of the economy.

See all the ratings here.

Microlight crashes on takeoff at Hastings

Now you see it, now you don't: Where'd the Sky Tower go?

Warning: Harbour Bridge could be closed at short notice for wild weather