David Giles peered closely at the photograph on the screen of his computer.

On the thumb of Robin Bain, dead 19 years, were parallel marks of a kind he recognised instantly.

As a boy in the Waikato he would shoot rabbits and possums with a .22 rifle, the same calibre of rifle used to murder the Bain family.

Mr Giles told TV3's 3rdDegree show he knew instantly what he was seeing on his computer. Robin Bain carried the same marks on his thumb any shooter would have after reloading the magazine on a recently fired rifle.

The businessman at that point had an epiphany which seems to have escaped almost two decades of detectives and forensic scientists. If Robin Bain's thumb showed he had loaded the magazine, then surely he was the person who had walked room to room executing his family.

It would mean, he realised, David Bain had not killed his family. "I think it is very lucky the evidence has finally arisen."

The mystery of Every St in Dunedin has endured two trials and myriad appeals. The evidence released through the pugnacious policing of police by supporter Joe Karam makes it the most publicly scrutinised criminal case in New Zealand history.

Much of that evidence has emerged through Mr Karam's efforts challenging the police case that David Bain killed his family. The parallel lines on Robin Bain's thumb had never been raised.

Mr Giles emailed Mr Karam - one of many emails to come in with theories. Mr Karam took a magnified section of the key photograph to a gunshop and - without explaining where the photograph came from - asked the owner if he knew what the lines were. The answer: Gunpowder residue from loading a magazine.

It was an answer which would come time and again.

Mr Karam applied to the courts for access to the murder weapon for a range of tests. With defence lawyer Michael Reed, gun experts and defence forensic specialists - watched over by the Crown - a series of tests were carried out with the rifle.

These photos show how similar marks were left on fingers in similar situations: 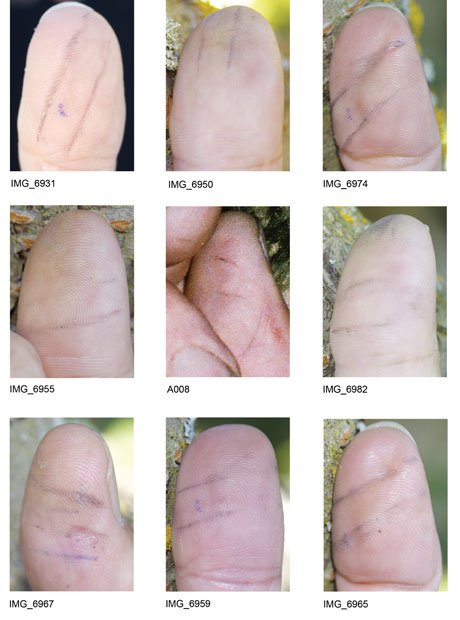 During the course of the testing, those present took turns loading the magazine and each were left with twin lines from the magazine.

Digital measuring would come, too. Using computer technology, they were able to measure the lines on Robin Bain's thumb and the "test thumbs", then compare them with the magazine. The distance between the lines and across the magazine matched perfectly.

In a signed statement, Patronus International director and firearms expert Keith Suddess, who studied the images, said the marks on Robin Bain's thumb "are consistent with a person loading and/or unloading the type of magazine shown in the photograph".

A former firearms instructor for Kent police and marksman for the British Army, he said he had seen "carbon deposits" of the sort pictured on his and his students' fingers and thumbs.

Photographic analyst Peter Durrant - originally brought in by police for the 1997 then-Police Complaints Authority inquiry - said "it's clearly not a cut". A cut on the skin tended to lift the skin at the edge of the wound back. "The marks we see here on Robin Bain's thumb could well have been made by him loading bullets into this clip."

There were two gun magazines in the Bain house connected to the murder weapon - a five-shot clip and a 10-shot clip. There were 19 bullets relevant to the murders - live bullets were on the floor and in the clip. The killer would have had to clear the jammed weapon and reload.

They appeared to be a greyish sludge residue.

The markings' width was a perfect match for the magazine of the rifle.

"If these marks are from a magazine and loading a magazine, then you're the guy who pulled the trigger. It looks to me like Robin Bain loaded [it]."

Mr Tiffin said he also had an answer as to how such an apparently crucial piece of evidence was missed.

"There was so much information. It's just taken a lot of time before someone has looked at it."

Another possible reason was the ease with which it could be removed.

Police have been criticised for how the crime scene was managed - and one recurring criticism was the failure to protectively bag Robin Bain's hands. It deprived police of the opportunity to later rely on tests for gunpowder residue on his hands. It also removed any chance the twin lines could have been preserved.

Richard Munt at Serious Shooters said: "They would have come off almost instantaneously."

An autopsy list of injuries to Robin Bain's hands covers every nick and scrape - but does not refer to parallel markings on the thumb, raising the question as to whether the marks survived the trip to the morgue.

David Bain was said to be probably innocent by retired Justice Ian Binnie in an inquiry ordered as part of a compensation claim. Justice Binnie's report was dismissed by Justice Minister Judith Collins, whose decision is now subject to a High Court judicial review in a case brought by Mr Bain.

In court, lawyers speak of the "bright-line rule". It is the use of objective factors to rule out any alternative or contradictory options. In the Bain case there has never been a bright line. But there are now two significant dark and grubby lines.

Pedestrian dies after being hit by car in Hikurangi

Police say the road is closed and diversions are in place.
NEW ZEALAND

Political Roundup: Where is the contest of ideas in the election campaign?

COMMENT: Quite frankly, the political parties don't seem ready for this year's election.