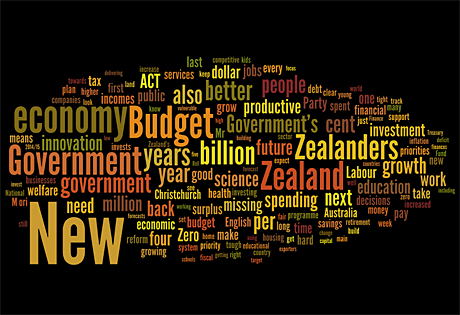 The Word Cloud above shows the Budget speeches from the major politicial parties. One of the standout words - economy.

The Government would rather build new schools and hospitals without having to borrow from overseas lenders while still maintaining a majority shareholding in those companies, he says.

It is projected to grow faster than countries such as the US and Canada, he says.

He says the Budget is about creating a better future for New Zealanders from all walks of life.

Skips have been moved onto the street to cut off traffic and buses have been diverted. See the video here.

The protest is aimed at opposing changes to student support flagged in the Budget, including cuts to allowances and new rules forcing loans to be paid back earlier.

Budget experts deliver their verdicts: Missed opportunities and no plan for growth