Whether you’re looking to buy or rent, OneRoof.co.nz has everything you need to find your dream home.
© Copyright 2020
NZME. Publishing Limited
test test test
DIY: Masters v. Disasters
13 Nov, 2014 9:35am 4 minutes to read

As she explained to TimeOut recently, after finishing Flags, she wanted to start exploring a new soundscape to set her voice against: "Different textures - spiky things and cold things and mechanical things, to bring out the tension and contrast and balance."

What is heartening to find is that such a creative exploration can be as satisfying for the listener as for the artist. These new electronic textures find her using sharper, heavier drums and bass, along with colder, deeper layers mixed with intricate, varied astro-synths, horns, strings, piano, and choral, almost gospel-like backing vocals. And with the help of producer David Kosten, she's made these the perfect foil for her strong, strident, voice, which swoops from pure, to fragile, to husky. It's a combination that reminds of Florence Welch, Ellie Goulding, and Feist, while still sounding distinctly like Fraser.

She hasn't wedded herself to any one genre - there's a little EDM, a little disco funk, hymn-like sections, some southern, blues tinged moments. But what all these elements add up to is still a grand pop record with an often cinematic flavour.

Psychosocial was the single that announced her new direction, and it kicks off the album too, all contrasting textures and mad intensity. Thunder follows, less hooky, but with a beautifully airy, percussive, big boogie beat and simple reverberating bassline that sucks you right into her almost-wailing, near a capella vocal.

Start a War might earn her a couple of vague Lorde comparisons, with its low groove and hip-hop inspired rhythmic patterns, but the anthemic chorus is all Fraser.

Watch the music video for Kings and Queens by Brooke Fraser:

Brutal Romance marks a change in pace, all sombre horns and strings, and perhaps feels a touch overblown in its epic nature, but Je Suis Pret offers a different ballad option, almost like a submerged prayer in its desperation, with rougher edges.

Some of the technological metaphors in Magical Machine feel a little clunky, but New Histories once again demonstrates her strong songwriting skills, with its hymn-like contemplation of life.

Fraser hasn't entirely left her old self behind, of course - there are still messages of salvation, empowerment, forgiveness, and political consciousness woven through her lyrics, but this new sonic palette and new-found attitude make Brutal Romantic an impressive step up, and mark the 30-year-old as a new pop star. 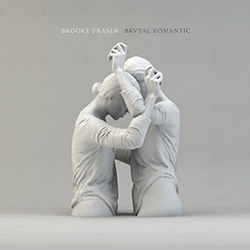 Dylan Cleaver: Every test century scored by NZ since 2010 - ranked

Of course you needed to know which was the greatest NZ test century of the decade.
BUSINESS

It was hoped the move would give suppliers more financial certainty during the lockdown.
ENTERTAINMENT

The best seven podcasts you should listen to today

Seven of the best podcasts to keep you entertained, including one for Tiger King fans.