Whether you’re looking to buy or rent, OneRoof.co.nz has everything you need to find your dream home.
© Copyright 2020
NZME. Publishing Limited
test test test
Depardieu: 'Maman tried to kill me'
6 Oct, 2014 11:42am 4 minutes to read

Yesterday, a massive power cut hit Auckland's leafy eastern suburbs. Many palatial homes and popular cafes are still without power, and police are crediting BMW drivers with taking care on the roads despite no traffic lights.

The good people of Remuera, Epsom, Orakei and St Heliers have stayed strong and resilient through the blackout. They are coping bravely in this crisis, and adapting. Bottles of Pinot Gris have been served at room temperature. Hair straighteners waived for the frizz. 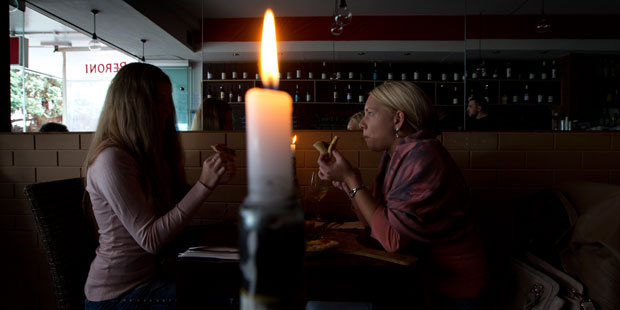 Aucklanders hunker down during the Auckland power outage. Photo / NZH

Ecoya candles burned brightly last night in homes across the Northern Slopes, but how long can our Auckland neighbours be prepared to put up with such sacrifices?

The power outage has brought the Auckland City community together.

Thoughts and prayers going out to everyone affected by the power cut in Auckland today. Kia kaha.

At their time of need our thoughts are with the powerless people of Remuera. Tonight we are all Remuerans. #AucklandPowerOutage

Bread instead of toast, cars trapped by electric garage doors, tea made on the BBQ. My heart bleeds for the victims of this tragedy.

Thanks to kind souls offering assistance in power outage. Have my mum safely at Omaha now. And no respect for idiots posting sarcasm....

The people of the eastern suburbs are strong, and have dealt with the situation as best they could.

Roughing it in the Auckland power outage, grinding the coffee with a mortar and pestle. #FWPs pic.twitter.com/PP65vmFVPj

How we survived the #AucklandPowerOutage in the middle of #epsom - BBQ breakfast! pic.twitter.com/xgCRbkXWxt

I'm at the supermarche and people are going wild buying torches

Have made it to a Westmere refugee camp to recharge iPhone & watch @allblacksrugby. First camp in Ponsonby (Prego) was full.

Residents kept up positive attitudes, and thought about future planning and safeguarding.

#no filter #candlenight and #tintin #bestthingever #kingOttokarsSceptre #aucklandpoweroutage ???? life without power could be amazing if planned well hehe View on Instagram

Others were frustrated. Even the rich and famous couldn't escape the terror.

Poss 48hr Powercut in E Auckland, how come I can't use the power off my PV panels? What a rort! When the system goes down my solar wasted?

Some Aucklanders were quick to come up with theories as to who could step up to save the day.

David Seymour borrows Antarctica NZ jacket from Bob Parker, strides among the good people of Remuera in their hour of darkness

'I have to be strong'

Key says there is power at his house

But he offered Churchillian advice in his capacity as Prime Minister.

PM says people should consider "extending the hand of friendship" to those affected by #AucklandPowerOutage. Party at John and Bronagh's?

Of course, everyone had their own ideas on helping others.

But human suffering was omnipresent.

@MsBevanChuang @lin_nah yup. No power, no internet... No car as locked inside garage (cant open without electricity) lol

Trying to keep equilibrium. But too dark to read, no TV, music or internet. Plus 4am start and cold shower ahead. Not funny #getourpoweron

Others were enjoying the blackout.

Power's just come on in Remuera. Shame.. we'll have to stop at lights again.

This person saw the return of power as a wifi welcome mat.

Back online in Epsom central. The bourgeois are saved from the most traumatic experience of the year.

But just to show that Remuera is home to real people like you and me who appreciate nana nights, there was this All Black.

Of course, humour kept spirits up.

Gaylene Preston rushes to Remuera to begin filming a docudrama on the power crisis. "It's not too soon," she tells reporters

Liam Dann: Why the Coronavirus correction is no GFC

Stock market panic over coronavirus doesn't mean we are in for a global financial crisis.
ENTERTAINMENT

Taika Waititi asked for people to come forward with more pictures of him sleeping.