Whether you’re looking to buy or rent, OneRoof.co.nz has everything you need to find your dream home.
© Copyright 2020
NZME. Publishing Limited
Dollar falls on ECB stimulus speculation
22 Oct, 2014 8:56am 2 minutes to read

Australian Dr Peter Moore had back pain. In an effort to relieve it he began to do his paper work standing at a desk instead of sitting. That was 20 years ago. Three years ago he started working in the Northern Territory in indigenous health. He needed a portable solution for himself and also something he could recommend to patients. After an unsuccessful search he decided to build his own. And so ZestDesk was born.

He and son James have now completed the prototype and are seeking kickstarter funding to bring it to market. Have a look at the videos. It's very streamlined and looks easy to use and move around.

What are the ups and downs (no pun intended) of standing desks?

1. Fewer sick days: A 2012 Vic Health report estimates that between 15 per cent and 22 per cent of all sick leave in Australia can be attributed to problems related to prolonged sitting.

2. Improved productivity: Using an app to measure productivity a startup incubator in Latvia put stand up desks to the test. They found that productivity increased by around 10 per cent by standing and working.

3. Better health: A 2013 BBC study found that people could burn up to 4kg in fat per year by simply getting off their chair and using their feet more.

4. Increased life expectancy: Prolonged sitting has been linked to heart disease, diabetes and cancer. The British Medical also found that by halving the number of hours we sit, that we could increase our life expectancy by up to 2 years.

5. According to a Medical Journal of Australia report, employers were told that they could be breaking safety laws by causing their staff to sit for excessive hours a day. In countries like Denmark, by law, employers must offer employees standing desks.

So, it looks like there are plenty of ups. What about the downs?

Robyn Pearce: Who to delegate to, even when you've got no-one

Price: Most of them are expensive. They range in price from $800 - $3,000, require installation and many companies want them matched with existing furniture. The Zestdesk is much cheaper, as is the New Zealand-made cardboard Meerkat Desk.

Inconvenience: I found that my Meerkat Desk is easy to pack away and the Zestdesk looks simple too. However, I've got a small desk so can't leave my Meerkat up when I'm ready to sit again. It's a quick job but still takes a minute to rearrange things. The Zestdesk will also need to be packed away or shifted to another location when you want to sit. Perhaps the ideal is to have two work stations in your regular office. Then you could move desks according to need. Several of my law clients do this.

(An upside of the Zestdesk is that it packs down into a portable case if you're on the road a lot.)

How long can you stand: From all my research it seems that the key is to vary your posture. Neither sitting nor standing all day in the same position is good for us. With products such as the Zestdesk we have easy and inexpensive equipment to suit our energy levels and the work we're doing. 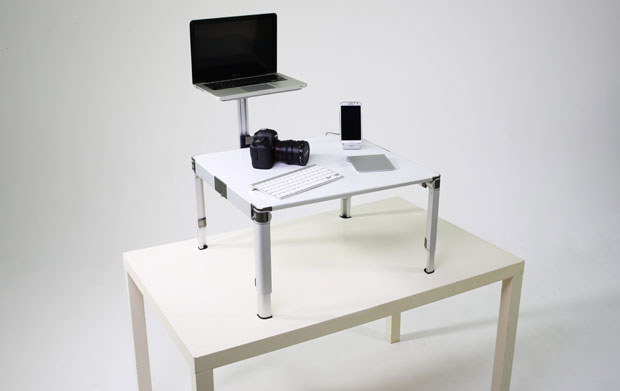 The ZestDesk has an elevated stand for your laptop.

Now I'm going to jump on one of my pet hobby-horses for the final comment. There's one other clever feature I really like with the Zestdesk - the elevated stand for the laptop. However - you'll only get top value from that if you're a touch typist. Otherwise you're still peering down at the keys. How to overcome that problem? Learn touch typing!

I don't know why it's not compulsory in schools - it's one of the most useful skills in today's keyboarding world. I didn't learn it at school but taught myself touch typing after starting my first job as a librarian (and we won't mention how many years ago that was!)

Rodney Keenan's business was scammed out of $30,000.
BUSINESS

What's the obsession with the presumption of innocence?