Whether you’re looking to buy or rent, OneRoof.co.nz has everything you need to find your dream home.
© Copyright 2020
NZME. Publishing Limited
NZ shares rise, led by Pacific Edge
4 Sep, 2014 7:48pm 4 minutes to read

The craft beer trend is growing fast. Is it all froth and fashion, or a real moneymaker? Christopher Adams reports.

Escaping the rat race and starting a brewery must seem an appealing proposition to many beer enthusiasts - a way to avoid office drudgery and the tyranny of middle managers.

And the statistics show New Zealanders are increasingly doing just that.

The number of beer companies has more than doubled since 2008, rising from 39 to almost 100 last year, according to industry research by ANZ.

A walk down the beer aisle at any supermarket reveals the explosion in local brands that has taken place over the past few years.

Roughly 11,000 people shrugged off bitter weather to attend last month's Beervana festival in Wellington, where more than 250 craft beers and ciders were on offer.

But while starting your own beer company sounds like great fun, is it an easy path to profit?

"No, not really," replies Stu McKinlay, co-founder of Wellington's Yeastie Boys craft brand. "But it's the best job in the world."

While Yeastie Boys is one of the country's best-known boutique beer labels - with about 60 per cent of its products exported to Australia, Asia, Europe and the United States - McKinlay only recently quit his position as a business analyst with Z Energy to focus on the beer trade fulltime.

With three sons aged under 10, he admits that chucking in the day job was a big call.

In a way, Yeastie Boys - established six years ago by McKinlay and Sam Possenniskie - epitomises the local craft brewing sector. It's run by passionate beer aficionados and is yet to take outside investment, but will need more capital to reach its growth goals.

ANZ's central region general manager for commercial and agri, John Bennett, says brewers will have to work hard to ensure their business models are robust enough to secure the investment they need to increase capacity and meet domestic and export demand for their products.

"A lot of brewers start off with family and friends' money, which is great, but it only gets you so far and if you're looking to attract either debt or equity investors then you've got to have a story that makes financial sense," Bennett says.

McKinlay says Yeastie Boys could raise expansion capital through equity crowdfunding - selling shares to the public through an online platform - to fund a planned move into contract brewing in Scotland, where beer for the European market could be produced instead of shipping it all the way from New Zealand, where Yeastie Boys products are contract brewed at Southland's Invercargill Brewery.

Most Kiwi breweries are undercapitalised, he says, which is a hurdle that needs to be overcome if the sector wants to maintain its growth trajectory. Craft brewers, however, can be unwilling to take on investment.

"It's a very personal business," McKinlay says. "You're making beer that's important to you and you're running a business that really reflects your personality so I think people can be a bit scared of taking on other investors who might try and push this way or that."

Equity crowdfunding appears to be a viable option for brewers after Blenheim's Renaissance Brewing last month raised $700,000 through the newly established platform Snowball Effect. Individual investments ranged from $500 to $50,000.

Renaissance will use the fresh capital to boost production and develop new markets in North America, Europe and Asia.

Other recent craft beer capital raisings include the 35 per cent stake in Kapiti Coast brewer Tuatara that Wellington investment company Rangatira bought last year, and the $16 million Moa raised through its 2012 listing on the NZX.

Bennett reckons the craft sector has the potential to grow exports by up to 300 per cent over the next decade, particularly as drinkers in Asia, especially in China, develop a taste for craft beer.

"To keep growth going breweries will have to look at offshore markets," says Bennett. "The New Zealand market is a finite size, which means that you've got to grow exports as well."

Beer exports from this country almost trebled from $19 million in 2004 to $56 million in 2012, before falling back to $41 million last year, according to ANZ's research.

Australia is by far the biggest export market for New Zealand brewers, followed by the US.

Ralph Bungard, president of the Brewers Guild, which represents craft firms, says it can be challenging for small-scale breweries to create the brand recognition and product supply required to break into export markets.

"You can certainly sell product but it's difficult to create an [export] market," says Bungard, who also owns Christchurch's Three Boys Brewery. "It certainly requires a large volume of product and when you think about the average size of the New Zealand craft brewery they'd be simply a drop in the bucket and wouldn't get beyond two or three [overseas] stores."

Craft beer accounts for only 2 per cent of this country's total beer market, if you leave out the craft ranges made by the big three - Lion, DB and Independent Liquor. It's thought to be about 10 per cent if those ranges are included.

In the United States, craft breweries last year had a 7.8 per cent share of that country's beer market by volume, and 14 per cent by value, according to the US Brewers Association. The figure is much higher in some states, such as Oregon, where craft has close to 50 per cent of the market.

Many Kiwi brewers look to the Pacific Northwest state as an example of the New Zealand craft market's potential.

"There's a place just outside of Portland [Oregon] which has something like 30 breweries and there's only 100,000 people there," says McKinlay. "Craft beer is mainstream there, which is really cool."

But the growth spurt in New Zealand's boutique beer sector is expected to produce some casualties. Luke Nicholas, founder of Auckland craft brand Epic, wrote a recent blog post which questioned whether a bubble was forming in the local market, given the meteoric expansion of brands and breweries over the past couple of years.

He expects liquor retailers to "rationalise" their craft beer ranges, a move that will hit brewers whose quality isn't up to scratch.

"There's only so much shelf space that they're prepared to give to craft beer," Nicholas says. "The good beers will stay there and the beers that don't sell are going to be moved off to bring the next thing on. That's how I see it anyway." 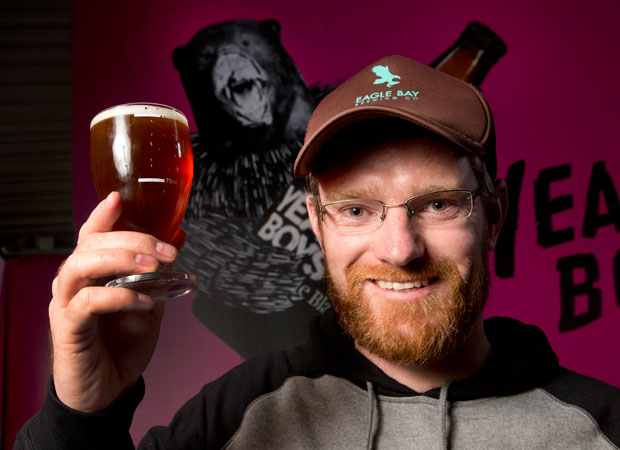 Adrian Klemp, general manager of Wellington's Fork & Brewer bar and brewery, agrees that some brands will "fall by the wayside". "It will be good for the industry on the whole because it will increase the quality of beer," he says. "And the consumer is becoming more aware of it [quality] - they're starting to pick up faults."

"They make some great dollar margin out of craft per square inch of retail space. They probably make more out of a single bottle of craft beer than they do out of a 12-pack [of mainstream beer]."

With such a vast range of brands available, capturing drinkers' attention and gaining brand loyalty can be difficult.

Nicholas says some brands have attempted to overcome such challenges through "buying market share" by undercutting competitors on price.

"It's kind of a dumb game to play," he says. "You should be maximising your margin while you can because we're not going to have the margins like we do currently forever."

Commentators in the US have raised the prospect of a craft bubble, and burst, there. The number of US breweries has ballooned from 89 in 1979 to 2358 last year. However, some observers say the US beer market is simply returning to normal after many decades of domination by large, corporate brewers.

Beer writer Dan Shapiro points out that the US has gone from having one brewery per 30,000 people in 1887 to one per 126,000 people now. "In those terms, we're practically in a recession," Shapiro argues in an online article.

Per head, New Zealand has many more beer companies - roughly one for every 47,000 people - but McKinlay doesn't think there's any risk of a craft bubble here.

But he says the sector is gaining critical mass and social media is becoming an increasingly powerful marketing tool for driving growth. Yeastie Boys has more than 6700 Twitter followers, while Epic has a whopping 20,000. Indeed, while overall beer consumption has been in decline in this country, craft beer output is growing by about 25 per cent a year.

With so many brands vying for such a small slice of the total beer trade, it would be easy to assume there is cut-throat rivalry between craft firms. But brewers say the relationship between companies is often much closer to collaboration than competition. It's common for ingredients and even beer recipes to be shared.

"We're not fighting over 2 per cent [of the market]," says Jos Ruffell, co-founder of Wellington's Garage Project brewery. "We're rapidly expanding into the other 98 per cent."

He says breweries are increasingly collaborating in export markets.

"We share a distributor in Australia with Tuatara, Yeastie Boys, Renaissance and ParrotDog and we routinely share containers," Ruffell says. "If we don't have enough beer to fill a container we can reach out to another brewery across town and work to fill that load."

While there may be lots of potential for Kiwi craft beer exports, McKinlay's aims for Yeastie Boys are relatively modest.

"I just want to remain at the forefront of making interesting and exciting beers and be able to pay myself and wife a nice wage that we can live on," he says. "Hopefully in 10 years' time when my kids reach school-leaving age we'll be in a position where they look at what I do and can think they don't have to go to university and get an office job."

Minister's letter apologising for accusations of leaking is itself leaked

NZ First Foundation investigation: What happened behind those courtroom doors?

While there were rumours and rumblings, when charges were laid last week, nobody knew.