Whether you’re looking to buy or rent, OneRoof.co.nz has everything you need to find your dream home.
© Copyright 2020
NZME. Publishing Limited
2.5 million free-range eggs faked
5 Aug, 2014 3:56pm 3 minutes to read

It's not every day that Argentina defaults on its debt. It just seems that way.

OK, that's not entirely fair. After all, it's been 13 years since the last time it did. That's not bad for Argentina, which has now defaulted eight times in its 200-year history.

But this latest one was certainly its strangest. Argentina didn't default because it couldn't pay its bondholders. It defaulted because a New York judge wouldn't let it pay its bondholders - not unless it also paid the hedge funds that were holding out for a better deal on its old defaulted debt.

Yes: Argentina was forced to default now, because it wouldn't pay the bonds it had defaulted on in 2001. Confused? Well, here's what you need to know.

1. Once upon a time - 100 years ago, to be exact - Argentina had the fifth-largest economy in the world. But decades of bad policies, worse governments and general incompetence turned this one-time powerhouse into a cautionary tale of default and devaluation.

It worked, until it didn't. Inflation came down and foreign capital came in, but at the cost of making countercyclical policy impossible. So if a big shock hit Argentina's economy, it wouldn't be able to cut interest rates to cushion the blow, because its currency peg meant it could only do that when the Fed did.

And that, of course, is exactly what happened when Europe's and Brazil's currencies fell so much that Argentina's exports suddenly became seriously overpriced in 1998.

Argentina needed a weaker peso, but it couldn't get one - not without abandoning its dollar peg. Instead, it was forced to cut prices by cutting wages. The problem, though, was that this only pushed unemployment up and tax receipts down.

Lessons from turnaround of the Golden State

Argentina at brink of default

And that left Argentina in a catch-22. It had to raise taxes and cut spending to reassure investors about the deficit, but that made the slump even worse - which wiped out any savings. In other words, austerity was both the cure and the disease. So it was really just a disease.

By late 2001, it was hard for things to get much worse. Unemployment was 20 per cent, and there was a run on the peso - along with the banks that had them - as people tried to turn their money into dollars. The government tried to stop the run by limiting withdrawals, but this only started violent protests. So, finally, Argentina did what it's always done: it defaulted and devalued.

This $100 billion default - at the time, the largest ever - might have been the most responsible thing an Argentinian government has ever done. Now, that's not to say there weren't any costs. It's cut the country off from international capital markets ever since, and that's limited growth.

But not as much as the alternative - a deflationary spiral. Indeed, Argentina's economy has actually grown pretty well the past 12 years, despite relapsing into double-digit inflation.

2. Back in its customary role as a financial pariah, Argentina tried to make at least a little good on its obligations. In 2005 and 2010, it offered the holders of its defaulted debt - which was still trading at deep discounts - new "exchange bonds" that paid about 35 cents on the dollar of the original ones.

It was an offer they couldn't refuse. If investors said no, they got nothing. And it's not like they could force Argentina to pay them more. How many divisions does Wall Street have? That's why 93 per cent of the old bondholders accepted the new ones.

3. So what were the other 7 per cent thinking? Well, they were mostly hedge funds that had bought up Argentina's defaulted debt on the cheap, and thought they could sue for a better deal. A much better deal. They argued that a cookie-cutter clause in the old bonds - what's known as pari passu - meant that Argentina had to pay them in full if it paid the exchange bonds at all.

It's a question of what "equal treatment" means. As Joseph Cotterill explains in the Financial Times, pari passu clauses just say that borrowers have to treat all bondholders the same. You can't pay some back, but not others. Sounds pretty innocuous. But is it? The hedge fund holdouts said it really meant that Argentina couldn't force a debt restructuring. That the defaulted bonds and exchange bonds were really the same, so if Argentina paid any it had to pay all. 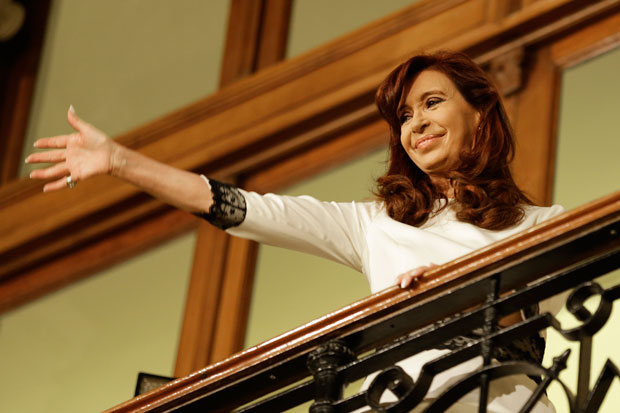 4. It's a clever argument, but cleverness isn't enough to make a country pay you if it doesn't want to. That's why this legal dispute has gone from the arcane to the absurd. It's not just about winning the case. It's about making Argentina accept that you have.

Take Elliott Management, the most aggressive hedge fund holdout both in and out of court. It's spent the better part of a decade suing Argentina to get it to settle for more.

And when that's failed, it's turned to less, well, conventional methods to bring them to the negotiating table. Back in 2012, Elliott actually got Ghana to seize an Argentinian boat as partial payment for what it said it was owed. But even this strong-arm tactic wasn't strong enough to make Argentina any more cooperative. The boat was eventually released without a deal.

5. But now the holdouts might finally have what they need to make Argentina pay up: a New York judge. See, in 2012, Judge Thomas Griesa ruled that the holdouts were right about pari passu: Argentina couldn't pay the exchange bonds without paying the holdouts, too.

Now, if that was all he'd said, Argentina could have continued to ignore it consequence-free. But there was more. Griesa also declared that if Argentina didn't start paying the holdouts, any financial institution that helped it pay the exchange bonds would be in contempt. In other words, Griesa would prevent Argentina from paying anyone.

That left Argentina with a choice: It could either pay the holdouts, or it could default on the exchange bonds even though it was able and willing to pay them.

6. Argentina chose default. There were billions of reasons to do so. It owes all the holdouts a total of about $15 billion, and paying that could create hundreds of billions of new obligations. That's because the exchange bonds have "RUFO" (Rights-Upon-Future-Offers) clauses that, until the end of this year, promise them whatever the holdouts get.

In the first case, the holdouts would get some kind of (maybe backdoor) settlement, and the exchange bondholders would agree to waive their RUFO rights, which some have already offered to do.

In the second, the holdouts would get nothing, and the exchange bondholders would agree to another exchange, this time for bonds set up exclusively in Argentina - outside Judge Griesa's reach.

Or maybe it never ends.

This is probably the dumbest default in history. As Felix Salmon points out on medium.com, it might have actually made the exchange bonds worth more. That's because Argentina will - presumably - pay them in full at some point, but, in the meantime, the bonds are earning 8 per cent interest on the missed payments.

It's a nice Seinfeldian touch for a fight that only he could love: it's about nothing. Well, almost nothing. It's about whether Argentina or Elliott Management will get a few billion dollars. And that's it. Argentina's economy is already in recession, and probably won't get much worse.

It'll be fine - which for them means lots of inflation - either way. So will other countries, which now have collective action clauses in their debt to prevent these kind of pari passu cases.

At this rate, Argentina really might default on its debt everyday - at least for a while. Giddy up.

The airline is working on ways to cope with a plunge in passenger numbers.
BUSINESS

Q&A: What does coronavirus mean for NZ?

It's looking ever more likely coronavirus will reach NZ. What will that mean?