Not all beer drinkers want to grab a cold one.

Molson Coors Brewing discovered this in China, where it altered the cold-activated bottles and cans last year for Coors Light featuring images of the Rocky Mountains that turn blue when the beer is at ice-cold temperatures.

Drinking cold liquids is widely seen as undesirable in China. Warmer beverages are considered healthier for digestion, an idea that also stems from the traditional habit of boiling water to make it safer to drink.

In light of this custom, "we dropped the temperature for the thermochromatic ink, and it still turns blue, but it's not so cold," Peter Swinburn, chief executive officer of Molson Coors, said in an interview last week.

Such attention to detail is key to Molson Coors as it pursues growth in developing markets. Rising incomes and a growing middle class are helping drive sales in countries such as India and China, where beer volume is predicted to grow 7.9 per cent and 3.6 per cent in the five years ending 2018, according to Euromonitor International. Volume is forecast to fall in the US and Britain by 0.7 per cent.

Molson Coors, which has dual headquarters in Denver and Montreal, began expanding in developing countries over the past four years. In addition to its recognisable brands such as Coors Light and Carling, the company has a portfolio of local beers that cater to cultural palettes.

In April, Royal Brew -- a whiskey-flavoured beer -- was introduced in India, appealing to the country's preference for hard liquor.

"We take into account local drinking habits, but brand identity will remain the same," said Krishnan Anand, president and CEO of Molson Coors International, who points out that in contrast to China, people in many of the Caribbean island countries drink Coors Light at freezing temperatures.

The company has paid particular attention to China, where development began a decade ago. Sales in China have had a steady growth rate of 15 per cent to 20 per cent for the past eight years, according to Anand. 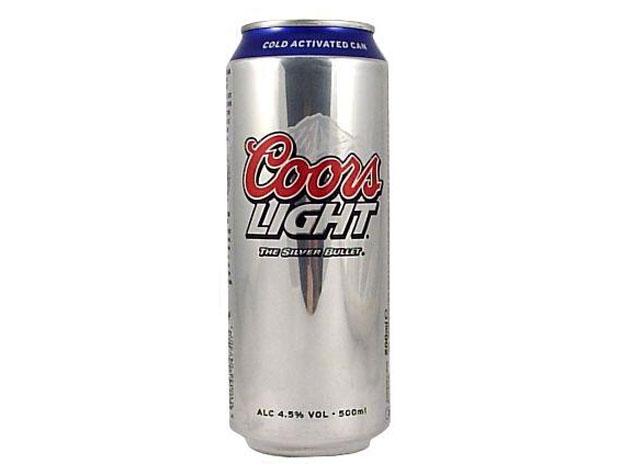 The mountains on the Coors Light cans and bottles turn blue at 5 to 7 degrees Celsius in China. Photo / Twitter @HeritageWinesSp

Molson Coors' core markets -- the US, Britain and Canada -- are in decline, said Brian Yarbrough, analyst at Edward Jones in St. Louis.

"They are looking for faster-growing markets to see consumption trends move up, which is why they're looking to international markets," said Yarbrough, who has a hold rating on the shares.

As international volume almost tripled in the past four years, Molson Coors is able to reduce investment per hectoliter of beer, according to Colin Wheeler, a company spokesman. The company's international unit is still "in investment mode" and close to reaching profitability, he said. Chinese drinkers prefer their beer a little warmer than in the US. Photo / Wikimedia - MobiusDaXter

The international side is a very small part of Molson Coors' business so far, Yarbrough said. The company continues to invest internationally, even as it loses money, because it places the brand in a market with rapidly growing opportunities, he said.

International revenue, excluding Canada and Britain, surged more than eightfold to $999.5 million in the three years through to 2013, making up about 17 per cent of the company's total revenue. The majority of sales come from Canada, at $1.8 billion, while the US had $105.2 million.

Rather than buying large local companies like its competitors, Molson Coors seeds brands through marketing and innovation, Anand said.

"Ours is the old-fashioned way of taking our brand and building it country by country, bar by bar, and consumer to consumer," he said.

Small business: Mums clean up amid lockdown with eco-cloths

Cleaning products and anti-bacteria products are in demand right now.