Whether you’re looking to buy or rent, OneRoof.co.nz has everything you need to find your dream home.
© Copyright 2020
NZME. Publishing Limited
Landcorp considers business case for milking sheep
1 Jul, 2014 1:17pm 3 minutes to read

Big deals are back. To fund them, buyers are using a little creative thinking and a lot of common stock to fuel the best quarter for global takeovers since 2007.

As they agreed to more than $900 billion of purchases in the second quarter, acquirers turned to their rising stock prices to finance the deals. For buyers with public listings, all-cash offers made up about one-third of the takeovers announced in the second-quarter, data compiled by Bloomberg show.

A year earlier, all-cash bids accounted for two-thirds of deals, and in the five years through 2013 they averaged 50 per cent, according to data compiled by Bloomberg.

In some cases, massive price tags meant buyers had to use shares: AT&T, which ended March with just $3.6 billion in cash and equivalents, is paying $48.5 billion for DirecTV with two thirds of that in its own stock -- a move that will help protect its creditworthiness.

In others, it is mandatory: Medtronic is acquiring Covidien for $42.9 billion in part to gain its Irish tax domicile. To comply with US tax laws, that kind of deal -- known as a tax inversion -- requires the buyer to use its shares as part of the deal.

Read also: Medtronic biggest yet to renounce US tax citizenship

"By their very nature, truly transformational deals are likely to require a combination of cash and shares," said Robert Rankin, co-head of corporate banking and securities at Deutsche Bank in London. "The equity rally over the last 12 months has helped facilitate large transactions."

Drug companies, meanwhile, are using a third way to structure deals -- swapping assets and forming joint-ventures as part of purchases.

The Standard & Poor's 500 Index, which reached records in June, trades at 17.9 times reported profit, the highest multiple it's fetched since 2010, according to data compiled by Bloomberg. The Stoxx Europe 600 Index reached a price-to-book value multiple of 1.9 times this month, its highest since 2008.

Broadly, global acquirers made $913 billion of purchases in the quarter, data compiled through to June 27 show. That's the busiest quarter since the third quarter of 2007, and nearly twice the average quarterly value of $555.6 billion in the prior five years.

Goodman board backs $1.37b bid

Medtronic biggest yet to renounce US tax citizenship

European buyers have made the biggest shift away from cash, the data show, with all-cash purchases falling to just 28 per cent of the $88 billion of takeovers announced by public companies during the quarter, compared with 68 per cent from 2008 to 2013.

Among US buyers, all-cash purchases accounted for 31 per cent of the $331 billion in deals announced, compared with 45 per cent in the five years through 2013.

The largest purchase by a European acquirer in the quarter highlights just how desirable shares can be: Holcim's $40 billion merger with cement peer Lafarge SA was paid for entirely in stock. And General Electric only secured its purchase of Alstom SA's energy assets when it offered up its rail-signaling business, after rival joint bidders Siemens AG and Mitsubishi brought a complex package of assets sales and joint ventures to the table.

"The market is reacting well to many of these deals, so sellers are willing to take stock knowing that the market will likely reward the deal after," said Steve Baronoff, chairman of global M&A for Bank of America Merrill Lynch.

Not everyone wants stock. Allergan is resisting a $54.2 billion takeover bid by Valeant Pharmaceuticals International in part by saying its shareholders have "nothing to gain" in owning a piece of Valeant -- a very different business to the research-driven maker of Botox.

"You have to be pretty optimistic about the market and the synergies the merger will produce, said Erik Gordon, professor at the University of Michigan's Ross School of Business in Ann Arbor. ''Synergies seem to disappoint time and time again. The stock deals we're seeing are either a sign of ignoring the high price of stocks right now or of being very optimistic about the market." 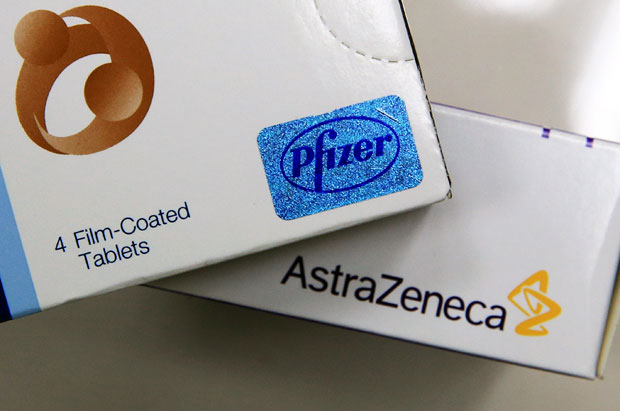 Cash was also cited as a key sticking point in Pfizer's failed $117 billion bid for AstraZeneca, with the target's board rejecting the higher offer even though it bumped the cash component to 45 per cent from 32 per cent.

"It may be harder to get deals done with shares because both sides need to feel comfortable so it takes a lot more time and dialogue," Mark Warham, the London-based head of M&A in Europe, the Middle East and Africa at Barclays Plc said in a phone interview.

"Companies are usually more reluctant to engage in deals that involve equity as it can be a more expensive currency and it carries the potential risks of being diluted or is subject to equity market volatility."

There's a third way: In April, Novartis struck a deal in which it effectively swapped part of its consumer-health business for GlaxoSmithKline Plc's as part of a series of transactions worth $28.5 billion in total.

"The current market environment allows deal makers much more space to be creative in considering a variety of alternative transaction structures such as asset swaps," said Vikas Seth, co-head of EMEA and global emerging markets M&A at Credit Suisse Group in London.

Merck, which also had discussed swapping its consumer-products business for some Novartis's assets, instead agreed to sell the unit to Bayer for $14.2 billion. As part of the deal the companies said Merck would pay Bayer $1 billion for a collaboration to develop and market certain drugs.

"We are seeing an increasing amount of companies that are willing to do deals with more creative structures," said Hernan Cristerna, global co-head of M&A at JPMorgan Chase.

"It's not just about the cash alone. These type of structures are becoming more and more common as companies continue to engage in conversations to seek growth through M&A."

Union: "It shows a lack of respect for the workforce that keeps their company moving."
BUSINESS

A Chinese company has told staff to stockpile emergency supplies during the pandemic.
BUSINESS