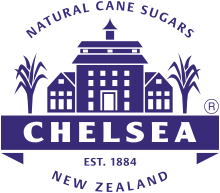 That old sugar tin in the pantry could turn out to be a Kiwi icon – and so could the new ones currently "flying off the shelves" in supermarkets.

Chelsea Sugar have just released a new limited edition of sugar tins, free with purchase from your local supermarket – but they have also started a hunt for New Zealand's oldest Chelsea sugar or Golden Syrup tin, possibly over 135 years old.

The three new tins – the Caster Sugar tin, the Icing Sugar tin and the Soft Brown Sugar tin – have already caught the attention of shoppers.

Chelsea Sugar Marketing Manager, Tracey McKay explains: "We've released sugar tins only periodically – the last time about 20 years ago. They have become collectors' items and it seems the new ones are heading the same way; they're flying off the shelves."

The new tins (pictured) aren't available online and, as there are only 100,000 spread across supermarkets nationwide, McKay says Chelsea's social media has revealed people are searching for them as stocks already grow thin.

"We had one person on social media say she'd gone to four supermarkets to find one," she says. "We know people like to hang on to these tins and that the Chelsea Golden Syrup tin, in particular, has become iconic and a real piece of Kiwiana, up there with the Edmonds Baking Powder tin.

"I went onto TradeMe when I discovered we had a few gaps in the tins in our archives – and I found them there, costing up to $20 or so. TradeMe is a pretty good indicator of social interest in such things and it was interesting to find the tins there.

"Chelsea sugar and syrups have been a Kiwi pantry staple since 1884, dating from the aftermath of the industrial revolution, through war time, boom times and the wild ride that is 2020 – Chelsea's history is immensely rich," says McKay.

Sugar was originally transported in sacks, with shopkeepers using scoops to dole out individual amounts to shoppers. Sugar was first sold in bags in the 1930s.

"So we think the oldest tin will likely be a Golden Syrup tin, not sugar," she says, "but our nationwide search could give Kiwis an opportunity to share favourite family memories associated with their tin."

If you or someone you know has an old Chelsea sugar or syrup tin at home please email promotions@nzsugar.co.nz

"There's no place to hide"

A passion for speech

The perfect 10? Near-faultless All Black leaves Wallabies in tatters

All Blacks blitz Wallabies in biggest ever Bledisloe Cup win