Whether you’re looking to buy or rent, OneRoof.co.nz has everything you need to find your dream home.
© Copyright 2020
NZME. Publishing Limited
test test test
Erakovic out of Wimbledon
24 Jun, 2014 4:45am Quick Read

Here's a new travel game for all ages with a rather frightening outcome ...

Geoff Bostock writes: "My mate and I started this out of sheer boredom at the end of a lot of travelling. You start the game, in the dark, at around the Bombay Hills heading into Auckland. First, count the number of cars with only one headlight coming towards you, then count the number of cars with no headlights on ... After many times playing this the one-headlight count is around 60 and the no-headlight count has reached eight. We finish the game at the North Shore Constellation Rd exit."

Pet dog gets a taste for fashion
"Having lived on several lifestyle blocks in my time, I do know that goats will eat almost anything, including tablecloths off the washing line," writes Petrus van der Schaaf. "However, I did get a little surprise last weekend when, during a three-day stay with friends, their sweetest dog tucked into a rather classy merino/possum-blend jersey of mine - taking chunks of material with the intention of eating them. I figured it must have been the possum fur in the mix that triggered his hunting instincts. Has anyone else had this rather disconcerting experience?"

Going with the grain
Grey Lynn Park tree update: "The fallen gum tree's chances for an extended life as an adventure playground look pretty good ... Last Thursday,Waitemata Local Board member Vernon Tava met on-site with a parks adviser and an arborist. Vernon said there was 'huge community support for keeping the tree in situ'. The arborist reported back that '. . . it would be fantastic to leave the root plate, as with the root plate the object still looks like a tree'. On Friday, a crew of arborists cut off all the larger branches, leaving them for firewood for neighbours, and tidied up the site. On Saturday, neighbourhood kids just kept climbing all over it." 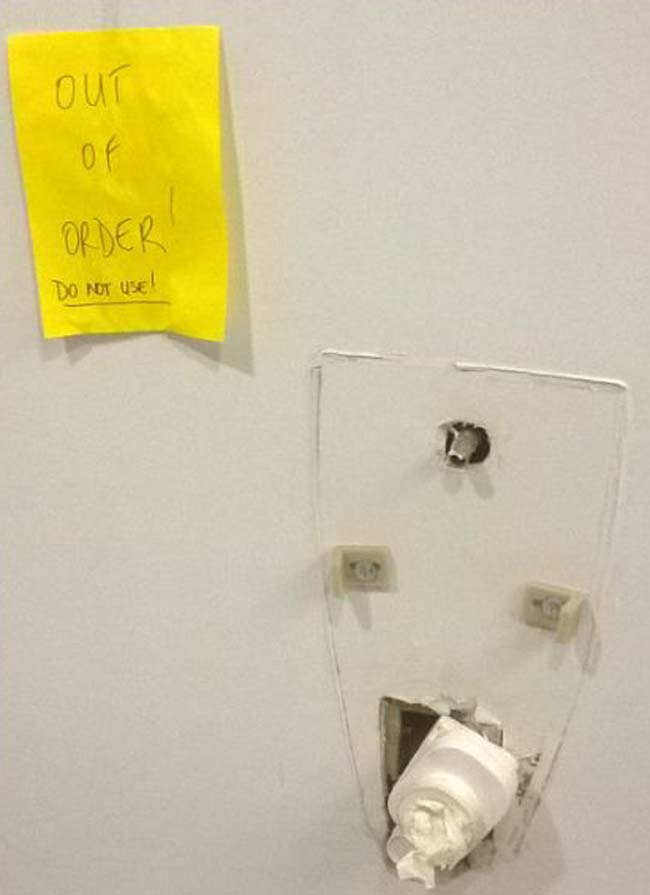 A reader writes: "We are having some work undertaken in the men's toilets in our building ... not quite sure exactly how you would even attempt to use these urinals."
News: U.S. exchange student has to be rescued by fire fighters after getting stuck inside giant stone vagina sculpture...

Local: We used to stand up for what we thought was wrong in New Zealand, so good on Radio Live's Gruntin Darner for taking the lead with this issue. Even if you can't be arsed getting off yours and locking arms on a rugby field and accept our nuclear-free stance as just symbolic, at least you can sign a petition to stop the booze cartels opening up a Thirsty Liquor outlet right opposite a school in M?ngere. Do something. Sign here...

Video: A Brazilian family with a rare genetic disorder giving six fingers on each hand has become a symbol of their nation's hopes to bring home Brazil's sixth world cup title.