Maurice Williamson has resigned as a Minister.

It follows Herald revelations he contacted a top ranking police officer after a wealthy businessman with close ties to him was arrested on domestic violence charges.

The Prime Minister's office is understood to have also questioned Mr Williamson over his involvement with Donghua Liu's criminal case.

National MP Maurice Williamson crossed the line in making a phone call to police over the case of a wealthy businessman, Prime Minister John Key says. Mr Williamson told a senior police officer that the businessman, Donghua Liu, who was facing domestic assault charges, was "investing a lot of money in New Zealand" and urged police to be on "solid ground", according to internal police emails.

"I have been made aware that Mr Williamson contacted Police some time ago regarding their investigation of Mr Donghua Liu," Mr Key said.

"Mr Williamson has assured me that he did not in any way intend to influence the Police investigation.

"However, Mr Williamson's decision to discuss the investigation with Police was a significant error of judgement.

"The independence of Police investigations is a fundamental part of our country's legal framework.

"Mr Williamson's actions have been very unwise as they have the potential to bring that independence into question," Mr Key said.

Profile: Who is Maurice Williamson?

8 politicians who were forced to resign

Williamson will hold a press conference at 1.30pm.

Mr Williamson today resigned his ministerial portfolios after the Herald revealed he phoned a senior police officer about the criminal charges that Liu was facing. Prime Minister John Key said today Mr Williamson "crossed the line", despite assuring him that he did not intend to influence the prosecution.

Mr Williamson has held the Pakuranga electorate seat since 1987. He is the Minister for Customs, Building and Construction, Statistics, and Land Information and has previously held the Transport, Science and Technology, Broadcasting and Communications portfolios. 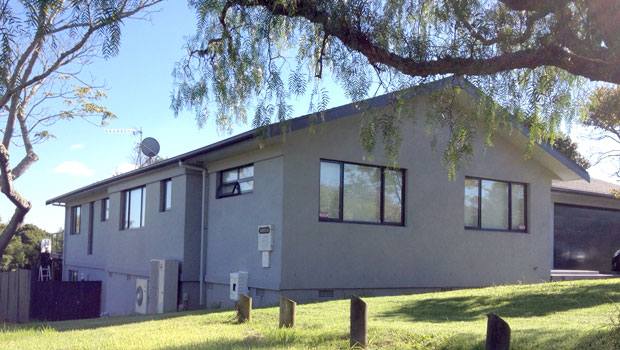 Maurice Williamson was at his Pakuranga home this morning - but not answering the door. Photo / Brett Phibbs

Mr Williamson was at his home in Pakuranga this morning. A man who answered the door referred all questions to Mr Williamson's press secretary.

"He is (home) but he's really busy, you will have to go through his press secretary".

All blinds in the house were drawn and there were several cars parked in the driveway.

Mr Williamson has previously lobbied ministerial colleagues to grant New Zealand citizenship to Liu against official advice and also asked Prime Minister John Key to open a hotel as the first stage of an ambitious project to rejuvenate the derelict site in Newmarket.

Liu was arrested following a domestic violence incident with his de facto partner and her mother at the Boulevard Hotel in December and has pleaded guilty to assaulting a woman and assault with intent to injure.

A Herald investigation can now reveal that Mr Williamson, who holds several ministerial portfolios including Customs, called a senior police officer in Auckland following the arrest of Liu.

An Official Information Act request to the police was refused this week, on the grounds of privacy and maintenance of the law, but the Prime Minister's office was alerted by police under the "no surprises" policy.

He said the minister's resignation did not dispel the larger issue of ministerial impropriety on behalf of National Party donors.

"It is very important the public knows the nature of Maurice Williamson's contact with the police.

"Was he seeking to get a National Party donor off a domestic violence charge? Are there other legal issues that sort of intervention triggers?"

He said it was "particularly distressing" that the intervention related to a case of domestic violence.

"All MPs should be supporting the elimination of domestic violence and have a zero tolerance policy towards it."

Dr Norman questioned when the Prime Minister was first made aware of Mr Williamson's actions.

"Was he simply hoping that information wouldn't come out and has he been involved in covering it up?"

He said Mr Williamson's resignation showed a double standard in National's response to conflicts of interest.

"Clearly the Prime Minister is attempting to show that he does have some standards but ironically Mr Williamson's case, as with others, proves just how duplicitous those standards are."

"If Mr Williamson has offended, and he has, then why will the Prime Minister not act in the case of Judith Collins?"

Read more of the Herald's recent coverage of Donghua Liu:
• Businessman in citizenship row admits charges
• Editorial: Ministers and immigration shouldn't mix
• Weeds choke $70m dream
How it unfolded:
2010: Businessman Donghua Liu granted NZ citizenship by Nathan Guy, the then Minister of Internal Affairs, against official advice after being lobbied by Maurice Williamson, Minister of Building and Construction, and John Banks, the Auckland Mayor at the time.

2012: Roncon Pacific Hotel Management Holdings Ltd - of which Mr Liu is a director - makes a $22,000 donation to the National Party.

2014: Liu pleads guilty to both charges.

Response from police to Herald request for information:

It's been a day of tragedy, but there is a glimmer of hope.
NEW ZEALAND