Whether you’re looking to buy or rent, OneRoof.co.nz has everything you need to find your dream home.
© Copyright 2020
NZME. Publishing Limited
test test test
Man may have been saved twice
21 Mar, 2013 8:08am 3 minutes to read

Labour and its leader David Shearer have had a boost in support in the latest Herald-DigiPoll survey - but it appears to have come at the expense of its potential coalition allies rather than National, which would still be the only party able to form a government on the results.

In the poll of 750 people, just over 36 per cent of voters said they would give Labour their party vote - its best result since December 2010 and a four-point increase since the last Herald-DigiPoll survey in August last year.

However, National's support also lifted slightly, and much of Labour's lift appears to have come at the expense of its potential coalition partners, NZ First and the Greens.

Of parties outside Parliament, the Conservatives were on 1.3 per cent (down 0.1) and the defunct Christian Heritage Party was on 0.2 per cent. Eleven per cent of voters were undecided.

On the poll results, National could again get a majority with the support of either both United Future's Peter Dunne and Act's John Banks, or the Maori Party.

Assuming Act, Mana, Maori Party and United Future hold current electorate seats, the results would give National 61 MPs in a 124-seat Parliament, Labour 46, the Green Party 11, the Maori Party 3, and Mana, United Future and Act one each.

Mr Shearer's ratings as preferred prime minister increased by nearly six points to 18.5 per cent - his highest ranking in the survey so far and an indication he is beginning to get some traction after a reshuffle of his team and contending with speculation about his leadership late last year.

Prime Minister John Key remained well ahead on 63 per cent as preferred prime minister, although there was a three-point drop for Mr Key since August and it is his lowest result in the Herald-Digipoll survey since he became Prime Minister in 2008.

The poll was taken from March 11 to March 17 while the Prime Minister was in South America, the drought was hitting, questions over Novopay continued, and the problems of Solid Energy and pre-registration for Mighty River Power dominated the political headlines.

Key weighs in on Shearer's 'oversight'

Banks gets his revenge on Shearer

The results indicate National has not been overly affected by those issues. There was a slight increase in those who believed the Government was heading in the right direction up one point to 49 per cent, compared with 43 per cent who said it was not. A view that the Government was moving in the right direction was stronger in Auckland - 56.5 per cent of those polled agreed, compared with 45 per cent in the rest of the country.

Since the August poll, Mr Shearer has gone through two confidence votes in his caucus, and disciplined MP David Cunliffe for refusing to rule out a challenge of him. The poll was taken two weeks after Mr Shearer's reshuffle of his team and a period that included the reinstatement of Shane Jones to the front bench after an Auditor-General's report into his handling of the William Yan citizenship case.

It is NZ First's worst result since before the last election. Although the poll is not good news for the centre-left bloc, Labour will get some satisfaction from winning back some of the centre-left vote as the parties battle among themselves to dominate in Opposition.

Labour was inching up in most polls until last month when both One News' Colmar Brunton and 3 News Reid Research polls showed Labour had slipped down two points while National had gone up. A Fairfax Ipsos poll taken a month ago showed Labour had gone up, but by a smaller margin.

On the poll results, National could again get a majority with the support of either both United Future's Peter Dunne and Act's John Banks, or the Maori Party.

The poll of 750 eligible voters had a margin of error of plus or minus 3.6 per cent. 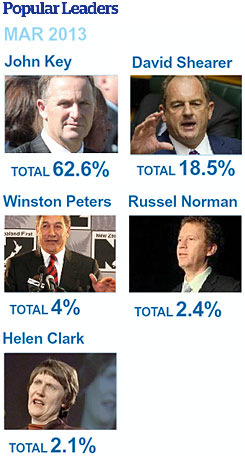 A huge must win jackpot of $50m is up for grabs on Saturday.
NEW ZEALAND