Whether you’re looking to buy or rent, OneRoof.co.nz has everything you need to find your dream home.
© Copyright 2020
NZME. Publishing Limited
University of Canterbury settles quake claim
15 Dec, 2014 4:46pm 2 minutes to read

Auckland Council has undertaken a review of guidelines for methamphetamine-contaminated properties and developed tough new proposals to be implemented next month.

Mervyn Chetty, the council's environmental health manager, said the proposal took a risk-based approach and assessed each case on its merits.

"The risk assessment takes into account the information supplied to council, the activities and chemicals found on the site, whether the site is occupied, if there are any vulnerable people present [eg, children], if there is any obvious contamination present, the type of buildings involved and where on the property the manufacturing or storage of chemicals and equipment was occurring," Chetty said.

If the risk was assessed as high, occupants would be asked move out of the property immediately until the place was fixed.

"If the occupants are unwilling to move out we will seek the assistance of the Auckland Regional Public Health Service to ensure the property is vacated," Chetty said.

"If this order is not complied with, then council will issue a closing order which is enforced through the court system."

As a last resort and if the level of contamination posed a significant health risk to the public then the council would carry out the works and recoup the cost from the owner.

"When council is formally notified by another agency [eg, police] that a property has been used in the manufacture of methamphetamine or where evidence has been provided confirming that there is contamination present, then this information will be placed on the LIM," Chetty said. 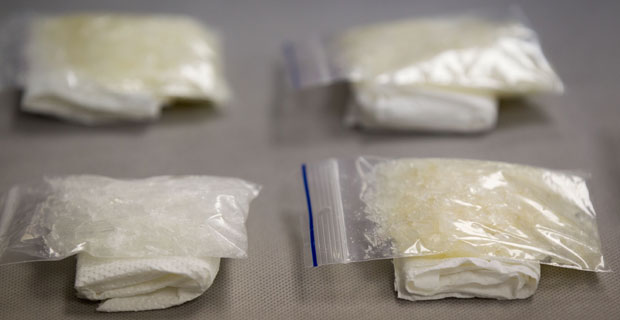 "Likewise, whenever a cleansing order or closing order is issued, these will also appear on the LIM. Once the property is remediated the LIM is updated to reflect this. All this information must remain on the LIM."

Drugs arrest after truck pulled over

In some instances where it was likely that the land had also been contaminated with chemicals then this would also be noted on the LIM, Chetty said.

This was a requirement under the National Environmental Standard as methamphetamine production was listed in the Hazardous Activities & Industries List (HAIL) by the Ministry for the Environment and was required to be placed on the LIM.

Chetty said the council was one of a group pushing for new standards on meth-contaminated properties and this was being considered by Standards NZ.

"Due diligence testing of properties prior to sale and the setting of national standards is a good idea to help protect potential buyers but is outside of council's jurisdiction," he said. "There are a wide range of companies currently offering testing services for methamphetamine at varying cost and quality.

"Council is unable to promote any particular companies used in the testing or remediation of properties and would endorse some sort of national standard or minimum competency level being developed."

The first South Auckland property investor Kerry Burridge knew that her rental was a potential methamphetamine crime scene was an early-morning phone call from police.

"We had an armed offenders squad callout at 4am when all hell broke loose," Burridge said

The place was suspected of being used to store P-lab equipment.

"Levels of reading were too high for smoking but not enough for a P-lab," she explained.

A police spokesman said no drug-related charges were laid in relation to the search warrant executed.

Burridge said tests indicated the entire unit had to be decontaminated before it could be retenanted.

"Curtains, carpets, cupboards were stripped out, then they retested and discovered contamination levels had not come down enough so they took the Gib board off the walls and the ceiling."

Fortunately, Burridge had Tower's landlord extension insurance "for exactly this scenario" so all costs were covered.

"The whole claim was just under $80,000 and the new tenants moved in yesterday," she said last week.

Her policy not only covered the cleaning, strip-out and reinstatement but also the eight months' lost rent at the property, now rented for $300 a week and valued at more than $250,000.

"It's a slow process to go through and very costly," she said.

Burridge is one of several landlords who have had to deal with this country's P epidemic and now the Auckland District Law Society is calling for new regulations to ensure that local authorities take a more consistent approach on properties suspected to be labs.

Commercial and residential landlords, vendors and prospective property purchasers need to be aware of the significant health risks and property damage risks that arise from properties being used as P-labs, the society says.

P-lab testing should become part of the standard due diligence procedures undertaken during a property transaction, although testing methodology could vary, the society said.

The society is also calling for a standardised test for the presence of methamphetamine, saying that for a relatively small investment, buyers can save a lot of cost and heartache to determine whether there is a meth presence.

Call for new standard on meth labs gets support

"We are leading the co-ordination of a private and public sector approach to developing a standard for the sampling, testing and remediation of methamphetamine-contaminated properties," a Local Government spokesperson said.

"The impetus for this came from a small group of councils working with us alongside the police and organisations in the testing, remediation, insurance and property space. The councils working on this directly are Auckland, Hutt City, Wellington, Tauranga, Christchurch and Dunedin."

A scoping workshop was held in September and everyone was supportive of a formal standard being developed to give certainty, Local Government said.

Once funding was secured a standard would be developed, and a steering group had been formed to guide this process, Local Government said.

Keeping up your KiwiSaver contributions a 'no-brainer'

Even in a recession, KiwiSaver is chock-full of sweeteners.