Whether you’re looking to buy or rent, OneRoof.co.nz has everything you need to find your dream home.
© Copyright 2020
NZME. Publishing Limited
test test test
Best viral videos of 2014
17 Dec, 2014 10:32am Quick Read

Russia has lost control of its economy and may be forced to impose Soviet-style exchange controls after "shock and awe" action by the central bank failed to stem the collapse of the rouble.

"The situation is critical," said the central bank's vice-chairman, Sergei Shvetsov. "What is happening is a nightmare that we could not even have imagined a year ago."

The currency crashed to 100 against the euro in the biggest one-day drop since the default crisis in 1998 as capital flight gathered pace, despite a drastic rise in interest rates to 17pc intended to crush speculators and show resolve.

Yields on two-year Russian bonds spiralled to 15.36pc, while credit default swaps are pricing in a one-third chance of a sovereign default. The shares of Russia's biggest lender, Sberbank, fell 18pc.

Neil Shearing, from Capital Economics, said the spectacular failure of the rate shock may bring matters to a head. "If a rise of 650 basis points won't do the job, we are near the end. That means stringent capital controls," he said.

Michal Dybula, from BNP Paribas, said the rouble plunges risk setting off a systemic bank run. "A large-scale run on deposits, once under way, would make capital controls pretty much unavoidable," he said, adding that the authorities may start by forcing state-controlled companies to sell foreign assets and repatriate funds. 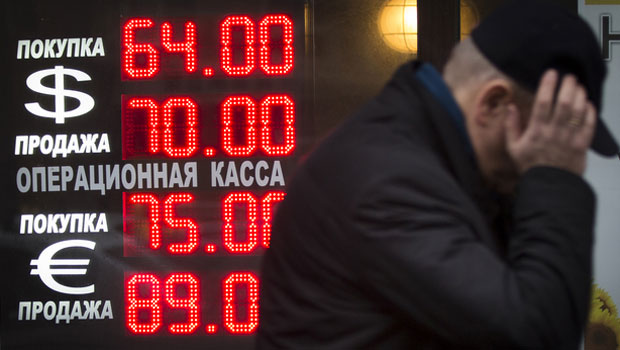 Signs advertising currencies light next to the exchange office in Moscow. Photo / AP

In Washington, the White House said it had no intention of easing pressure on Russia to halt the freefall. "It is president Vladimir Putin's decision to make. The aim is to sharpen the choice that he faces," it said.

President Barack Obama will not veto a law passed by Congress imposing a raft of new sanctions against Russia, even though he warned previously that it goes too far for European leaders and risks splitting the trans-Atlantic front. The measures include $350bn of military assistance to Ukraine, and authorize Mr Obama to impose curbs on energy companies investing in Russia, as well as to prohibit credit to Gazprom.

Sergei Lavrov, Russia's foreign minister, said it is now clear that the US aim is to topple Mr Putin through "regime change" but vowed that the Russian people would rise in defiance. "We have been in much worse situations in our history, and every time we have got out of our fix much stronger," he said.

Russian crisis: Why it matters

After years of bluster and suggestions by Mr Putin that the US is a paper tiger, the Kremlin is now coming face to face with the cataclysmic consequences of what it has done by invading Ukraine and changing Europe's borders by force. By the same token, Washington needs to move with care since it would be a geostrategic miscalculation of the first order to push a nuclear-armed Russia too far into a corner, or to perpetuatue a cycle of grievance. 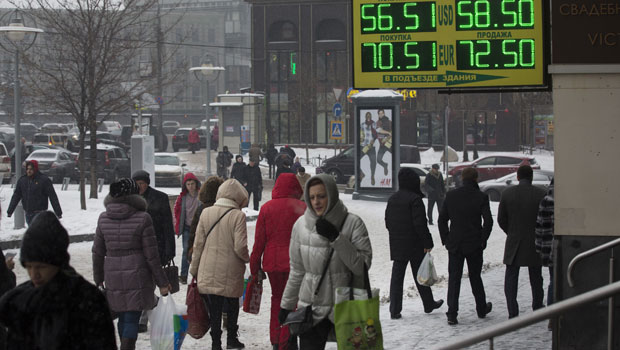 Anthony Peters, from SwissInvest, said Russia's leaders had misled their own people and have until now been in denial about the crisis engulfing them. "Not since Soviet times have we seen such steadfast refusal by the Kremlin to acknowledge the presence of severe political and economic problems while sacrificing the people in the name of orthodoxy. The Russian people are legendarily stoic in the face of hardships but beware if, and when, their patience runs out," he said.

The rouble crash has doubled the cost of servicing nearly $700bn of external debt owed by Russian banks, companies and state bodies, mostly in dollars. They must repay $30bn this month and a further $100bn next year. Oil giant Rosneft has requested $49bn of state aid to weather the crisis.

Traders in Moscow expressed fury at the central bank's refusal to deploy its $416bn of foreign reserves to "turbo-charge" the defence of the rouble, though the authorities may have intervened in late trading. The currency clawed back some ground - to 69 against the dollar - after one of the wildest days of the modern era. Eugene Kogan, from Moscow Partners, said the Russian stock market faces "slow death" over the next six months as liquidity vanishes.

It is clear that the authorities are guarding their reserves jealously after burning through $100bn this year to little avail. BNP's Tatiana Tchembarova said what remains no longer covers external debt, unlike 2008 when there was still ample cover. "In addition to being twice as levered, Russia is entering this crisis with lower reserves," she said.

The government has already committed $143bn in foreign reserve spending for next year. "We think that more will be required to support Russia's banking system," she said. The Kremlin had to spend $170bn rescuing the banks in the 2008-2009 crisis.

Lubomir Mitov, from the Institute of International Finance, said any fall in reserves below $330bn could prove dangerous, given the scale of foreign debt and a confluence of pressures. "It is a perfect storm. Each $10 fall in the price of oil reduces export revenues by some 2pc of GDP. A decline of this magnitude could shift the current account to a 3.5pc deficit," he said. The total "financing gap" could soon reach 10pc of GDP due to the combined effects of capital flight and sanctions.

The central bank knows that Russia's seemingly large reserves are a Maginot Line. Yet its attempt to defend the rouble only by raising rates is itself lethal. Even before the latest move it warned that the economy could contract by 4.7pc next year in a scenario of $60 oil prices.

The slump may now be far worse as a violent monetary squeeze sends tremors through the banking system and sets off a wave of corporate bankruptcies. BNP Paribas said each 100-point rise in rates cuts 0.8pc off GDP a year later. Rates have risen 750 points in a week.

Lars Christensen, from Danske Bank, said the Kremlin's actions have led to the "absolutely worst possible outcome" since the botched move is enough to do grave damage, without solving anything. "They should have let the currency go rather than killing the economy. Investment is in freefall, and I fear this shock is going to be even bigger than in 2008-2009. Nothing suggests that oil is going to rebound quickly this time," he said.

Growth has held up over recent months but this may be an illusion of the crisis itself as people scramble to rid themselves of roubles to buy homes, cars, washing machines or anything that keeps its value. Ikea has seen a surge of orders for new kitchens. This is a one-off effect, and creates a cliff-edge from the economy next year.

The rouble trauma came as premier Dmitry Medvedev held an emergency meeting with economic planners, and rumours swirled of a sweeping purge at the top of Kremlin. Officials denied there were any plans for capital controls after the meeting.

There is no sign yet of relief from the oil markets. Brent crude fell below $59 a barrel on Tuesday for the first time since the depths of the Great Recession in 2009. The fallout from the crisis is already hitting banks linked to Russia and Ukraine. The share price of Austria's Raiffeisen fell 8pc in Vienna. More than 240pc of its tangible equity is exposed to the region. The biggest external lender is France's Societe Generale, with €25bn of exposure, or 62pc of tangible equity.

Contagion is spreading across the emerging market nexus, hitting countries such as Turkey and India that should be beneficiaries of lower oil prices. "There is absolutely no liquidity anywhere. The system is stressed and we have a crunch all over the place," said one hedge fund trader.

There are signs that the sell-off is becoming self-feeding as investors withdraw money from emerging market bond funds, forcing the funds to liquidate holdings into the downturn. In some cases managers are acting tactically, selling "proxies" such as Turkish debt given the difficulty of exiting Russian positions.

The rouble has now fallen 56pc against the dollar over the past year. Russian GDP has shrunk to $1.1 trillion, smaller than the economy of Texas, and half the size of Italy's. The effect has been to double Russia's external debt to at least 70pc of GDP, a high-risk level for rating agencies.

"A Russian downgrade to junk is only a matter or time," said Tim Ash, from Standard Bank.

'That kid can fight': Boxing legend in Joseph Parker's corner

The real factors driving changes in the NZ labour market

COMMENT: Workers themselves must take more ownership for their income security.
ENTERTAINMENT

She remained poker faced after seeing her ex wrapped around the pop star at the Superbowl.