Whether you’re looking to buy or rent, OneRoof.co.nz has everything you need to find your dream home.
© Copyright 2020
NZME. Publishing Limited
test test test
Govt dismisses board member over newsletter
23 Nov, 2016 12:32pm 3 minutes to read

The Government's new plan to get help for obese kids is proving a turn-off to many parents.

First results were reported yesterday on the Raising Healthy Kids target, which aimed to ensure that by the end of next year, 95 per cent of obese preschoolers were referred for help.

The referrals, based on the national check-up on 4-year-olds, are for clinical assessments by health workers, and family-based nutrition, activity and lifestyle interventions.

I don't blame them. It's highly stigmatising - and with no proven benefits

District health boards are well short of 95 per cent, according to the data published today by the Ministry of Health for the six months to August 31. Waitemata scored highest, at 83 per cent, followed by Auckland DHB on 79 per cent, with Bay of Plenty the lowest, at 17 per cent.

However, Waitemata and Auckland officials report that despite the two DHBs' "good progress" on the target, many families offered referral are saying no.

"The decline rate for referral is relatively high - approaching 1 in 5 - and will be an area for future work over the course of 2017."

Diabetes expert Dr Robyn Toomath, author of the book Fat Science, why diets and exercise don't work - and what does, said it was no surprise that nearly 20 per cent of families offered referral were saying no.

"I don't blame them. It's highly stigmatising - and with no proven benefits."

"How they think these poor parents are going to be responsible for keeping their children slim just by having the finger pointed at them I don't know."

She said the kinds of referrals offered under the new target, including courses for parents on behavioural change, advice on nutrition and exercise, sports coaching, and programmes to promote family conversations about health, were unlikely to reduce obesity.

Ramsay: has the tiger become a pussycat?

Instead of educational approaches, she advocates changes to the food "environment" - making healthier choices the default option through policies such as a sugary-drink tax, cuts to sugar in children's foods and restricting junk food in school tuck shops.

"It's an ambitious target but we're committed to making progress.

"It's a difficult issue for many families and changing mindsets will take time."

District health boards' July-September performance.
The target is that by December next year, 95 per cent of children identified as obese in the Before School Check will be referred for clinical assessment and family based nutrition, activity and lifestyle interventions. Source: Ministry of Health. 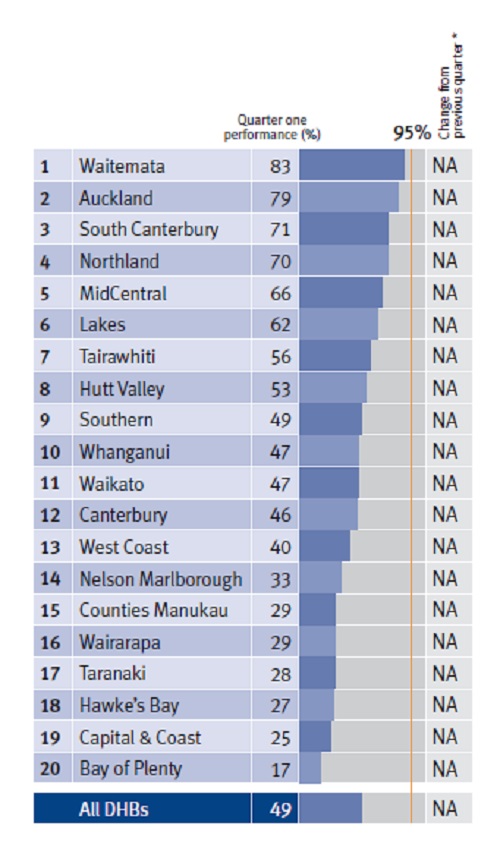 Flatmates charged $160k after Work and Income say they are lovers

They say they're flatmates. Work and Income says they're lovers. Now they owe $160k.
NEW ZEALAND

Kris Faafoi said customers of Travel Globe might have been defrauded.
NEW ZEALAND

Marae-based court will sit in April, a "significant" step to keeping teens out of gangs.