Elements of TV3's gun buying story were contrived as documents show a production manager on the show may be directly implicated in the purchase and delivery of the .22 rifle at the centre of a police inquiry.

There was a furore last week after detectives used a search warrant to access the home of Heather du Plessis Allan, who fronted the story and was shown sitting at a desk, apparently filling in the Gun City mail order form.

TV3's owner MediaWorks has stood by the show, saying it was in the "public interest" to expose a "flaw in the mail order gun system".

No one has been able to point to a single instance where a gun has been gained illegitimately through the mail order system. It was also later revealed the rifle was bought using the manufactured identity of a police officer, required by law to authorise and approve the mail order form.

An apparently fake gun licence number was also used but turned out to be genuine when checked by Gun City.

During broadcast of the story, du Plessis-Allan was shown holding a piece of paper to the camera saying: "Normally you take this form down to the police station along with your firearms licence. The police officer checks that you actually do have a firearms licence and signs at the bottom of the form. We can tell you we didn't take the form to a police station."

In the wake of an outcry over the search, police put out a press release saying TV3 staff would not be interviewed so detectives took "steps necessary to obtain the information required to progress the investigation".

"They asked me for the original mail order form - I handed it over. They never asked me for my handwriting samples and know that had they done it, I would have handed them over."

The Herald has studied the copy of the mail order form used to buy the rifle from Gun City and compared it to the form shown in the broadcast on October 21. The documents are different - the "B" in "bolt", the "R" in "rifle" and the "AC" in "action" most strikingly so.

It means detectives were confronted with the possibility of more documentation other than that which was used to purchase the weapon.

The existence of two forms would compel detectives investigating the gun buy to search for other documentation, according to Criminal Bar Association president and former police detective Tony Bouchier.

Hover your mouse over the form to see the story behind the document. 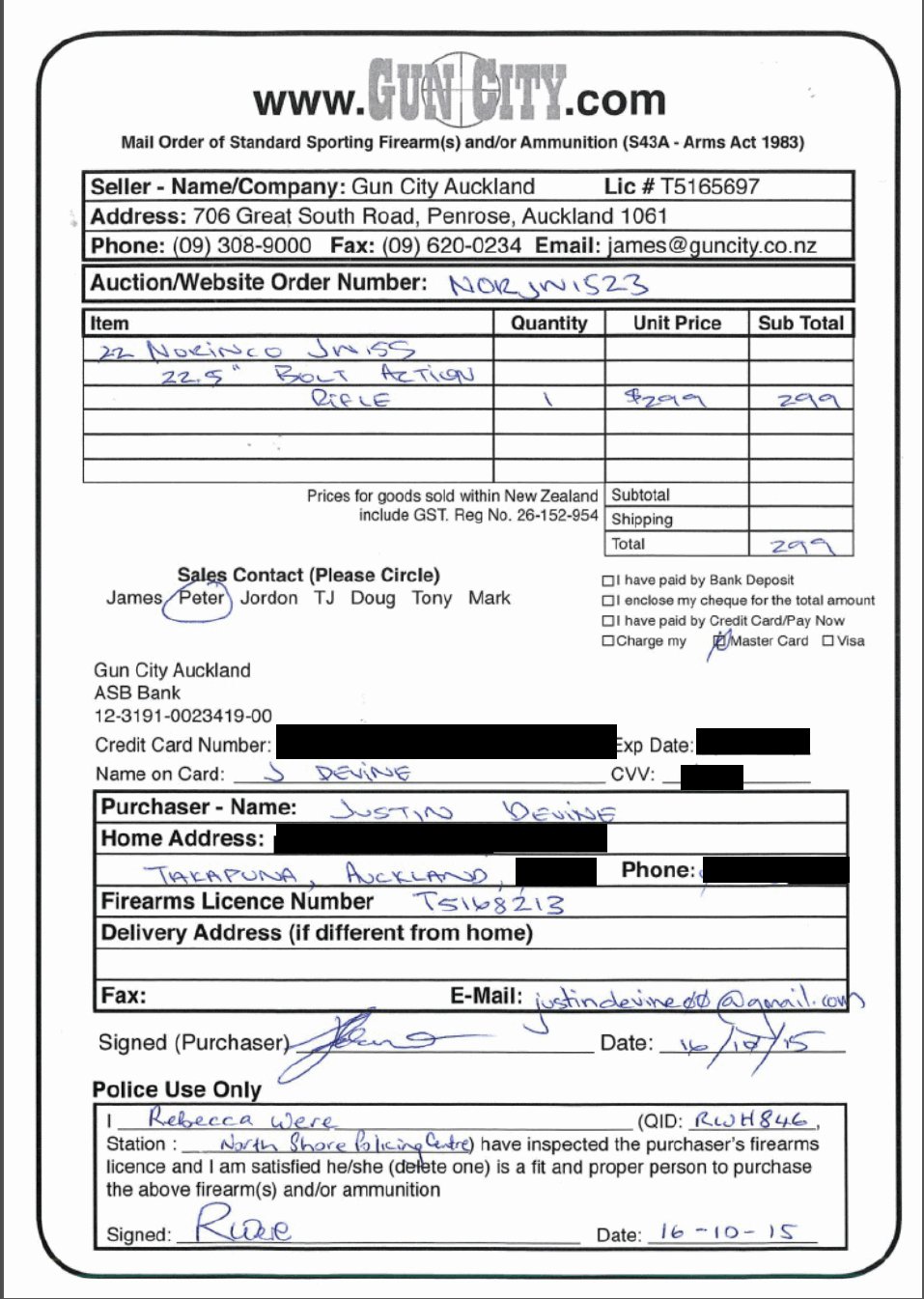 He said if there were two documents, officers would want both and it could have spurred the search of du Plessis-Allan's home.

"Probably one corroborates the other. I would imagine they would want to connect the dots."

The single reference to the "original mail order form" by du Plessis-Allan has been the only comment about the documentation used to buy the rifle. Both Story hosts have spoken repeatedly of the search being to obtain handwriting samples, referring to police "looking for handwriting samples".

There has been no reference to the second part of the search warrant - of which the Herald has a copy - and its second stated objective. The warrant specifically seeks "all copies of the Gun City mail/online order form, or other sheets of paper that have Justin Devine's signature on it," referencing a copy of the actual order form used to buy the weapon and the false name adopted for the purchase.

Story's production manager is Jayne Devine, according to her LinkedIn page. The address on the Gun City mail order form to which the rifle was delivered has been matched by the Herald with Ms Devine's home address.

Police officers have searched the apartment of TV3's Heather du Plessis-Allan as part of an investigation into the unlicensed purchase of a rifle, according to her husband Barry Soper.

Handwriting analyst Mike Maran said there appeared to be two different styles of handwriting on the mail order form and both had clear differences to du Plessis-Allan's script.

He said the difference in the word and letter spacing, the style of capital letters and the width of letters in the middle of the words was different.

"Some similarities do exist, but these could be coincidental," he said. The similarities include the slant, patterns of pen pressure, the way the letter "E" was written and the "pen lifts" which gave writing a "pictorial" appearance.

Police have said they are investigating forgery and "obtaining by deception" charges, crimes carrying maximum sentences of 10 years and seven years respectively.

Mr Bouchier, a criminal defence lawyer, said it would be difficult for detectives to point to the "criminal intent" behind the purchase of the gun.

He said those behind it might face a range of possible charges but asked whether the show had exposed a "flaw in the system".

"If Heather du Plessis Allan can do it then there's criminal minds out there who spend their entire working life trying to work out how to rort the system."

Police have since changed the mail order system for gun purchases.

A MediaWorks spokeswoman said there would be no comment while the police investigation was underway, other than Mr Weldon's comment, and the company stood by the story.

A police spokeswoman would not comment on the inquiry.

The story so far

• Early Oct: Duncan Garner interviews Police Association president Greg O'Connor who talks about the ease of gaining firearms by mail order.
• Oct 16: An order is placed for a .22 rifle by someone connected with TV3's Story.
• Oct 21: Story broadcasts its exploit as police begin an investigation.
• Nov 24: Police gain search warrants for Heather du Plessis-Allan's home and TV3's Auckland office.
• Late Nov: A warrant is used to have TV3 produce documents. Du Plessis-Allan says the "original" mail order form is handed over.
• Dec 1: The warrant on du Plessis-Allan's home is used to search for copies of the form.
• Dec 2: Police issue a statement saying illegally purchasing a gun by deception is an offence "punishable by imprisonment".

The person is believed to be seriously injured.
NEW ZEALAND