Whether you’re looking to buy or rent, OneRoof.co.nz has everything you need to find your dream home.
© Copyright 2020
NZME. Publishing Limited
test test test
Man jailed for attempting to violate tourist
26 Nov, 2014 11:50am 3 minutes to read

The German entrepreneur and failed politician has revealed this week that his three-year, $10 million legal fight against extradition to the US to face trial on an alleged conspiracy to commit the biggest-ever breach of copyright has seen him run out of cash.

A high profile Queen's Counsel and one of the country's biggest law firms stepped down from his legal team team earlier this month.

"The US Government has taken all my assets up until the raid in all jurisdictions and after I invested money into the internet Party, the MPAA (Motion Picture Association of America) sued me civilly to try to seize those assets too, so I'm officially broke right now," Dotcom said via live video-link from his Coatesville mansion at the Unbound Digital conference in London yesterday.

"As of today, I don't have a single share in Mega - it's all held in trust by my wife and my five children."

Dotcom also spoke out of his regrets at not having taken the threat of copyright law and the power of the MPAA "seriously enough". "I thought that due to court decisions we were monitoring from our competitors like RapidShare who did exactly what we did and were winning in civil court proceedings, and YouTube was winning against Viacom - our sense was that we were protected by the DMCA law (Digital Millennium Copyright Act)," he said.

"We never for a minute thought that anyone would bring any criminal actions against us. We had in-house legal counsel, we had three outside firms working for us who reviewed our sites, and not once had any of them mentioned any form of legal risk, so I wish I had known that there was a risk." 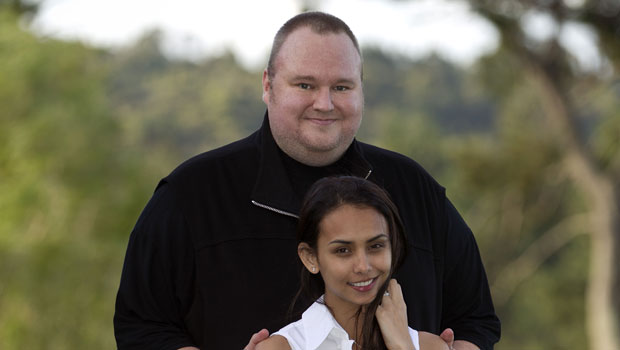 He also regretted his foray into politics with the internet Party flop in the September general election.

The "battle is quite exhausting", he said. Dotcom also said he was "unfairly persecuted" in the New Zealand media because of his political moves.

"I engaged politically to try to change things and that, unfortunately, backfired," he said.

"Before I started my political movement, I was quite popular in New Zealand. Everyone was cheering for me to win my case, but after I got involved in politics and the Prime Minister and his party attacked me viciously, labelling me as a Nazi and saying I'm only going into politics to stop my extradition, well the New Zealand public heard that narrative and now I'm a pariah.

"The witch-hunt worked, everyone wants to see me burn, and on Thursday I might go to jail because of that."

Dotcom has been on bail since February 2012.

But last week his bail conditions were tightened, preventing him from using helicopters, travelling by boat or going more than 80km from his Coatesville mansion.

A hearing to decide whether he breached his bail conditions will be heard tomorrow at Auckland District Court.

"I'm an easy target because of my flamboyance," he told the Unbound Digital conference.

"When you travel around on private jets and you go around with cars that have number plates saying 'God', 'Stoned' and 'Mafia' on them, it's probably not the best for keeping a low profile.

"Make sure you send me some cards in appreciation for what I'm trying to do - if I go back to jail, send me a photo of a cat."

Residents reported hearing a "huge blast" as a power line fell in the rain outside.
NEW ZEALAND

COMMENT: Labour memo cited Todd Muller as a threat. Today, not so much.