New Zealand businesses are planning a "fighting fund" for a pro-TPP campaign once a deal is finished and in the public arena, Prime Minister John Key was told in Beijing yesterday.

Sir Graeme made mention of the street protests against TPP around New Zealand on Saturday.

"What we saw in the weekend on TPP, we have to engage like it or not," he said. "So we in business will be there to help and we will put our hands in our pocket as well for a fighting fund because it is really necessary."

He said that he saw some "inward thinking" during the election campaign.

"We always know it is going to come from Winston [Peters]. But it was a bit broader and we need to counter that."

Later Sir Graeme said he was concerned that the public did not understand the benefits of TPP or the free trade agreement New Zealand had with China.

He said he wanted to put the facts on the table "rather than things that appeal to people's gut instincts but aren't backed by facts".

"We depend on trade so we have to do everything that makes us competitive."

His own company was 90 per cent dependent and employed many staff - more than 3000.

Fran O'Sullivan: Groser will walk a tightrope in Beijing

Key, Obama to press Japan on trade accord

He said the pro-TPP campaign and debate should begin after a deal was complete.

Mr Key and leaders of other countries in the Trans Pacific Partnership were due to attend a meeting in Beijing by United States President Barack Obama in a bid to improve the quality of TPP, particularly in reference to Japan's offers.

Mr Key said the low growth in Japan backed the case for TPP because it needed great integration in the region and great access to markets to remain a strong economy.

Mr Key said Mr Obama had a window of opportunity - about six months - to close a deal. 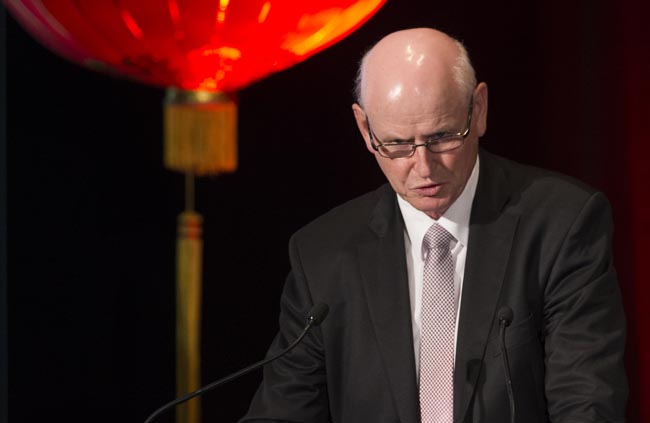 Graeme Harrison said he was concerned that the public did not understand the benefits of TPP or the free trade agreement New Zealand had with China.

"Either we grab it with both hands or TPP will be on a slower track. It doesn't mean it can't happen but it is less likely to be under his watch."

New Zealand is considering putting over $100 million start-up capital into a new China-inspired Asia infrastructure bank that is being strenuously opposed by the United States and its allies in the region.

It is one of the big power-plays going on behind the scenes at Apec in Beijing and Prime Minister John Key is expected to have discussions about it with various leaders on the sidelines and with President Xi Jinping in New Zealand next week.

"We have been engaging in discussions," Mr Key told the Herald.

"We believe it is important for New Zealand to be involved on the ground floor and to have some influence over the structure over the organisation.

"If they build a lot of infrastructure in the region, New Zealand companies would almost certainly get a slice of that."

The Cabinet is likely to make a decision by the end of the year.

At the height of New Zealand's election campaign, 21 countries met in Beijing to sign a memorandum of understanding about the bank, to be called the Asia Infrastructure Investment Bank.

New Zealand wasn't involved because it clashed with the election.

But the United States, Australia, Japan and South Korea have opted out, citing an unsatisfactory structure because it would be 50 per cent owned by China.

It would also be rival to the World Bank and is seen as a move by China to assert regional leadership.

Mr Key acknowledged the Treasury supported the idea. India and Singapore are in as well.

It is thought New Zealand could be required to commit itself to about $600 million in uncalled capital.

For more from Audrey Young in Beijing click here.

Flights diverted from Wellington as low cloud shrouds the airport

At least eight flights have been diverted.
NEW ZEALAND

Shark spotted in the shallows at Pāpāmoa beach

The shark was about 1.5 metres long!