It's a potential health hazard that comes complete with rotting floorboards, nicotine-caked walls and the worst bathroom the listing agent has ever seen.

But dozens of potential buyers have viewed this badly rundown "do-up" in upmarket Grey Lynn which is expected to fetch $1 million at auction.

Interactive: Scroll to end of article to see what your home is worth

The late-1800s two-bedroom settler's cottage at 2 Leighton St is being touted as "the worst house in the best suburb", but it's not for the faint of heart.

With its threadbare carpets, sagging ceiling, filthy lino and mould-crusted bedroom ceilings, DIY lovers need both vision and imagination - not to mention courage.

The deceased estate has a 2011 valuation of $690,000, almost all of which is for its 381sq m of land. Real Estate Institute figures show the median sale price last month for the fashionable Grey Lynn postcode was $1,067,500.

The first thing that hits you as you enter the front door is a sour and distasteful odour no home should ever emit.

"This is the worst house I've ever sold," admits Barfoot & Thompson agent Kirk Vogel. "But this house has got a story. There's a lot to be said for a house having a soul and a story." 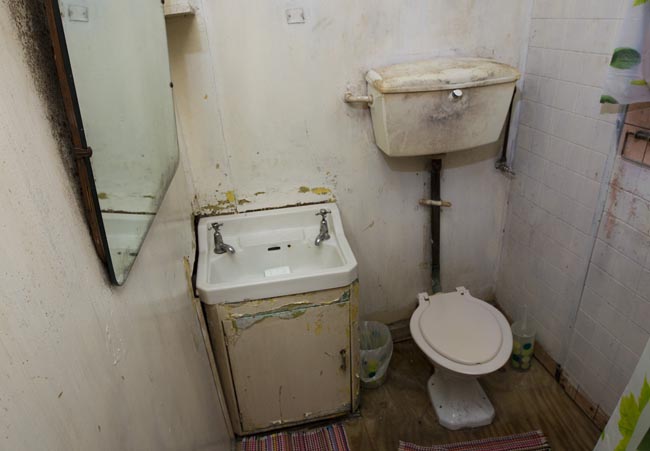 The freehold property has no electricity or running water. Though a rusting gas oven sits marooned in the filthy kitchen, family members who lived there until a few weeks ago are likely to have cooked on a fire pit in the backyard. The bathroom - the worst Mr Vogel has ever seen - is severely rusted, with flaking roof paint and stained tiles. The less said about the toilet the better. The kitchen has a cracked Formica bench, what look like rodent droppings, and spongy, sagging floorboards. The lounge walls are stained yellow with years of nicotine build-up, and weeds spill from the outside guttering.

About 45 people have viewed the property since it was listed two weeks ago, though Mr Vogel admits he's had an "average response" and is not sure if he's found his buyer yet. "I never say never. It's got to go, it's got to sell. Somebody who turns up will end up buying it."

Mr Vogel expects the new owner to bowl the 71sq m weatherboard house and replace it with something a bit more user-friendly.

Marketing material declares the character home "has seen better days", with years of deferred maintenance and the elements taking their toll. "There's more to do here than just a paint and paper, the kitchen is well past its best and the holes in the floor provide great natural air conditioning for the summer months."

However, "rare like the unicorn", it represents a unique opportunity for the right buyer.

The elevated section of "delectable dirt" is dotted with wild flowers and offers views of the Waitakere Ranges. It is just 440m from Ponsonby Rd and in zone for both Richmond Rd and Ponsonby Intermediate schools.

Council zoning means the new owner would need resource consent to demolish or redevelop, and any work on the property must be in keeping with the rest of the street.

It will go under the hammer on October 8.

App users: Tap the link below to view the interactive graphic

Liam Dann: NZ economy will muddle through - but at what cost?

New Zealand is on track to muddle through another crisis, perhaps that's the Kiwi way.
ENTERTAINMENT | Spy

Australian comic superstar Magda Szubanski has been left on the cutting room floor.