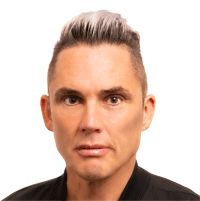 With the postponement of We Will Rock You and the financial crisis that ensued, Act Three Productions could have easily curled up and died. Instead, they have doubled down and produced an absolute banger that had us smiling under our masks as we exited the building.

Often, and indeed lately, a musical gets through because we love the songs and don't actually care what happens between them. Sale brings a wealth of musical theatre experience, and her comic timing, artistic flair and eye for detail are evident consistently throughout. A Joanne Sale-helmed musical will always carry her signature, something seriously lacking in the shows of other paint-by-numbers directors.

Sale's job is made easier by the use of an ingenious, locally made set, designed by Jen Lambert. Its simple capsule nature, combined with the tightly zoned lighting by Samantha Peters, makes the technical side of things as interesting as the cast performing on and around it. Sale's scene changes are like a character in themselves as we watch the mechanics of good design unfold before our eyes, instead of being left in the dark.

Jessie Feyen absolutely smashes the role of Elle Woods. Originally written for the screen as a vehicle for Reese Witherspoon, Woods is actually a well-written character who, while not doing anything for the feminist movement, definitely blows away the dumb blonde stereotype. I've always said Feyen is a generous performer and here she performs a master class in embodying a character, while allowing an ensemble to shine. After a trifecta of important blondes, Audrey in Little Shop of Horrors, and Velma Kelly in Chicago, I'd love to see her shift gears and do something serious.

They say an actor should never share a stage with children or animals, for fear of being upstaged. Here that warning should be upgraded to: Never share the stage with dogs, UPS drivers, or Clare Lees-Galloway. I won't go into too much detail on the UPS driver, as this character (played by Nikora Lewis) must be seen to be believed. The dogs I speak of are Pickles and Ollie who perform so well even this hardy dog hater thought for one moment that canines did, indeed, have a purpose on this earth.

Lees-Galloway, in her debut performance as Paulette, wins us over immediately with impressive characterisation, a beautiful voice and the ability to pare back the character when the temptation to go over the top would have been hard to resist in the hands of a lesser actor.

When I'd read a team of three was leading the choreography, I feared styles would clash, and it would lack focus. This is not the case as Alex Hughes, Ruby Jamieson and Cara Hesselin produce some energetic sequences, although at times there are too many people on the stage. The prison routine is the definitive highlight with Hughes leading, and killing it behind bars again, as she did earlier this year in Chicago.

The best thing about a musical with forgettable music is I will never have to insult my ears with a track like Gay and European again. Where the musical does so well in not perpetrating the dumb blonde cliche, it does little for homosexuals except paint them thinly with a derogatory brush. This aside, Sale, working with what she had, has produced an extraordinary silk purse. Long may she reign.

Health support when you need it

TJ's dialling up a bright future