Whether you’re looking to buy or rent, OneRoof.co.nz has everything you need to find your dream home.
© Copyright 2020
NZME. Publishing Limited
test test test
Channing Tatum - from stripping to stardom
29 Jan, 2015 12:30pm 8 minutes to read

Johnny Depp used to be so cool. Back at the dawn of this new century, it was hard to imagine anyone much cooler. He may not have had a big blockbuster to his name, but he was a star nonetheless, gracing offbeat roles that made him edgier and more enigmatic than Leo or Brad. He was the grunge movie star: Soulful eyes under dirty hair, tattoos before they were mainstream, combat boots on the red carpet, and incredibly bad-ass girlfriends (Winona Ryder, Kate Moss). The more he resisted the attempts to make him a heartthrob, the hotter he became.

So how exactly did we end up here?

You've probably seen Depp's face on the movie posters for Mortdecai. They're inescapable. Here once again is the shape-shifting star, this time flamboyantly mustachioed and dandified by a cravat and velvet blazer with pocket square. He looks at once surprised and utterly pleased with himself, though it's hard to imagine why: The dated-looking farce about a bumbling secret agent has box office prognosticators anticipating a bomb in the making, likely to open to lower receipts this weekend than even Jennifer Lopez's laughable thriller, The Boy Next Door.

"This is comfortably the actor's worst film since Alice in Wonderland, and even dedicated fans will find their hearts shrivelling up like week-old party balloons at its all-pervading air of clenched desperation," says the Telegraph. And Variety warns: "Depp has entered a realm of performance so self-amused, one imagines most co-stars would struggle to forge chemistry with him."

Even the most insouciant bad boys need to grow up eventually. But how did he turn into this 51-year-old ham? Is this what a mid-life crisis looks like? 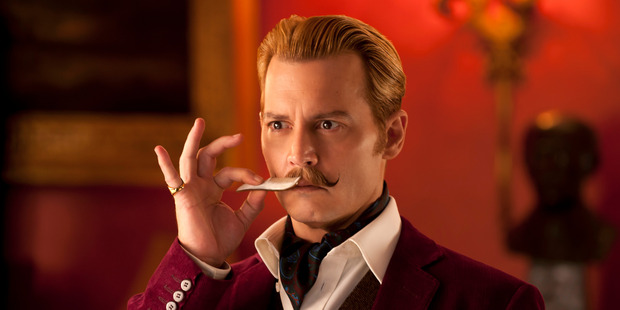 It's not just that Depp is playing an outlandish character. He's essentially made a career out of playing eccentrics. After the '80s TV series 21 Jump Street launched him to fame, he quickly broke out of the heartthrob rut, first by sending up his own pretty-boy-rebel image in 1990's Cry-Baby, courtesy of the pope of trash himself, John Waters. And then there was the first of many collaborations with Tim Burton, in Edward Scissorhands, a bizarre gothic romantic fantasy. Depp's face was ghostly white and scarred, his hair was matted and unruly and he was nearly mute, but his character was so sweet and sympathetic, you still hoped against reason that he'd get the girl (played by Ryder).

Depp continued to disappear into characters, and they were rarely glamorous. He was the mentally not-all-there guy who romanced the mentally not-all-there girl in Benny and Joon and the cross-dressing director in Ed Wood; he collaborated with Jim Jarmusch - patron saint of idiosyncratic indies - playing an accountant in the surreal black-and-white western Dead Man, and he took the role of a psychiatric patient convinced he's the world's greatest lover in Don Juan DeMarco. Critics called his performances "soulful" and "startling."

Meanwhile, he turned down the mainstream stuff. The A-list offers certainly poured in: Titanic and Legends of the Fall, Interview With a Vampire and Speed. And the answer was always no.

Depp's alternatives weren't all winners. The '90s were a mixed bag, but even misses like the thriller Nick of Time took risks. The movie unfolded in real time, a 90-minute race against the clock during which Depp's character had to save his daughter. And for every horrific misfire (ahem, The Astronaut's Wife), there was a Donnie Brasco. In Mike Newell's 1997 crime drama, Depp played an uncharacteristically average guy, an undercover agent tasked with getting close to a mafia hitman, and Depp held his own opposite Al Pacino.

Movie review: Into the Woods

Around this time, Depp met French singer-model-actress Vanessa Paradis, and everything seemed to be clicking. Of course Depp and Paradis would get together. Neither seemed to ever work hard at their craft or beauty, it was just effortlessly there. And obviously they didn't get married. Something so traditional? Mon dieu! Instead, the pair had a daughter and a son and split their time between France and the U.S. When they walked the red carpet, the couple was always perfectly unconventional, him, festooned with all those rings and necklaces, and her looking like a flapper or something.

And then he became a superstar.

Johnny Depp in Pirates of the Caribbean.

For all his devoted fans, Depp had never been a true A-lister commanding tens of millions per picture - not with his offbeat choices. But that all changed in 2003 when he signed onto his first big blockbuster. The movie was Pirates of the Caribbean: The Curse of the Black Pearl, based on a Disney ride, and Depp played Captain Jack Sparrow. He justified taking the part in various ways, - it was a movie his kids could see, it was a challenge to inject so much weirdness into a lightweight role. He brilliantly channeled Keith Richards for the role - shambling and slurring with a Cockney accent - though the eyeliner, dreadlocks and goatee beads were all Depp's ideas (much to the chagrin of terrified Disney execs). The movie was a huge hit with moviegoers and also, surprisingly, the Academy. The role got him his first Oscar nomination.

Suddenly, the actor who was once too cool for mainstream had become a Hollywood commodity, who gamely starred in three Pirates sequels (with a fourth planned for 2017). But he continued to track down quality work and even landed two more Oscar nominations for playing more strange men. In 2004's Finding Neverland, he was Peter Pan author J.M. Barrie, and in 2007, he sang and danced as the murderous barber Sweeney Todd.

But since Sweeney - incidentally, around the time he became a sequel guy - Depp has entered a new stage. Now every role is Sparrow-level over-the-top, fancy facades with little below the surface. And he doesn't so much disappear into a role as completely disguise himself. He was an alarmingly soft-spoken Willy Wonka with a pageboy haircut in Charlie and the Chocolate Factory and an orange-curled Mad Hatter in the critically-pummeled Alice in Wonderland. Both of those were Burton collabs, as was Dark Shadows, in 2012, another dud. Then there was Depp's portrayal of Tonto, sporting a stuffed crow on his head, in the massive bomb The Lone Ranger, directed by Pirates helmer Gore Verbinski. For last year's box-office stinker, Transcendence, Depp was rendered into mere pixels. But his few forays into realism have been similarly unsuccessful. Remember The Tourist, his thriller opposite Angelina Jolie? If so, you're in rare company.

Is Depp's mere presence in a movie enough to secure big box office returns? The answer certainly seems to be no. Alice and Charlie did well, as kid's movies do, and so has the Pirates franchise, although domestically, there appears to be waning interest. The second installment made $423 million stateside, while the fourth did $241 million worth of sales. (Internationally, they continue to be a big hit.) But all the other recent movies fizzled.

Depp was at his best when he was doing the more understated work. Sure, Edward Scissorhands looked flamboyant, but for all the scars and hair and bladed digits, he was playing a strangely relatable character, an outsider in a cookie-cutter world: The emotions were real. There's none of that in what Depp does now, which is, essentially, chew the scenery.

This was his downfall: Hollywood deemed him a moneymaker, and he responded by becoming an ever more manic version of the role that made him big. Problem is, Depp was never really a moneymaker, and he still isn't. Once upon a time, he might have been able to fall back on his punk-rock cred and his actorly integrity. He could have turned his back on it all, with his arm around his latest, beyond-hip girlfriend.

It's not Paradis anymore, by the way. They split in 2012 after 14 non-married years together. Now he doesn't even have a girlfriend. He has a fiancee, the blonde bombshell actress Amber Heard, who is 28. How conventional.

Auckland City Mission has some high profile support for its centenary.