Sola Rosa are known for their star collaborations and genre mixing, and their latest album lives up to that reputation. Magnetics launches with a synth beat on Inspired followed by the smooth R&B vocals of Noah Slee, who also features on the album's toe-tapping single Can We Get It Together and Young the Giant, which mixes a Latin flavour with reggae-style lyrics.

Following in the vein of 2012's Low and Behold, High and Beyond, every track of Magnetics features a new singer and a new sound, keeping each song fresh and interesting. British singer Tawiah's accent comes through perfectly on Right On Time, mixing soulfully with the track's chilled down-beats. Roots and Culture blends hip-hop with reggae-dub, teamed with a lyrical placement on the bridge that turns the song into a dark-sounding nursery rhyme.

Never Too Far and Get Your Move Gone both have the ability to get stuck in your head, while Too Long In the Sun sees the return of Olivier Daysoul and Both Of Us brings in gospel harmonies over heavy synth.

Sola Rosa's Magnetics is solid - a great album to have on repeat at the back-yard barbecue this summer. 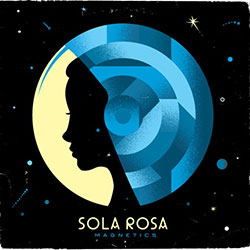 Verdict: Bring on the summer vibes

How Auckland startup nabbed millions in the age of Covid

Sideswipe: You had one job