Whether you’re looking to buy or rent, OneRoof.co.nz has everything you need to find your dream home.
© Copyright 2020
NZME. Publishing Limited
Accused of $129m fraud: Citizen Yan, the man with many names
11 Oct, 2014 12:39pm 11 minutes to read

Since children are the future, and no one over 21 really knows what they find "cool," researchers have devoted many, many surveys to the exact quantification of what it is #teens do online.

In May 2013, they were fleeing Facebook's "drama." A year later, they flocked back to the network like lil' lost sheep.

Now, a pretty dramatic new report out from Piper Jaffray - an investment bank with a sizable research arm - rules that the kids are over Facebook once and for all, having fled Mark Zuckerberg's parent-flooded shores for the more forgiving embraces of Twitter and Instagram. Between fall 2014 and spring 2014, when Piper Jaffray last conducted this survey, Facebook use among teenagers aged 13 to 19 plummeted from 72 percent to 45 percent. In other words, less than half of the teenagers surveyed said "yes" when asked if they use Facebook. (A note: There's no spring data available for the "no networks" option, which is why that spot is blank.)

Surveys of this type are, of course, a dime a dozen, and teen whims are as volatile as Twitter's trending hashtags. That said, Piper Jaffray's research is pretty thorough: It surveyed a national group of 7,200 students and accounted for variables like gender and household income.

Among the survey's other findings: Kids love Apple products above any other consumer tech brand, though only a sliver - 16 percent - were interested in the iWatch. 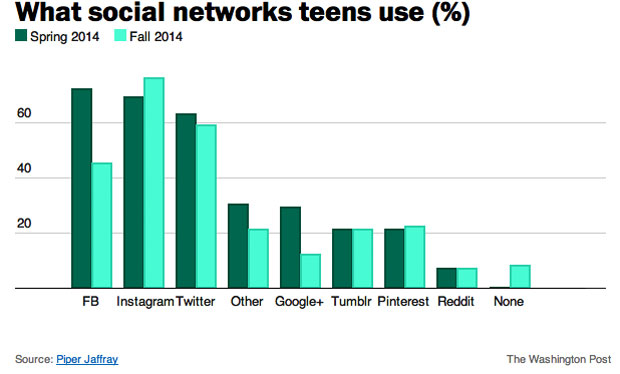 They overwhelmingly predicted that, by 2019, they'd watch all their movies on Netflix. They're cooling on Pandora radio, which has seen a host of streaming apps and other competitors crop up in the past five years.

Alas, none of this helps explain why teens like the things they do, a question as old and impenetrable as time. Both research and anecdote would suggest, of course, that it has something to do with the presence of adults on the site, as well as the typically high-school plagues of oversharing and in-fighting.

The recent rise of anonymous social apps - things like Whisper and Yik Yak, which is dominated by college students - would also seem to suggest a youthful wish to escape the confines and responsibilities of a fixed online identity. (Facebook certainly seems to worry that's the case: On Tuesday The New York Times reported that the Web site was working on an anonymous, stand-alone messaging app of its own.)

That should perhaps worry parents, of both the helicopter and cool-Dad variety: You can't really interact with - or "check up on" - your kids on Whisper the way you do on ye olde FB. (Whisper users don't have friends and go on under pseudonymous usernames, which, arguably, is the app's main draw.)

Facebook needn't panic, though. Even if its namesake platform is now totally passe, the kids still love Instagram - so Zuck wins, either way.

They are barely out of high school – but already raking in the big bucks.
BUSINESS

Two questions for investors swept up in optimism

Few have paused to assess the effectiveness of each dollar, euro and pound expended.
BUSINESS

Synlait has argued the restrictions the covenants impose are unjustified