I have moved between the general roll and Māori roll as is my right due to whakapapa, writes Rob Rattenbury. Photo / Bevan Conley 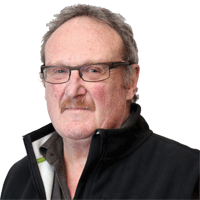 Should 16-year-olds be allowed to vote and why cannot Māori move between the general roll and the Māori roll as they wish, instead of every five years as it has been since 1993?

Easy questions I would think.

Why then do we have to have a Bill debated in our Parliament about this? Green MP Gohlriz Ghahraman's Electoral Amendment Bill pushing for changes to some electoral law is at present sitting before Parliament after being drawn from the ballot biscuit tin for consideration.

This is some sort of raffle that MPs who are not Ministers get to take part in with Bills of personal interest to them.

Theoretically, the Bills go into a "Biscuit Tin" and one or two are drawn every so often. Ghahraman was successful with her Bill.

Now, I simply do not get the Green Party, far too serious and schoolteacher-like for me.

They always seem to be telling us all off. However, now and again something pops up out of their little corner of Parliament that makes sense.

Ghahraman's bill makes perfect sense to me. Sixteen-year-olds are old enough and mature enough to vote, in my view.

Currently, young New Zealanders at the age of 16, can, among other things:

Rob Rattenbury: Broadcasting has changed but it's still the same

Rob Rattenbury: Pākehā need to be trusted with referendum on He Puapua

• Hold a learner driver's licence.
• Leave school.
• Leave home permanently without permission.
• Be paid at least the minimum wage.
• Consent in writing to having their name changed.
• Get a passport without parental consent.
• Have consenting sex.
• Apply for a firearm's licence.
• Marry with consent.

At 17, just 12 months older but still too young by today's rules to vote, they can join our military and, theoretically, fight for our country.

That's silly in two ways; of course, they are far too young to fight a war and yet cannot be trusted to vote either, really.

We will let them go to war but they have no say about who runs the country they are fighting for.

Some say that 16-year-olds are not mature enough to make serious decisions such as who their preferred MP or political party is.

They can do all of the above, most of it a lot more serious than ticking a box in an election.

Some say that they will be swayed by their parents' political beliefs.

Most 16-year-olds I have known were very independent thinkers, but so what if they choose to follow their family's political beliefs, it's their choice.

Some say they are too immature. Yes, there will be some who are immature.

But I would suggest immaturity is not exclusive to 16-year-olds.

It seems to seep throughout the age ranges in our society.

Immaturity does not bar one from voting; voting is for everyone of a certain age in New Zealand, regardless of maturity, at present.

Some would say, perhaps cynically, that it suits the Green Party to have 16-year-old voters as the young tend to find many Green policies attractive.

Of course they do. Being young, many are progressive and aspirational, they want a better, fairer society. It's their future we are talking about here.

It is also crazy that people of Māori descent have to wait every five years to move rolls.

Who thought up that idea? The last time I looked, Māori were pretty switched on about politics.

Why do they need to be prevented through some form of paternalism from exercising their franchise as they wish?

I could assume it is just all too much work for the beavers at the Electoral Commission to be bothered with; all those names swapping as they wish, shouldn't be allowed.

I have moved between the rolls once as is my right due to whakapapa.

I may want to do it again one day. That Te Pāti Māori brings a certain edge, and certainly some colour with their potae, to our boring Parliament.

When they are there, you know it. I have voted for them before, I may wish to again one day.

But I have to wait at present for the right time, time older voters may not have.

That is simply not fair.

Māori do not need their hands held, never have. Under our law at present, all franchised Māori have a choice of rolls.

They do not have the right to exercise that choice as they may wish.

At its best, that is paternalistic, at its worst it's racist.

Our society has reached a level of maturity that we can trust 16-year-olds to vote and just let Māori get on with it for goodness' sake.