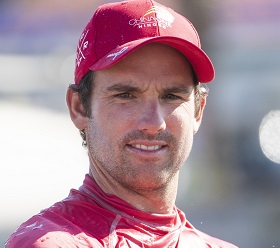 The capsize of American Magic's Patriot could end up being what ignites their America's Cup campaign.

The 10-day turnaround would've been tough and there's no telling the extent of improvements they were able to make to their patched-up boat, but there's nothing like a bit of adversity to push a team to another level.

Before that dramatic day, American Magic were making a lot of mistakes. There were plenty of areas they needed to improve.

So, when Patriot tipped and almost sunk on the Waitematā Harbour, the Americans got a shake-up.

They don't have time to fluff around any more; it's do or die.

We need only look at Ineos Team UK's turnaround to have faith in an American Magic comeback.

The Brits had their pants pulled down in the America's Cup World Series yet turned things around so dramatically they secured a spot in the Prada Cup final with a clean sweep through the round robins.

When it comes to the American sailors, don't expect them to be reluctant in pushing the boat either.

Of course, they'll have been a little shaken up at the time, but it wouldn't have changed their mental approach.

Magic act: Touching tribute as Americans finally get back on the foils

Ben Ainslie: We know how fortunate we are to be in NZ

'One hell of a story': Inside American Magic's whirlwind 10 days

Capsizing isn't abnormal for sailors, they're safe in their cockpits and, in all honesty, it might've been a bit of fun.

The only part of this "setback" for American Magic that might cause issues is whether 10 days was enough to restore Patriot to its full potential and how much they can do in two days of practice on the water.

They were quite unlucky in terms of the damage that they incurred with the hole in their hull as that's what took out all the electronics and needed the most attention.

They would've spent between four and six days alone re-wiring Patriot so the question is how quickly they can de-bug everything.

In a perfect world, they would plug it in, and it would all go as planned and like it used to but it will take time to get everything right.

These boats are run off a computer — someone pushes a button, that button has a sequencing to it, and it most likely performs a hydraulic function — so to make that thing works is quite a major and there's a lot of pieces to the puzzle to get right.

It's not as easy as plug and play.

Regardless, like any sports team, American Magic will have learned more from this "loss" than from any of the wins in their campaign so far and there's no way they're worse off for it.

There's no ruling out American Magic yet. If anything, it's shaping up to be one hell of a comeback story.

Heading into the Cup racing?

• Give yourself plenty of time and think about catching a ferry, train or bus to watch the Cup.

• Make sure your AT HOP card is in your pocket. It's the best way to ride.

• Don't forget to scan QR codes with the NZ Covid Tracer app when on public transport and entering the America's Cup Village.

'The cheering was deafening': Hawke's Bay's love for Emma Twigg