National Party president Peter Goodfellow says the low number of women standing for National this election is partly because of the democratic process by which the party chooses its electorate candidates, but a number of women are in the pipeline who could be candidates in future years.

National released its party list yesterday and if it gets 60 MPs into Parliament after the election, just 16 - 27 per cent - will be women.

In its full party list of 75, 21 are women. It currently has 15 women in Parliament - about a quarter of its caucus. That is in contrast to Labour; 43 per cent of its caucus are women.

Mr Goodfellow said there were a number of women in the pipeline who were likely to be future candidates.

"We are working really hard in the party to ensure we have a good representation of women, but National do have a very democratic process for selecting candidates and there are a lot of factors for the list ranking committee to take into account, including the merits of the candidates and gender and cultural diversity."

Labour's rules require it to have at least 45 per cent women in caucus after the 2014 election and 50 per cent by 2017, although on its current polling Labour may just miss that target.

It had proposed holding some women-only selections to try to get more women elected in safe Labour seats rather than relying on the list to lift its representation. However, that was scotched after political pressure.

National expects to get at least 13 new MPs into Parliament after a significant turnover in which about 15 have left or said they will leave at the election.

Ohariu candidate Brett Hudson is highest ranked at 39, and the only newcomer to be ranked above some sitting MPs.

Other new candidates with high list placings include Mt Roskill candidate Parmjeet Parmar at 48 and Hutt South candidate Chris Bishop at 49. Both are likely to make it into Parliament off the party list.

Mr Bishop is a former ministerial adviser and worked in the tobacco industry before putting his name forward as a candidate.

Port Hills candidate Nuk Korako and Palmerston North candidate Jono Naylor are next in line at 50 and 51 respectively.

Newcomers standing in electorates which are currently held by retiring National MPs have been sent a clear message that they are expected to hold the seat - they have been ranked in unwinnable list places from 54 to 63. Mr Goodfellow said there was an expectation those candidates should win their seats, and they had been ranked alphabetically.

That is potentially bad news for Napier candidate Wayne Walford, who would need National to get about 49 per cent of the party vote to get into Parliament off the list.

While most of the other seats are deemed safe, many observers expect Labour's Stuart Nash to win Napier.

- Based on both list and electorate MPs if National gets 60 MPs.

Craig likely to go it alone

Conservative leader Colin Craig is set to be left out in the cold when Prime Minister John Key outlines which electorates National will do deals in today, but Peter Dunne and Act's David Seymour will get his blessing to win their electorates. 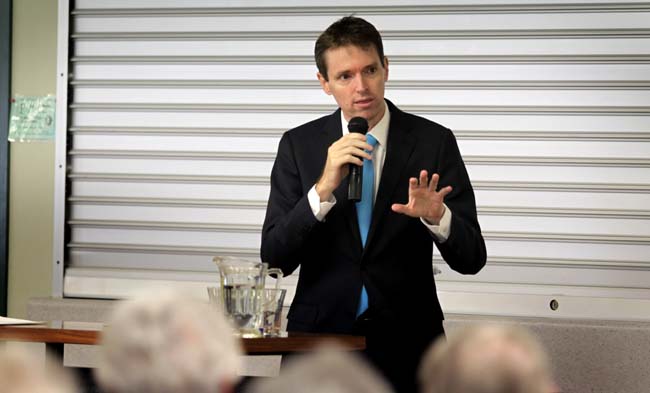 Mr Key is due to announce which seats National will tell its voters to support other candidates in today and the party's list rankings out yesterday make it clear he will again give the nod to National voters in Epsom and Ohariu to vote for Act's David Seymour and United Future's Peter Dunne respectively.

However, National is not expected to do a similar arrangement with Mr Craig in the East Coast Bays electorate. The Conservatives were at 2 per cent in last night's Colmar Brunton poll and 1.2 per cent in last week's Herald DigiPoll.

That is enough for at least two MPs in Parliament, more than Act or United Future are likely to deliver. However, there is concern in National that an association with the Conservative Party could lose National a portion of its softer supporters who are strongly opposed to the Conservatives and their more radical stances on issues such as gay marriage.

Mr Craig has not helped his cause within National by setting out in advance some 'bottom lines' such as binding referenda, and attacking National in its advertising material.

Mr Craig said yesterday he did not know what National's decision was and had not discussed it with them. He said he would be more surprised if they did pull Mr McCully out than if they didn't.

Mr McCully's election hoardings were already up around the electorate. "I've never expected them to make an accommodation. That's not on our playlist. We've understood it's a possibility but I'm not going to be surprised or disappointed if he says Murray is running. I might be more surprised if he says he's not."

He said his main strategy was to try to get above the five per cent threshold, and he was hoping to lift the party's support in the electorate to 15 per cent from 5 per cent in 2011.
Any arrangement in East Coast Bays would likely require National to withdraw Mr McCully altogether if it was to work because of the strong incumbency factor.

Mr Key has been resistant to doing that in Epsom and Ohariu in the past because of the risk of a backlash from National voters who could not stomach voting for another party's candidate.

There was also concern that if Mr McCully withdrew another centre-right candidate could enter the race as an independent or for another party who could take the seat if more popular than Mr Craig.

NZ First leader Winston Peters has not ruled out standing in East Coast Bays himself if National went ahead with the deal. Yesterday he said he would announce which electorate, if any, he was running in within a fortnight.

He said such deals were "a disgrace to democracy, unseemly, indecent, improper and egregiously self-serving behaviour."

Although Mr McCully will be overseas as Foreign Minister for most of the campaign, Mr Craig said he did not realistically believe he could win the seat without Mr McCully withdrawing.

National is highly unlikely to withdraw its candidates from Epsom and Ohariu, but they are highly ranked on the list to ensure they will get into Parliament. Ohariu candidate Brett Hudson is the highest non-MP on the party's list and the only one who is ranked above some sitting MPs in 39th place.

Epsom candidate Paul Goldsmith is ranked at 30 - nine slots above his 2011 ranking. Both will enter Parliament on current polling.

'Stocking up for the apocalypse': Massive supermarket queues in coronavirus panic

"As the gateway to NZ, a case of the coronavirus in Auckland was close to inevitable."
NEW ZEALAND | Politics