Whether you’re looking to buy or rent, OneRoof.co.nz has everything you need to find your dream home.
© Copyright 2020
NZME. Publishing Limited
test test test
The day 'all hell broke loose'
17 Sep, 2014 4:50pm 4 minutes to read

- Key concedes claim NZ data may be accessible through XKeyscore
- Says NZ contributes some information to Five Eyes databases
- "But not mass, wholesale surveillance as people might say"
- No evidence of mass surveillance, says security chief
- MORE: NZ 'spied on friends for US'

Prime Minister John Key says he can't give an absolute assurance New Zealanders are not subject to mass surveillance by the US National Security Agency (NSA) but he is "comfortable" that is not happening.

Mr Key this afternoon said he was "sure it's absolutely true" that former NSA analyst Edward Snowden had the capacity to see information about New Zealanders when he worked for the agency, but that information would not have come from mass surveillance programmes run by this country's Government Comminications Security Bureau (GCSB).

Advertisement
Advertise with NZME.
Renegade former US intelligence analyst Edward Snowden claimed his former employer spy agency National Security Agency has a facility in Auckland. Snowden, who is sheltering in Moscow from US attempts to extradite him on espionage charges, appeared by video link before a capacity crowd at the Kim Dotcom organised Moment of Truth event at Auckland Town Hall. Footage The Moment of Truth/YouTube

During Monday night's Kim Dotcom-sponsored "Moment of Truth" Snowden claimed that as an NSA analyst stationed in Hawaii some years ago, he regularly came across New Zealanders' data held in the agency's XKeyscore system.

Snowden claimed at least some of that information was gathered via mass surveillance programmes the GCSB was involved with.

Mr Key has continued to deny that and pointed to Inspector-General of Intelligence and Security Cheryl Gwyn's statement this morning that she had "not identified any indiscriminate interception of New Zealanders' data in my work to date".

"It's pleasing to have someone that's completely independent of the political process coming out very clearly and very strongly saying there is no evidence to support there has been mass surveillance by the GCSB of New Zealanders", Mr Key told reporters this afternoon.

''I hope New Zealanders will accept my word on it because it's absolutely correct ."

He said Ms Gwyn had powers to "see under the covers" of what was happening with New Zealand's spy agencies, but not what other countries did.

The price of the Five Eyes club

"We've always said there are other agencies around the world that either legally as a result of their own laws, or illegally will be out there potentially collecting information on New Zealanders.

"I'm not aware of that but there always could be."

Asked whether he could rule out mass surveillance of New Zealanders by the NSA he said: "I don't run the NSA any more than I run any other foreign intelligence agency."

"The NSA is bound by the laws of the United States of America... I'm not responsible for that. I can't control that and I don't influence that." 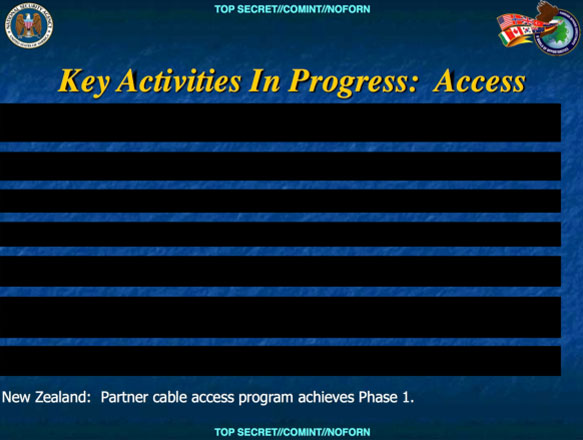 Screengrab of NSA materials on Speargun / The Intercept

However he said he was "very comfortable in the knowledge that I have, that I do not believe that's taking place".

When asked about the XKeyscore system on Radio New Zealand this morning, Mr Key said there were a number of devices and programmes used by the GCSB but he would not go into details.

"However, what I can say in terms of those kinds of Five Eyes databases is yes New Zealand will contribute some information, but not mass wholesale surveillance as people might say."

Addressing Snowden's claims, he said: "I think the point he was making was in that shared database he said 'I regularly came across information about New Zealanders' - that may well be right".

"That's not true, we're not collecting wholesale information. We don't have the capability for mass surveillance", Mr Key said.

Information about New Zealanders supplied by the GCSB to the Five Eyes intelligence-sharing network was limited to that gathered under a warrant.

"You could not gather information about New Zealanders without a warrant," Mr Key said.
"But one thing I can say , we don't control what other agencies and other people collect; so it's true there will be New Zealanders there and Americans may have gathered information across a whole lot of reasons legitimately that they gather for hundreds and hundreds of countries.

"But what is absolutely also true is we can't circumvent our law, so we don't use a foreign agency to go and do something." That meant New Zealand agencies could not access information about New Zealanders gathered by foreign agencies without a warrant.

In response to Ms Gwyn's statement this morning, US journalist Glenn Greenwald who has worked extensively with Snowden to expose alleged mass surveillance by the NSA told the Herald, "I don't know what she's seen or hasn't seen but she should take a look at the evidence we've produced as part of our reporting".

"That made very clear that the project that the NSA and GCSB were working on and proceeded to take steps to implement was a project of mass surveillance - was she aware of Project Speargun?"

Greenwald said there was "a history around the world when we've done reporting of the people who are responsible for overseeing these agencies being kept in the dark." "I don't disbelieve her that she's never seen it, but that just means she hasn't seen the evidence."

Mr Key has said their information is incomplete and refers to a wide-ranging cyber security project that was scaled back amid concerns it would be perceived as a mass surveillance tool.

Greenwald has said he will soon produce reports detailing GCSB surveillance of friendly countries on behalf of the United States.

The reasons for doing so included ensuring the security of "sporting teams going to a particular location that might be at risk" and keeping tabs on "foreign fighters".

"Over successive governments I think I've got a pretty good sense of where and why that intelligence has been gathered and I'm comfortable that it's been directed in the right place." Asked whether he was preparing for a backlash similar to that when it emerged last year that Australia had spied on Indonesian leaders, Mr Key said he wasn't.

"Most countries would expect that for a variety of reasons, intelligence is gathered."

This afternoon, Dotcom tweeted that if the Government changed this weekend the Internet Mana Party would work with Labour and the Greens "to get Edward Snowden asylum in New Zealand".

Snowden is currently in Russia sheltering from US efforts to extradite him on espionage charges.

The Prime Minister will chair a full cabinet meeting today but most will join remotely.
NEW ZEALAND

COMMENT: Case numbers will continue to rise in the next two weeks.
NEW ZEALAND