Although he long had the reputation of a "one-man Joy Division" or "Laughing Len" in reference to his gloom-soaked melancholy, Leonard Cohen always had a self-deflating streak. Here the 80-year-old starts with Slow: "It's not because I'm old, it's not what dying does, I always liked it slow, slow is in my blood". And of course coming from croaking Cohen it sounds dead sexy as he rides the low blues mood.

Even the darkness here has a self-referencing sardonic touch as on the bleak Almost Like the Blues which offers a catalogue of horrors from our world (starvation, rape, killing, the Holocaust) but which includes "all my bad reviews" with the pay-off that these things are "almost like the blues".

Ambiguity, shifting perspectives and seeing the world from your own disadvantage point appear throughout, as on A Street (co-written with Anjani Thomas) where the catalogue of images includes a lover who looks so good in a uniform "I didn't care what side you're fighting for" and "the ghost of culture with numbers on his wrist".

Such political and religious allusions are Cohen's metier, and here are suggestions of failed faith and ambivalent passions, a king in a bloody crown, a metaphorical war neither won nor lost (Nevermind) and as always love of various kinds.

In places he sounds like the younger Tom Waits (the piano ballad Did I Ever Love You), but his default position is the speak-sing poetry where the flexible soundbeds by Patrick Leonard nod towards to blues (Slow, A Street), Civil War ballads (Almost Like the Blues), New Orleans bands and country music (My Oh My), sultry funk (Nevermind) and the hymnal (Born in Chains) ... And everywhere Cohen reports back as a witness to the timeless history or emotions being explored.

The lovely You Got Me Singing is the perfectly optimistic closer on an album which goes to dark places: "You got me singin' even tho' it all looks grim, you got me singin' the Hallelujah hymn".

Cohen is a singular artist and - like Waits, Marianne Faithfull and Bjork - is of rock culture but never part of it. He's all mystery, koans and questions.

So don't come here for straight talk, solutions and certainty. 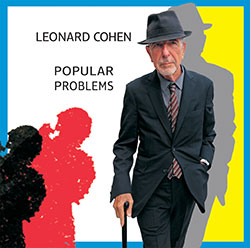 Label: Sony
Verdict: Another report from the wounded heart and awakened soul

Two major law changes have been pushed through for the Super Rugby Aotearoa competition.
BUSINESS

Carole Baskin has won the right to take over Joe Exotic's former zoo.